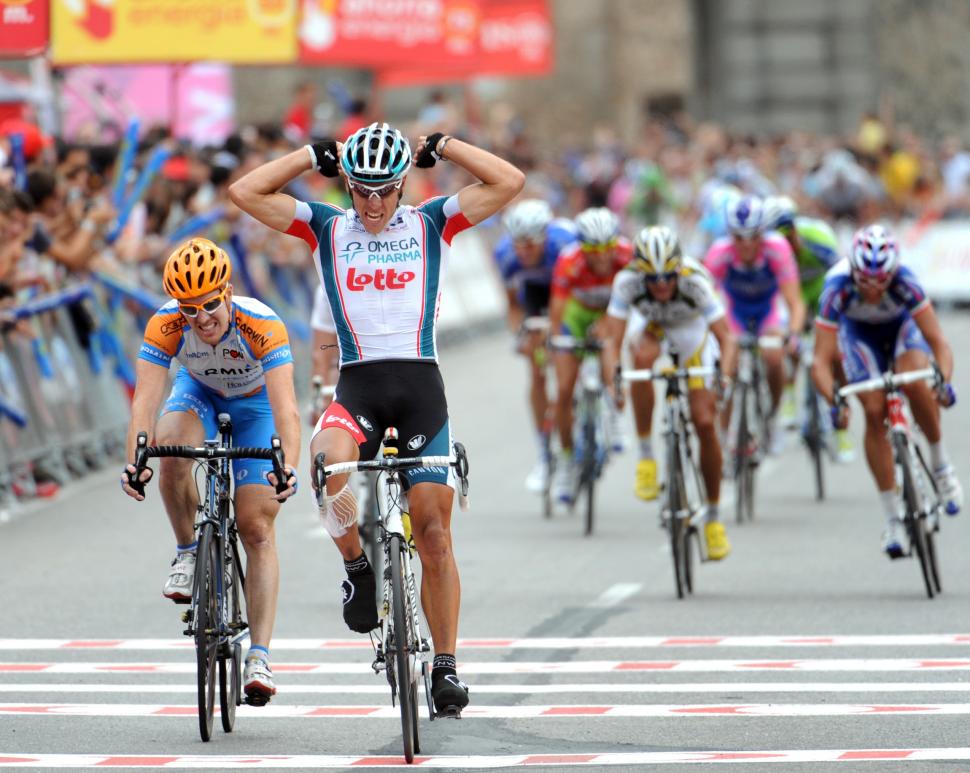 One of Spanish cycling’s all-time great cyclists, Federico Bahamontes, winner of the mountains classification in all three grand tours and the overall title in the Tour de France but never destined to wear the rainbow jersey, today paid tribute to the man many believe to be favourite to win the World Road Race Championship in a fortnight’s time, Philippe Gilbert of Omega Pharma-Lotto.

Aged 82, Bahamontes nicknamed ‘The Eagle of Toledo,’ watched the Belgian take Stage 19 of this year’s Vuelta in his home city, and said afterwards: “This was an extraordinary stage finish with a big crowd and a great winner. In the final climb, it was impossible for a team to lead out, so it’s obviously the strongest rider who won it.

Bahamontes continued: “I don’t personally know Philippe Gilbert but he knew the finish in our town of Toledo because he’s been here last year. In the steepest part of the climb, he gained six or seven metres and that’s why his win looked easy.

Gilbert attacked with around a kilometre to go as the peloton began to split up due to a result of a difficult twisting and undulating end to the stage as it headed towards the centre of the medieval city, with Luis Leon Sanchez of Caisse d’Epargne the first rider to show his hand

“Luis Leon Sanchez was the most dangerous guy there but there was a head wind and when I saw [David] Millar doing the hard work of the chase, I was quite happy because I know his skills when it comes to driving the bunch,” said Gilbert.

“I decided to open the sprint for far out,” he continued. “I thought it was the best way to beat Tyler Farrar.” The American finished second, and with Mark Cavendish arriving 17th and out of the points, the Garmin-Transitions rider cut the Manxman’s lead in the race for the green jersey to just 12 points, meaning that the points competition will remain very much alive until the end of the race in Madrid on Sunday

Looking ahead to next month’s World Championship road race between Melbourne and Geelong, Gilbert, who today took his second stage win of this year’s Vuelta, said: “I’m not hiding before the world championship because I made my seasonal choices at the beginning of the year and everyone has understood that after the Spring classics, I’m focusing on the World Championship only. There’s no surprise. I’m in the right timing. I’m in a perfect shape and I hope for the best outcome in Australia.

Race leader Vincenzo Nibali revealed that he had benefited from some expert local knowledge regarding the run-in to Toledo, and profited to not only finish sixth on the stage, but also increase his lead on Ezequiel Mosquera of Xacobeo-Galicia by 12 seconds to 50 seconds ahead of Saturday’s decisive Stage 20 ascent of the Bola del Mundo outside Madrid. 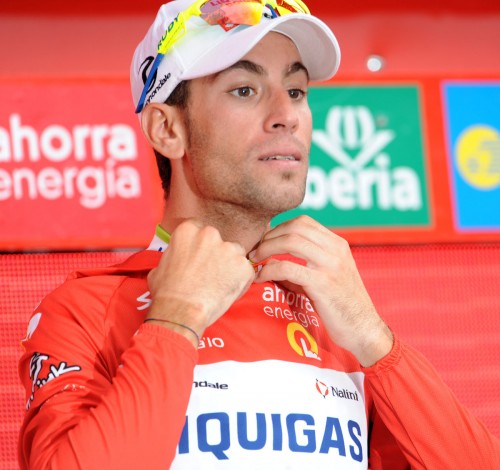 “Yesterday Federico Bahamontes came to the start and described today’s stage finale to me,” explained the Liquigas-Doimo rider. “I’m grateful for that because it helped me. Knowing what it was like, I put myself at the front in the last 10 kilometres with Daniele Bennati close to me all the time, so I felt safe. I’ve seen a gap was being created, so I went full gas. To gain 12 seconds in such a short distance is a big bonus before tomorrow. I feel much better with a 50 seconds margin, although I know Bola del Mundo is going to be hard.”

Mosquera, for his part, insisted that he had done as much as he could today, given the circumstances. “There was so much tension in the last kilometre. When we reached the curves, I was side by side with Fränk Schleck and I almost fell when he punctured. I was at the limit. I couldn’t do more. In this kind of uphill finish, Nibali has a better jump than me. My team-mate David Garcia has done his best to bring me back up but when we passed over the last bridge, I almost couldn’t breathe anymore.”

Referring to the climb up to Bola del Mundo which gives him one last chance to beat Nibali ahead of Sunday’s procession into Madrid, Mosquera added: “Tomorrow I’ll have to attack. I hope for a good day and good legs. I look serene but I’m not. I’m very nervous and I find it hard to sleep at night. If I lose the Vuelta, I hope it won’t be for less than twelve seconds, otherwise what has happened today would be too bitter.”

Xavier Florencio of Cervélo TestTeam was one of four riders involved in an escape earlier on in the stage (pictured below), although as has happened throughout this year’s race it was allowed to go out before being steadily reeled back in ahead of the finale. 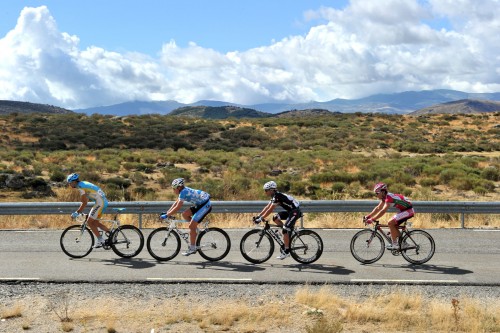 “We’ve had ten minutes lead but four riders in the break, that was not enough with the head wind we faced.,” complained Florencio afterwards. “When I heard that the teams of the sprinters went to the head of the peloton, when I heard HTC-Columbia and Omega Pharma-Lotto, I understood that it was game over.”

One rider racing on familiar roads today was one of Florencio’s team mates, Carlos Sastre, with the route passing through the region of Ávila and El Barraco, the village he grew up in.

Among the fans lining the roadside was a group (pictured below) paying tribute to another local, José María Jiménez, nicknamd ‘Chava,’ four times mountains classification winner at the Vuelta, who began racing at the same time as the Cervélo TestTeam rider at the Ángel Arroyo cycling school, founded by Sastre’s father; the two cyclists would remain close – eventually becoming brothers-in-law – until Jiménez’s untimely death in 2003 at the age of 32. 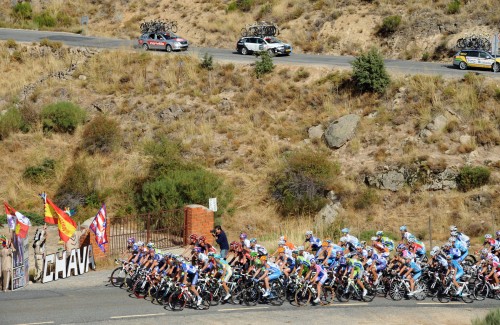 After today’s stage, Sastre said: “Being near my family and going through my hometown today was a really special and great feeling after being away from home for over two weeks. Today’s stage was long. It has been a pretty amazing marathon but we were lucky with the weather, which actually stuck the whole way through the day.”

He continued: “Finally, there was an explosive finish in Toledo, which led to a few cuts in the groups. Tomorrow we’ll be reaching the Bola del Mundo and that is my last chance to try for a stage win in this year’s Tour of Spain. That is what I want and what I’m aiming for.”