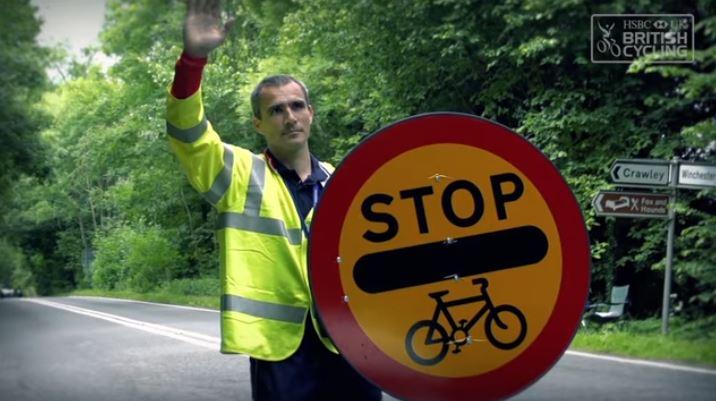 Four in five police forces across the country will help ensure the safety of people taking part in cycle races as well as other road users this year by backing a ‘STOP – CYCLE RACE’ sign at races on public roads, says British Cycling.

The signs will be used by British Cycling-trained Accredited Marshals, with it being a legal requirement for drivers to stop when they see a marshal holding it.

Those who fail to do so may face prosecution.

The scheme is supported by the National Police Chiefs’ Council (NPCC), whose lead for cycle safety and cycle racing on the highway, Andy Battle - assistant chief constable of West Yorkshire Police - commented: “The Accredited Marshal Scheme was developed by British Cycling in conjunction with the Department for Transport and the NPCC to provide a safe, sustainable and effective method of traffic management at road race events.

Among the police forces endorsing the scheme is Avon & Somerset Constabulary, which said: “The scheme, in conjunction with the professional risk assessments provided and the excellent pre-race briefings given by race organisers, makes each event much safer for both riders and road users.

“All road users should be aware that stop signs used under the Accredited Marshal Scheme should be treated in the same way that you would a red traffic light.

“Failure to comply with this sign is a traffic offence, which could lead to prosecution.”

Jonny Clay, director of cycling at British Cycling, said: “Accredited marshals only stop traffic for a short period of time in order to make junctions safe for the passing of the race, having minimal impact upon other road users.

“Drivers will have adequate notice they are approaching a traffic control with ‘Caution Cycle Event’ and ‘Traffic Control Ahead’ roads signs being placed ahead of each accredited marshal, who will be dressed in high visibility clothing.”

He added: “We have had a great response to the scheme from drivers. We appreciate their patience and understanding in allowing the safe delivery of cycle races on the highway, and would ask them to spread the word about the scheme.”

According to British Cycling, the scheme will apply to the following police force areas during 2018:

This video from British Cycling gives more details of the Accredited Marshals scheme, including contributions from several people who have qualified through it.