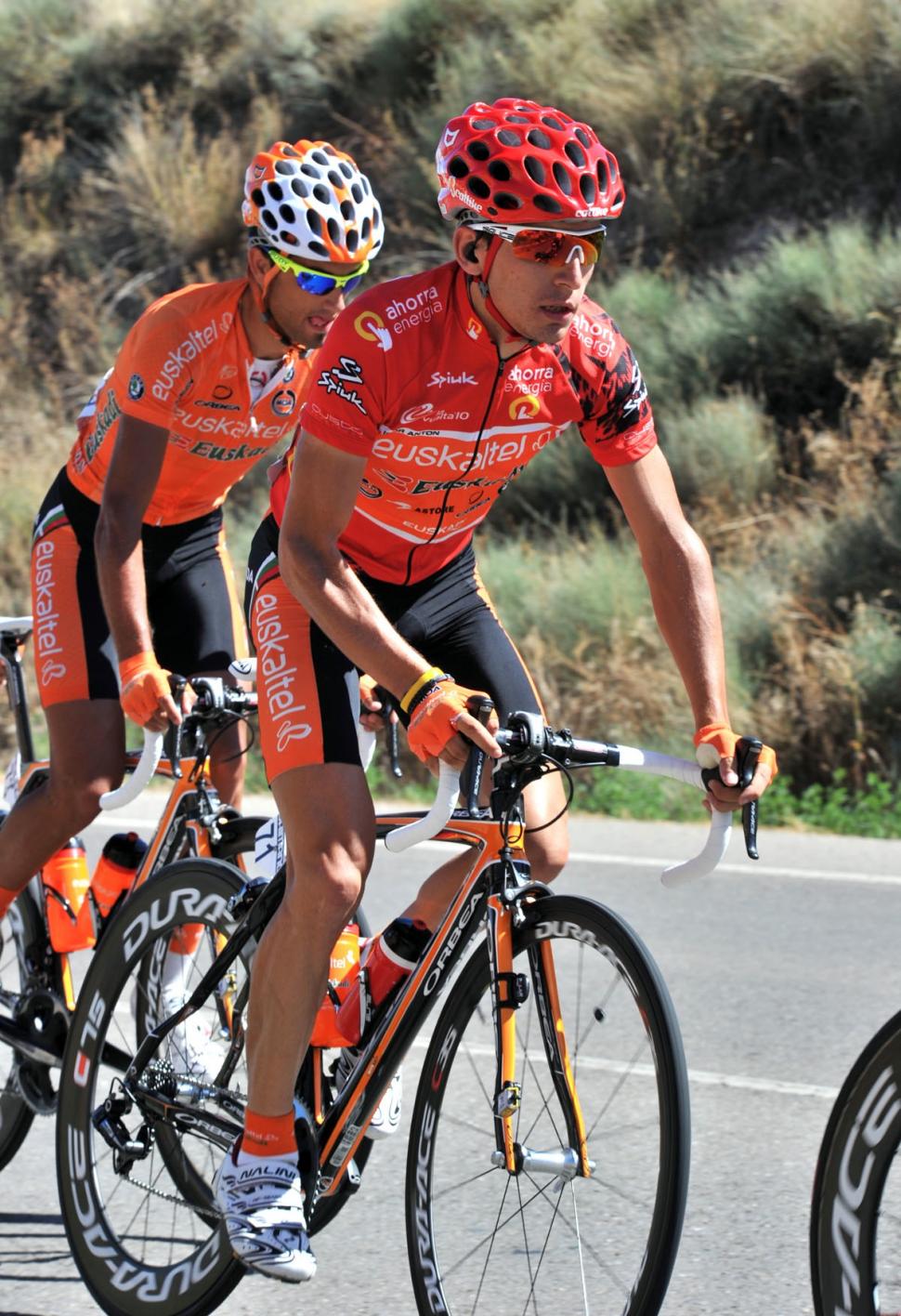 Igor Anton during Stage 13 of the Vuelta (copyright Unipublic:Graham Watson)

Jouaquin Rodriguez of Katusha won Stage 14 of the Vuelta a Espana on the summit of the Peña Cabarga amid dramatic scenes as race leader Igor Anton of Euskaltel-Euskadi crashed out of the race after apparently touching the wheel of team mate Egoi Martinez at high speed as the peloton jostled for position ahead of the final climb.

Anton, his red leader's jersey ripped to shreds and bloodied from a number of cuts to his arms and body after the fall sat disconsolately in the team car, his dreams of victory in Madrid next Sunday shattered around 7km from today's finish, while Martinez, who was conscious after the crash, was put on a stretcher and placed in an ambulance to be taken to hospital.

Earlier, with the green, tree-filled vista of the Cantabrian mountains that formed the backdrop to today's stage contrasting with the parched slopes seen further south during the opening week of the race, once again it was serial escapee Niki Terpstra of Milram, involved in yesterday’s break, who got off the front as the peloton headed due north from Burgos towards the summit finish in the hills above teh port of Santander.

The Dutch national champion made his move 40km into the 178km stage after a number of earlier escape attempts by riders including Katusha’s Filippo Pozzato had been brought back, and after 25km of riding on his own he was joined by the Garmin-Transitions duo of David Millar and David Zabriskie.

At one point, the trio had built a lead of more than 12 minutes but as the stage progressed, the teams containing the main overall contenders stepped up the pace ahead of the final ascent, which should have seen Anton battle it out with his rivals to try and retain the red jersey, but as he stood by the team car following his crash, it quickly became clear that his Vuelta was over in the most crushing circumstances.

Zabriskie was the first of the escapees to be caught, some 20km from the finish, with Millar reeled in early on in the ascent of the Peña Cabarga, and Terpstra managing to hang on until 2km from the summit.

From that point, the race belonged to the big guns in the GC, Ezequiel Mosquera of Xacobeo-Galicia attacking first,  followed by Liquigas-Doimo's Nibali, but in the end it was the Katusha rider Rodriguez who took the stage, with the orange-clad fans of Euskaltel-Euskadi who lined the slopes of the climb waiting vainly for their man Anton to come through.

Nibali followed Rodriguez over the line to ensure that he will take over the red jersey from the unfortunate Anton, with Mosquera finishing third.

Among the other riders to benefit today were Nico Roche and Frank Schleck, who move up from ninth and tenth in the GC to, respectively, fifth and sixth, while David Moncoutié's fourth place on the stage has helped consolidate the Cofidis rder's lead in the mountains classification, which he won last year.

Meanwhile, the points competition now seems likely to have come down a straight fight between HTC-Columbia's Mark Cavendish and Tyler Farrar of Garmin-Transitions following Anton's abandonment, with the Manxman currently holding a 21-point advantage.