Research by Strava confirms coffee and cake as the UK cyclist’s treats of choice, helping riders clock up a collective 903 million kilometres on the social network in the year to October, with London’s Regent’s Park hosting the most popular segment, followed by Herne Hill Velodrome.

It’s the first time a velodrome has made it into the country’s top three segments – it lies above Richmond Park, which is third – and is proof, Strava says, of the success of the venue’s recent redevelopment.

Just over a quarter of a million rides in the UK were recorded as commutes each week, and total commuting distance over the year was 173 million. The average distance of a commute was 13.1 kilometres, ridden at an average speed of 22.1 kilometres an hour.

The fastest cyclists can be found in Ceredigion in Wales, where the average speed was 33.6 kilometres an hour, while the longest rides were undertaken in Ballymena in Northern Ireland, with an average speed of 51.2 kilometres.

A shade under 5 million rides were logged by cyclists in London, almost five times greater than West Yorkshire, which was in second place, just ahead of Manchester.

For the first time, Strava has also analysed people’s posts to find out what Britain’s cyclists are eating and drinking – and it’s not much of a surprise to find coffee and cake topping the list in terms of mentions. 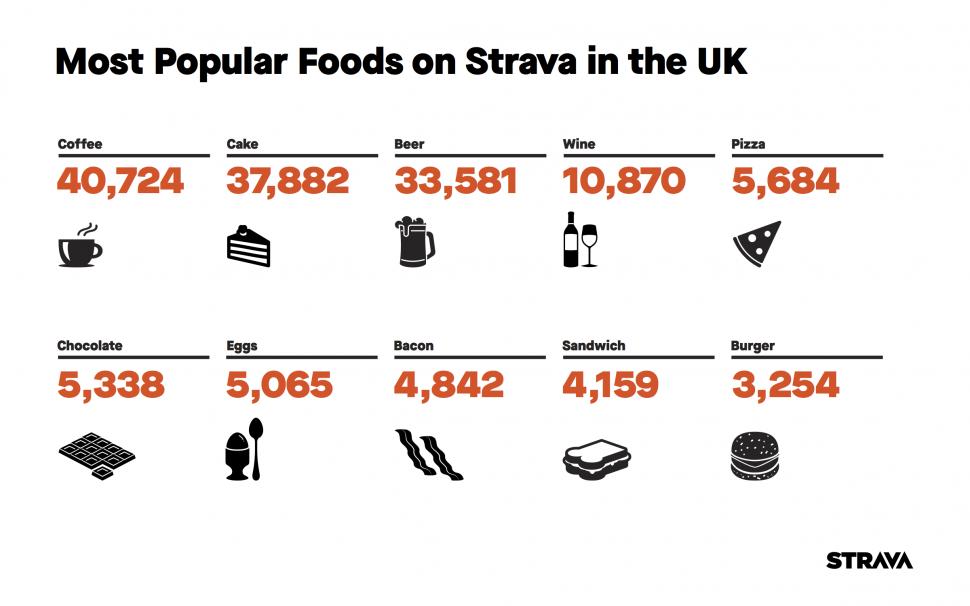 “Each of the 31 million rides recorded this year tells a story, from Mark Beaumont’s epic ride around the globe, to the fact that finally have statistical evidence that UK cyclists are obsessed with coffee and cake!”

Globally, a total of 203 million rides were shared on Strava this year for a total of 7.3 billion kilometres with a collective height gain of 69 billion metres. The most popular day to ride? That was 21 May.