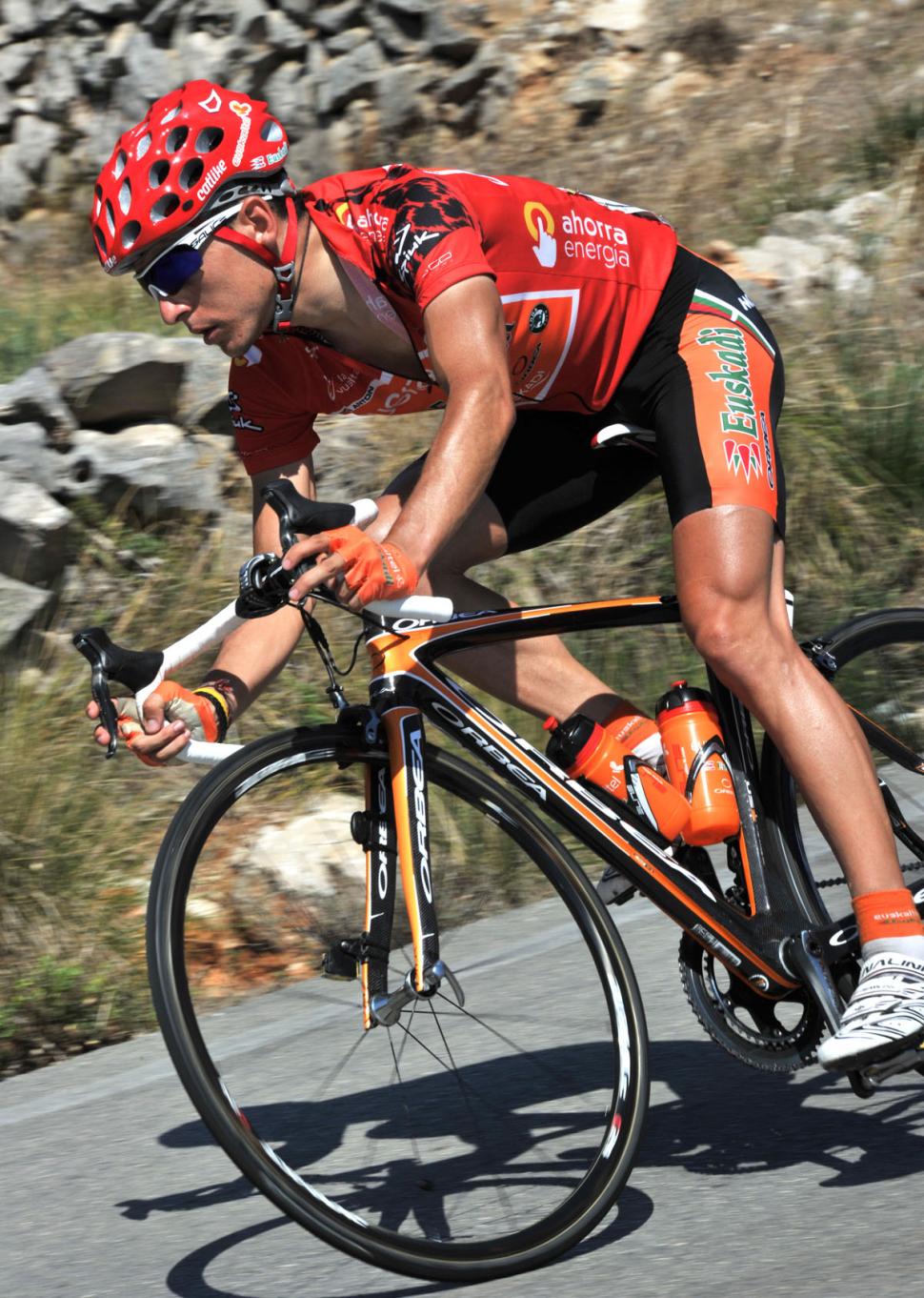 Igor Anton in the leader's jersey of the 2010 Vuelta (copyright- Unipublic:Graham Watson)

Vuelta Stage 11: Igor Anton makes comeback to win in Andorra and get back in red jersey

Igor Anton of Euskaltel Euskadi staged a remarkable recovery after apparently being in trouble on the final climb of today's Stage 11 of the Vuelta a Espana in Andorra, only Ezekiel Mosquera of Xacobeo Galicia managing to stay with  the Euskaltel-Euskadi rider who crossed the line three seconds ahead to claim his second stage of this year's race.

Anton, who lost the leader's red jersey for the last two days before ceding it yesterday to Joaquin Rodriguez, is now back in the overall lead as the Katusha rider found the pace too much to cope with on the day's final climb and went backwards, losing a full minute on his rival.

Initially, Anton appeared to be one of the riders in trouble - Denis Menchov, whose Rabobank team had worked tirelessly to reel in the day's break was another - after Mosquera launched his attack with 5km left,  only Vincenzo Nibali of Liquigas able to stay with him and the Euskaltel-Euskadi rider dropped off the back of the chasing group.

However, his spirits were revived as Katusha’s Joaquin Rodriguez, who had taken the overall lead off him yesterday, ground almost to a halt ahead of him as he too struggled with the pace, and Anton quickly passed the Catalan rider and headed off in pursuit of Mosquera, who had dropped Nibali as the Sicilian too found the pace too much to handle, eventually overtaking the Xacobeo-Galicia rider to take the win.

To many of the riders, most of the final 60km of today’s stage would have been familiar from Stage 7 of last year’s Tour de France which departed from Barcelona, although the routes differed on the final climb negotiated after the capital, Andorra La Vella, today’s itinerary taking them up to Pal instead of Arcalis.

Today was the only true Pyrenean mountain stage of this year’s race – tomorrow it’s back into Spain via the Category 2 Col de Boixols for a likely sprint finish in Lleida – with the big tests for the climbers taking place in the Cantabrian mountains over the weekend.

Two riders, Johann Tschopp of Bbox Bouygues Telecom and the young FDJ rider, Mickael Cherel, got away on their own around 50km into the 208km stage and at one point had an advantage of 13 minutes over the peloton.

However, they were gradually reeled in as the race headed into Andorra and although Astana’s Dmitriy Fofonov made the catch with 9km to go, the peloton was moments behind and the trio were caught shortly afterwards.

Despite being a stage where victory was always going to go to a climber, there was also drama in the points competition, with Philippe Gilbert and Tyler Farrar both picking up points during intermediate sprints, HTC-Columbia’s Mark Cavendish missing out.

By taking his second stage win of this year’s race, it’s Anton who tops the classification tonight but Gilbert, in second place, will wear the green jersey tomorrow. Cavendish drops to third, with Farrar fourth, but both will be vying for maximum points in Lleida tomorrow.