Signs telling cyclists to dismount have been removed across Northumberland following a complaint from a rights-of-way expert that one sign was unlawful.

Alan Kind spotted a "cyclists dismount” sign, near Simonburn, and wrote to the county council warning them that putting such a notice above one for a cattle grid was not permitted.

As a result, Northumberland County Council has now promised to remove 269 similar signs.

According to BikeBiz, Mr Kind received a response: "Local Transport Note 2/08 ­Cycle Infrastructure Design ­also indicates that the cyclist dismount sign should be used in relatively rare situations where it would be unsafe or impracticable for a cyclist to continue riding.

The reply added: “As a result of incidents reported to the County Council by cyclists at this particular location, officers considered it was necessary to advise cyclists to dismount and walk over the cattle grid rather than risk potential injury whilst riding across it especially during inclement weather conditions, hence the introduction of these advisory signs.”

There were 133 other similar signs over cattle grids in the county, and Mr Kind informed the council that these signs could only be used at "the end of, or at a break in, a cycle track or route."

Mr Kind added "if the cattle grid is dangerous, then it needs to be repaired."

Back in 2014 we reported on Peter Salter who got in touch with the contractors of some road works in Westminster to tell them why their cyclists dismount sign was wrong.

Peter took action after spotting this sign on long-term roadworks outside the Royal Courts of Justice on London’s Strand: 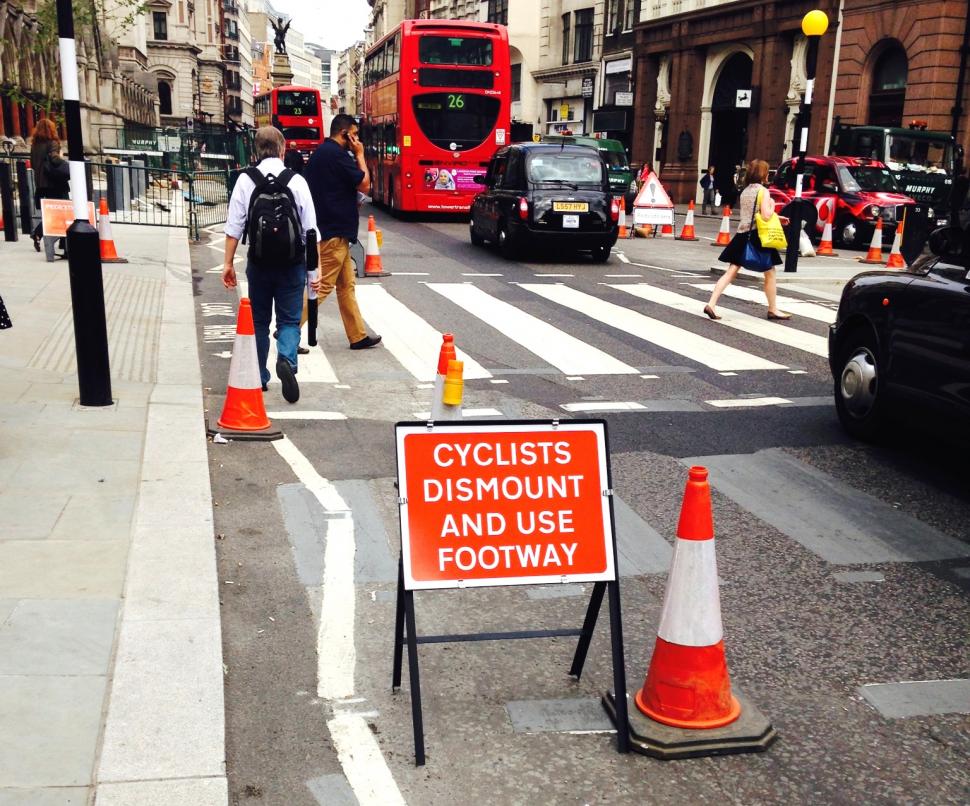 He told us: “I emailed the contractor, Murphy, and Westminster to say I thought these signs were all wrong. They implied cyclists had no right to be on the road.

“If a cyclist ignored the sign, a driver who hit them would point and use the sign to deny responsibility. Further, pedestrians do not like cyclists walking with their bikes on the pavement.”

As it happens these signs are not recommended by the Department for Transport either.

Peter continued: “Within 48 hours, I got a positive response and the following signs now appear on sites within Westminster: