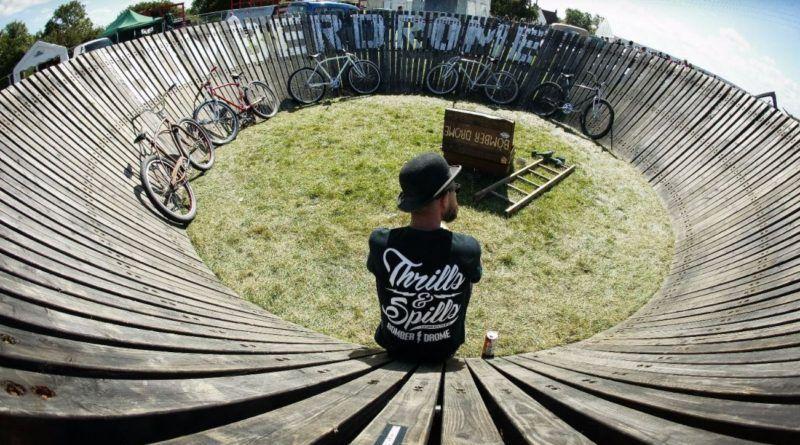 Got a big garden? Bicycle Wall of Death for sale on eBay! (+ video)

Alternatively, you could do what the Bomberdrome's builders intended - and take it round festivals and teach people to ride it...
by Simon_MacMichael

Have you got a big garden - as in big enough to accommodate this bicycle Wall of Death for sale on eBay?

The listing has five days left to run, with a current top bid of £285, and the buyer would need to collect from Northampton.

And even if you haven't got enough space in your own backyard to set it up and invite friends round for some thrills and hopefully not too many spills, you could do what the team who built it, a group of cycling enthusiasts called the Ministry of Bicycles, did - tale it round festivals and other events and teach people how to ride it.

Here's what the listing for what they call the Bomberdrome says:

Based on the granddaddy of The Wall of Death, The BD is I believe the only example in the UK.

We built it in 2012, which was a real labour of love, and over the last five years we have taken it to festivals including The Trip Out and Skegvegas VW show and countless other events, where we have entertained (sort of) and taught many hundreds of people how to ride it, it is a real joy bringer, countless people have come away with massive smiles on their faces and the best facebook profile picture they will ever have.

It has been featured in numerous publications including Boneshaker Magazine and Hayburner.

There's also a YouTube documentary showing how it was built.

The wall dimensions are roughly, 18' in the center, 26' externally, the height is roughly 5'.

It comes in eight panels that lock together via spigots and bolts, a couple of the spigots could do with looking at in the near future and possibly need a touch of welding and they could all do with being re-tapped for the bolts, there are three steel ropes to hold it altogether and we often run a large ratchet strap around the center for added stability, there are no external supports.

Due to the curvature of the individual panels, they WILL NOT fit in a van, luckily it comes with it's own VERY dubious trailer, which as yet has never let us down.

The sale is for the wall only, bikes and riders are not included in the sale I'm afraid.

Thrills and Spills with large helpings of Mild Peril are thrown in for free.

Last year, multiple BMX and track cycling world champion Shanaze Reade hit 26 miles an hour to set a new Guinness World Record on a bicycle on one of the UK's last remaining Walls of Death constructed specifically for motorcycles.

She set the record live on Channel 4 as part of the Guy Martin’s Wall of Death programme, which focused on the Isle of Man TT legend and general speed freak's own attempt on the motorbike record.