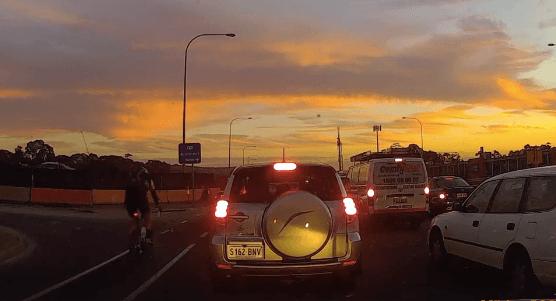 Who was in the wrong when this cyclist got T-boned?
by Sarah Barth

A film of a cyclist being totalled by a car turning into a junction after he undertook a line of stationary traffic has divided Australia.

The video, posted on DashCamOwnersAustralia’s Facebook page, shows a cyclist in Bedford Park, Adelaide speeding up the inside of two rows of cars.

The page admins wrote: “Cyclist has a lucky escape from serious injury after t-boning a turning car. He was shaken up but appeared largely unhurt."

Users were entirely divided, with fierce debate in the ensuing comments.

One wrote: “In my opinion, the cyclist brought that on himself.

“It seems it hasn't clicked for cyclists yet. That you need to take responsibility for your own safety on the road.”

Another said: “Cyclist had right of way, but should he really be riding that fast though an intersection that is backed up? Surely he can look ahead, see theres a gap and think "hmmm maybe i should look out for people coming through". It’s not like the car would of seen him anyway” [sic].

One was more sympathetic, saying: “I’m a cyclist and honestly this will happen without bike paths. The rider is going too fast and the car had no chance of seeing, even if he inched out. Its a 50/50. If I was riding id be slowing right down out of common sense.”

One more added: “Legally, car at fault, however, a little bit of common sense on the part of the cyclist would have been to slow down through that section.”