According to campaigners, the route from Old Street to Oxford Street sees 2.5 times as many bikes as all other vehicles combined, despite being stressful and unpleasant for cycling
by Laura Laker

A major London route, with 2.5 times as many cyclists in rush hour as all other vehicles put together, according to one count, could be transformed from a place people “literally run to get away from” into a showcase Healthy Street, according to campaigners.

Dubbed the London Boulevard by the London Cycling Campaign (LCC) for its strategic importance for cycling, the 1.9 mile stretch of road from Old Street to Tottenham Court Road, via Clerkenwell Road and Theobalds Road, sees 1152 cyclists per hour in the morning peak according to one count, and yet lacks any protected cycling infrastructure, beyond painted cycle lanes. According to a separate traffic count in 2013 cycles are 64 per cent of all vehicles in the morning peak.

The LCC says stepped cycle tracks along its length, as well as improved pavements, seating and trees, are achievable without significantly impacting motor traffic flows, and will release designs showing this imminently. A further option, they say, is to ban all traffic but buses and cycles from the route.

Camden Council, which owns a substantial part of the route, say although it is a priority it may be some time before improvements are made, and designs would need to carefully manage high traffic flows in a constrained space. Islington Council says it is working on a plan for the popular cycling and walking route, which will be released this year.

The LCC’s Simon Munk said: “You have got some of the highest cycling flows in London outside the cycle superhighways; well over a thousand cyclists at peak on some sections, and vastly outnumbering motor vehicles.” 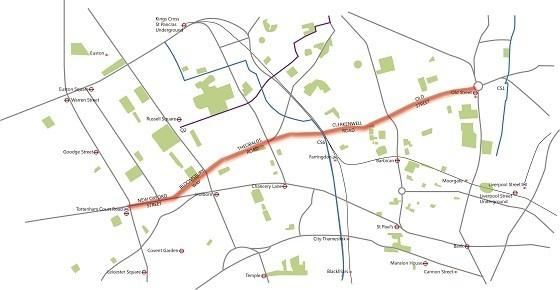 The route has long been one of London’s busiest for cycling but for LCC the Give a Beep campaign highlighted just how much cyclists were suffering to use it. Each “beep” from cyclists using specially designed bells to highlight places they feel uncomfortable, goes onto a digital map, and Munk says stressed riders were lighting the route up “like a Christmas tree”.

“If you look at that map it’s a huge scar across London,” he said. “It is a key desire line for cyclists, which is really stressful to ride and actually very dangerous.”

“We have some of these junctions, they have among the worst collision rates that I have seen in London. Cyclists are being swiped left, right and centre.”

In 2015 11 people were seriously injured cycling, and two killed, on the route's length.

Cyclists outnumber motor traffic, according to one count - while pedestrians are "literally running" to get away from the road

“As a cyclist it’s bad, as a pedestrian it’s even worse,” says Munk, adding people are “literally running to get away from” the road.

“At the junction of Roseberry Avenue, what you see is people scurrying into Costa Coffee and straight into work - they get off the street as quickly as they can.

“There’s seating outside Costa, the only people you see using it are Deliveroo riders.”

“The businesses along there are suffering, there’s mini cab firms with their windows boarded up; they don’t face the road because it’s so horrible.”

“They are surrounded by iconic buildings; there are parks nearby. This is a beautiful bit of London but to experience it to today it is congested, it’s polluted, the pavements are knackered, there’s guard railings.” 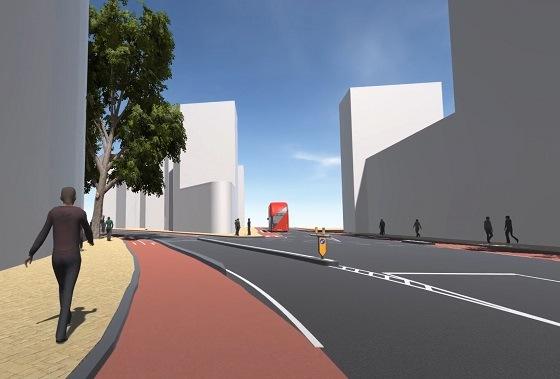 The LCC is working with a Dutch engineering company on the stepped track designs, which will be released very soon. A virtual reality (VR) rendering of how it would look if the changes were made (still image from VR, above) will be launched to coincide with Clerkenwell Design Week, 23-25 May. The LCC wants to show the VR to London Mayor Sadiq Khan to show how this could be a showcase of the new Healthy Streets approach, a framework intended to encourage walking and cycling. The scheme could also be an opportunity to improve last mile deliveries, and freight consolidation to reduce motor traffic, the LCC believes.

Key East West cycling corridor is a priority...but no for improvement

Major cycling and walking improvements are intended along the route, from Oxford Street and the West End Project, at one end of the route, to Old Street at the other. Construction work will start this spring on the northern extension of the hugely popular North-South Cycle Superhighway , crossing the "boulevard" at the midpoint.

Camden Council owns the roads between Farringdon Road and Tottenham Court Road. Camden Councillor Phil Jones told road.cc he recognises this key east-west corridor for cycling and welcomes the interest from the LCC. However, he says, there is no funding for a cycle route at present, and change cannot be made until the council’s West End Project is complete.

“Once Camden has completed its current transport priority of the West End Project, we view this area as the next priority for action," he said. "We have already been working for some time on redesign of the Holborn gyratory and making improvements to the Clerkenwell corridor, and are in touch with Islington and TfL about this.”

“This is a very challenging location given the volumes of vehicles and constrained road layout, so there will need to be careful design work and extensive engagement with road users and the local community to find the best solution. There is currently no funding allocated to us for a large project so it will be some time before major change is possible. In the short-term we are looking at making some safety improvements to specific junctions along the route and will consult on these in due course.”

An Islington Council spokesperson said: “We know this route is popular among cyclists and pedestrians and we’re keen to transform it to make it safer and encourage more residents and visitors to walk and cycle.

“We’re working closely with TfL and neighbouring boroughs to explore how we can achieve this and we aim to have our plans ready for public consultation by the end of the year.”

Munk welcomed Islington's public commitment to the route. He said: "It's great to hear that Islington are committed to moving forward with their part of the Boulevard, and we look forward to seeing plans. We hope that they will take some inspiration and ideas from our vision."