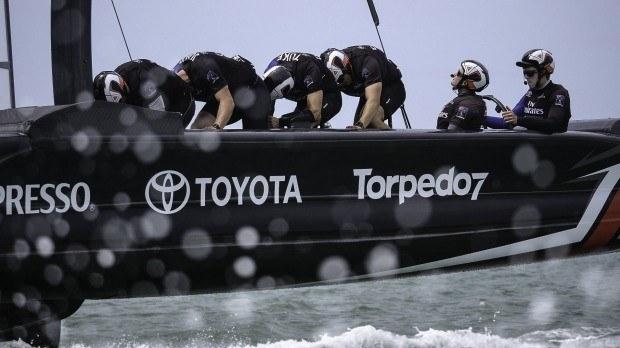 London 2012 bronze medal-winning track cyclist Simon van Velthooven has been signed up by Emirates Team New Zealand as it looks to harness pedal power to win yachting’s America’s Cup in Bermuda this summer.

The 28-year-old won bronze behind Sir Chris Hoy in the keirin in London five years ago, and has also secured medals at the Commonwealth Games and UCI Track World Championships.

Last year, he was approached by Team NZ, which was considering whether to use pedal-powered rather than the traditional hand grinding that powers control systems for the wingsail and foils.

His involvement was officially confirmed this week as the catamaran – complete with a four-man cycle station in each hull in what is a radical departure from existing designs – was unveiled in Auckland, reports Stuff.co.nz. You can see video of the crew pedalling away here.

The cyclist has played a central role in designing and testing the pedal-powered grinding systems as well as training crew members to ensure they get maximum power output from their legs.

But for the past 12 months, he has had to keep quiet about his role in the America’s Cup bid, which will see Emirates Team New Zealand and other challengers including Great Britain's Jaguar Ben Ainslie Racing compete in the Louis Vuitton Cup in Bermuda in May and June, with the winner then taking on holders Oracle Team USA.

"I wasn't selected for the [track cycling] world champs in February-March last year and they rang me up and asked me to come test," he explained.

"I did a bit of testing, then it went quiet for a wee while over the winter and then I went back up at the end of 2016.”

Initially he had no idea why the team wanted to speak to him. "It wasn't until I came here and they told me,” he revealed. “I thought it was a great idea. It's been a long 12 months," he added, referring to the need to keep tight-lipped.

He hinted that the marginal gains approach that took Team GB to Olympic success in the velodrome had also been adopted for the America’s Cup challenge.

"There's great banter in the team, there's good morale here, everyone is putting 100 per cent in to get those one per cent gains.”

Team NZ skipper Glenn Ashby said: "Simon has done a fantastic job coming in and raising the bar for us as a sailing team as far as the training aspects and power-wise.

“The other guys have stepped up and are putting out big numbers now.”

"He has been a fantastic asset.  He's had to keep his head down too as far as keeping this secret," he added.

The America’s Cup is named after the boat that in 1851 won a challenge race off the Isle of Wight organised by the Royal Yacht Squadron.

Now held every three or four years, it was only in 1983 that a challenger yacht – Australia II – won the trophy to break the New York Yacht Club’s grip on it.

In 1995, the Royal New Zealand Yacht Squadron’s mounted a successful challenge with the boat NZL 32, also known as Black Magic, and Auckland hosted the America’s Cup in 2000 and 2003.

“It was every Kiwi kid's dream to be on an America's Cup boat. There's huge legacy for New Zealand with the America's Cup. I mean, I'm sure everyone here wants to be on the boat as well, so of course I said yes."

He said that he had been on the water before, in his uncle’s boat and through Outward Bound classes.

"But this isn't sailing, this is a war machine,” he added. “It's not a sail boat at all, there's nothing like it in the world at all. Hopefully over there we are going to hit 100kmh."