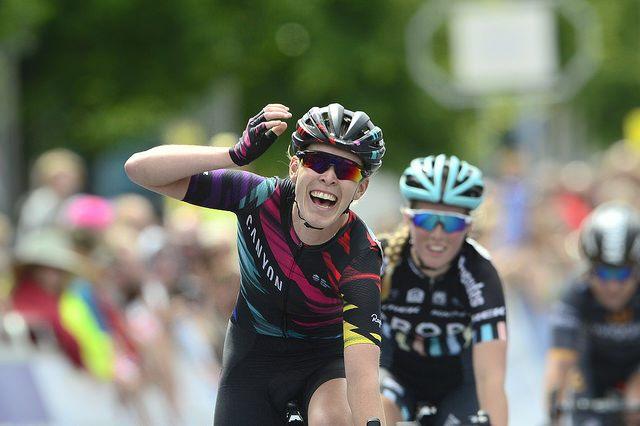 Some of the biggest names in cycling will be heading to the Isle of Man this June for the HSBC UK National Road Race Championships – but road.cc has learnt that some riders from domestic teams with limited budgets, or who might have considered entering as individuals, face missing the event due to the financial and logistical costs involved.

British Cycling confirmed last month that the island in the Irish Sea, the birthplace of former men’s national road champions Mark Cavendish of Dimension Data and Team Sky’s Peter Kennaugh, would be hosting this year’s event.

The men’s and women’s time trials, where Movistar’s Alex Dowsett and Team WNT Pro Cycling’s Hayley Simmonds will each be looking for a third successive title, take place on Thursday 22 June.

But the owner of one women’s team told us that due to the costs involved, they would be compelled to enter fewer riders than at last year’s event, which was held in Stockton-on-Tees.

He told road.cc that the expense of getting six riders, a sports director and a mechanic to the Isle of Man – “upwards of £1,000” once travel, accommodation and food were factored in – had forced the team to miss the round of last year’s National Series held on the island.

“We’re not a rich team, our sponsorship only runs so far and the riders already contribute a fair amount in race entries,” he continued.

“For that price we can go and do a couple of weekends in Belgium or Holland. The organiser of the race contacted me offered a 'deal' he'd got on ferries, which was a whole £1 cheaper than the best price I'd managed to get, so we politely declined.

“We'll go to ride the Nationals this year because it's the Nationals, but we are likely to take a small team, which will be a shame.

“If it was another event we wouldn't bother. It's a shame as the Isle of Man is a great place to ride a bike and race, but unless the organiser can help towards costs I fear some teams may be thinking twice.”

The company Isle of Man Steam Packet operates ferries to the island’s capital, Douglas, from three ports in northwest England – Liverpool, Birkenhead, and Heysham. Depending on the route, sailing time is between 2 hours 45 minutes and 4 hours 15 minutes.

Currently, the cheapest crossing to go out on Wednesday 21 June, the eve of the time trials, and return after the road race on the evening of Sunday 25 June, is £322.30 for an estate car typical of those used by a cycling team, with a driver and three adult passengers, and carrying bikes on the roof rack.

A search on Booking.com to stay in Douglas during those dates – four nights – reveals that many hotels and guest houses are almost sold out. Several have just one double or twin room left and much of the accommodation that does remain is not cheap.

It does seem that the problems associated with getting to the Isle of Man and securing accommodation will have more of an impact on the women's races rather than the men's, unsurprising given the disparity in finances between teams on each side of the gender divide.

Sian Botteley, a 20-year-old rider who finished 51st in last year’s women’s road race in Stockton-on-Tees, told road.cc she was having “second thoughts” after learning the event would be held on the Isle of Man.

“I'd love to do the race because Nationals is always a great target to aim for but it may not be financially viable,” she said.

“Personally, if I were to go, I imagine I would have to fund the trip mostly myself. My team for this season, Cycle Team OnForm, is a new set-up with a relatively low budget compared to the bigger more established teams.

“Also, in order to pursue cycling fully I only currently have a small part-time job and therefore would struggle to afford it myself, and while my parents are always fully behind me with cycling, I certainly wouldn't ask them to fund such a potentially expensive trip.”

She cotinued: “Nothing is booked yet as the decision as to whether or not I'll go hasn't been made, and probably won't be made until I'm a little way into the season and have a better idea of where I stand with regard to the performance I'd be able to produce in the race.

The event represents a rare opportunity for domestic riders to pit themselves against some of the top names in the sport, as Botteley explained.

“Being still a young rider at 20 years old, it's hugely valuable racing against some of the best riders in the world and often the national championships is the only opportunity throughout the year that riders of my level get to compare themselves against those girls.

“It's a big thing being able to race shoulder to shoulder with riders that you idolise and it's fantastic for your self-confidence if you can raise your game on a bigger stage.”

She added: “Many younger riders will be on smaller teams with lower budgets so there will definitely be a big chunk of them missing out.

“Racing the national championships as a young, relatively inexperienced rider can be a huge baptism of fire, but also a massive learning curve that you take so much away from.”

We are aware of other riders who have already decided they won’t be entering the event, or who are still undecided about it. One rider, who has ridden the National Championships before, said she was “gutted” at the prospect of missing this year’s event, adding that she is having trouble justifying the cost as well as the three days off work it would entail.

There’s little doubt that given the setting, the Isle of Man will provide a spectacular backdrop to the National Championships, and should make for some exciting racing.

But at a time when British Cycling is under scrutiny as never before, have they scored an own-goal in having them hosted somewhere that deters many from entering in the first place?

We have asked the governing body for a comment.