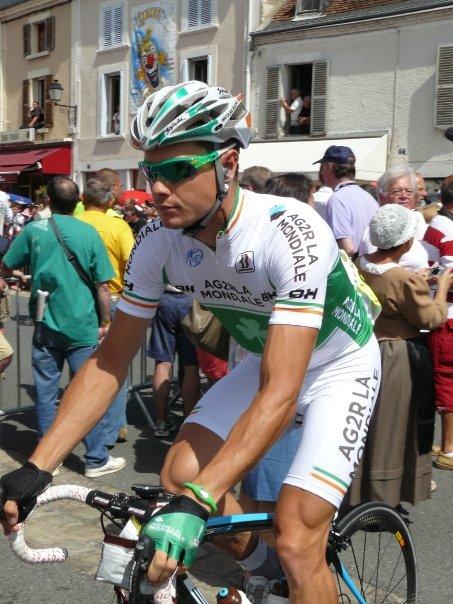 Nicholas Roche admits to some fear, but is ready to follow in his father's footsteps...
by Martin Thomas

The Ag2r-La Mondiale team has set its lead rider Nicholas Roche the target of a top ten position in the Vuelta following his fifteenth place in last month’s Tour de France.

Roche feels he’s now ready to become a Grand Tour GC contender, like his father Stephen. The 27 year-old first rode the Vuelta in 2008 and came thirteenth overall and second in stage 18 to Las Rozas.

He said, “The 2008 Vuelta is where everything started for me. Since then, I’ve improved every year. After my first Tour de France in 2009 [in which he came 22nd], I set the top ten as a goal for myself this year. I made it without profiting from any breakaway in a flat stage and I could have done even better without a flat tyre in the Port de Balès.”

That day, Roche didn’t hide his ill feeling towards teammate John Gadret, who didn’t assist him. He said, “Because of that, I lost two positions on GC and I was really angry. I won’t hate him for ever though. We both have another two years contract with the same team. For the good of all of us, we have to forget this incident.”

Gadret took part in the Giro d’Italia this year and won’t line up at the Vuelta. Roche said, “My lieutenants will be Chrisophe Riblon – who won stage 14 of the Tour de France from Revel to Ax-3 Domaines – Rinaldo Nocentini and José Luis Arrieta. The advice and the hard work of Sébastien Hinault and Ludovic Turpin will be fundamental. We also have young riders like Blel Kadri and Guillaume Bonnafond who are very good. My goal is to make the top ten and I’ll quickly find out whether or not I can make it. On day three, there is the first category climb Puerto de Leon. It’ll be a test.”

Roche admits to be afraid of riding two Grand Tours in the same year for the first time. He said, “I finished the Tour de France in very good shape. One week later, I finished eighth at the Clasica San Sebastian. Since I’ve been taking a rest, I’ve felt very tired. The Vuelta starts just one month after the end of the Tour de France.

"I hope my break will prove to be a good decision. That’s why I think I’ll have the answer I’m looking for in Malaga. If I lose five minutes on that day, I’ll change my goal and target a stage win instead. To make the top would be a great achievement considering the quality of the field. I don’t go to the Vuelta to prepare for the world championship but for improving my overall position of two years ago.”

His father Stephen won the Giro and the Tour, both in 1987, but rode the Vuelta only once towards the end of his career. He came fourteenth in 1992.