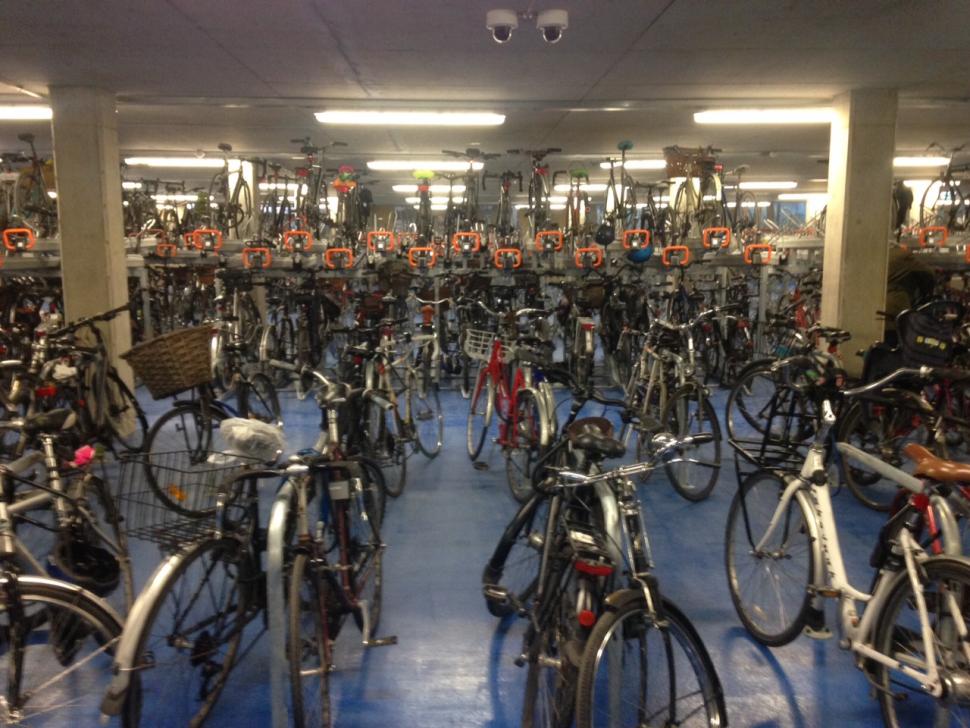 Cambridge has been named Station of the Year at the National Cycle-Rail Awards following the opening earlier this year of its new CyclePoint, which has parking spaces for nearly 3,000 bicycles.

Organised by the Rail Delivery Group and hosted by the All Party Parliamentary Cycling Group at Westminster Central Hall in London last month, the awards are now in their 12th year and saw businesses and train operating companies from across Britain recognised in 10 categories.

Those included Best Customer Service, won by East Midlands Trains for its initiative called A Customer’s Experience, with the company also winning the Operator of the Year award.

Awarding Abellio Greater Anglia the Station of the Year prize, the judging panel said that CyclePoint made Cambridge “the flagship station for UK cycle-rail at this period of time and our first entry into the scale of facilities seen in Northern Europe ... It speaks for itself and Greater Anglia should be proud of what they have achieved.”

The Dutch-owned operator hopes the facility will encourage more people to follow the continental practice of having a bike at both ends of their rail journey, and with 2,850 spaces, it is by far the biggest cycle parking facility in the UK – and has more cycle parking capacity than London's eight busiest mainline stations combined, as well as being a significantly greater provision than is found in any of the other seven English cities to benefit from Cycle City Ambition funding.

Greater Anglia managing director Jamie Burles commented: "We're delighted to have received this national award for Cambridge CyclePoint. It is a ground-breaking project that sets a new standard for cycle parking at rail stations in the UK.”

Describing it as “a world-class facility – fitting cycle complex for the UK's most cycle-friendly city,” he added that the company will “continue to improve cycle-rail facilities across our network over the course of our new franchise."

Virgin Trains was highly commended for its Preston Cycle Hub, which provides secure parking for up to 200 bikes and was built following a spate of thefts of bikes at the Lancashire station.

The Best Customer Service award for East Midland Trains reflected efforts to improve the experience of passengers who use a bike for part of their journey, with the operator now having seven cycle hubs across its network.

It also introduced a Train Triathlon Challenge for Cycle to Work Day that encouraged people to cycle to their local station take the train then complete their journey to their workplace by foot.

East Midlands Trains’ attention to customer service was also noted by the judges as they awarded it the title of Operator of the Year, saying the company “are taking a lot of care over getting the details right. We loved the triathlon idea, and the way they are working hard to engage with their own staff. They offer a good mixture of the practical (bike health checks) and the creative.”

Innovation of the year went to Great Western Railway and Oxford-based Bainton Bikes, which developed an app for the train operator that enables people to hire a bike at a station using just their mobile phone, and doing away with the need for dedicated stands for hire bikes.

Launched in June, the scheme has proved popular in Oxford and is set to be replicated at other stations of the network, with the judges saying: “This is actually a fun scheme! In a world of tightened budgets, particularly in the rail industry, it’s good to see that this was delivered with no financing requirement on the train operator. Nice work!”

Other award winners included Sustrans Scotland in Partnership Working and Local Government Schemes for its links to Borders Rail work and the cycle facilities at Haymarket Station in Edinburgh, and Transport for West Midlands in the Security category for its Cycle Crime Action Plan.

Both awards specifically referenced the borough’s Cycle Hubs, now used by 550 people daily. The judges said: “We’re really impressed with the look and design of the hubs ...bright, clean, modern, high quality, and, most importantly, appealing. They are the kind of infrastructure that makes you want to cycle to the station.”

Sarah Deakin of the Kent Community Rail Partnership was named Cycle Champion, for work with schools including delivering the Smarter Journeys project to Year 5/6 pupils, as well as helping children with special needs learn how to ride a bike.

This year’s Cycle-Rail Photography Competition winner was Steve Smith, whose picture entitled A day out in Winchester depicted a pair of youngsters at the city’s Cycle Hub and was described as “Am lovely photograph, full of fun and excitement.”

You can download the awards brochure, which gives full details of the winning projects, here.