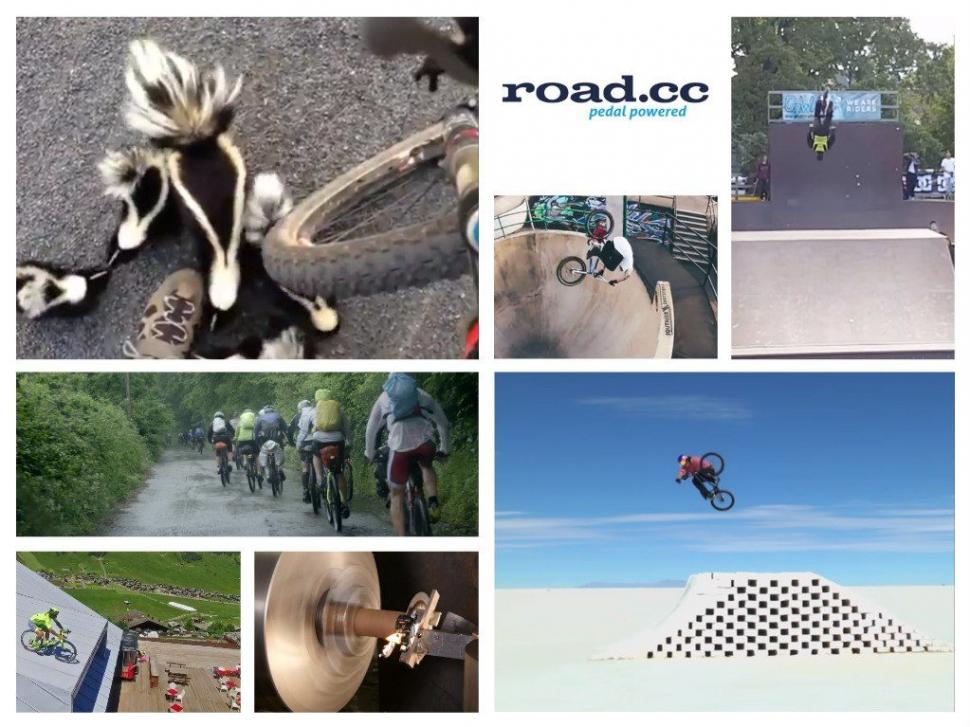 The video round-up's stocked full of tricks and wanderlust + answers to questions like 'how much punishment can disc brakes take?'...
by Elliot Johnston

We've all had moments on our bike that we wish we'd caught on camera; perhaps an incident that no one believed had actually happened. The lead video in today's video round-up is exactly one of those moments. Fortunately we've got the skunky goodness in its adorable entirety for you!

Following the skunks we've got a selection of tricky vids that should satiate your Friday afternoon itch to throw away your work and get out on your bike. Or it'll make that itch worse. Don't get fired.

We then move on to some fantastic cycling adventure videos that'll probably stir a desire inside you to throw away your work and get out on your bike. Again, don't get fired.

Once we've safely maneuvered the temptation to get half of you fired we explore just how much punishment disc brakes can take - courtesy of a large lathe rotating at 800rpm.

As far as adorable interactions between cyclists and animals go, they don't get much more adorable than this.

This meeting went down in France, and cyclist Francois Arsenault allegedly called it "rather special." We can't help but agree.

Our good old friend Vittorio Brumotti's back with the guys from Tinkoff to do a bit more showing off.

This selection of tricks comes straight from the Alpen Village Hotel Livigno, and the rest of the Tinkoff guys look like they want in on the action.

Maverick BMXer (do they come in any other variety) and self-branded business man Mark Webb returns with his third BMX compilation video - The Webbie Show 3 - which he says he wanted to be "100% about the riding."

BMXing in a salt desert

Where Mr Webb wrote in the caption for The Webbie Show 3 that he didn't want to focus on locations and flashy shots, Red Bull's high altitude Bolivian salt desert shoot does the opposite.

That's not to take away from the riding, which is also spectacular; just the location is also absolutely stunning.

The team built their own BMX park in the moddle of nowhere - we can't help but wonder what the next person to walk by this spot will think.

Now, we'd love to believe this really is how Estonian BMX show security guards deal with problems, but we've been fooled before and we're leaning cautiously on the side of set-up here.

It's pretty cool, though, and we imagine the crowd were stunned - at least until the penny dropped.

Cycling the Roof of the World is the caption for this documentary about the Central Asian journey from Beijing to Istanbul which reaches highs of 4600m.

This astoundingly cinematic clip has us itching for adventure.

If that adventure itch is already tingling, we might advise you to look away.

This is a documentary about Clement Stawicki and Jachim Rosenlund's journey on the Tuscany Trail in June. They were taking part in an unsupported bike adventure race that covered 560km and 11,000m of elevation.

Our final bit of adventure in today's video round-up takes us to the USA.

Baja, California is the location, and the ride takes Sean and James from Appetite 4 Adventure up to the San Pedro Martir National Park observatory - which sits at 9280 feet, from the Pacific Ocean.

Disc brake vs. a large lathe

Finally, are you kind to your disc brakes?

Do you keep them clean and do you replace the brake pads regularly enough?

We doubt you're putting them through 800 rpms worth of abuse, but after seeing the sorry state that these discs were left in we're feeling rather sorry for disc brakes everywhere.