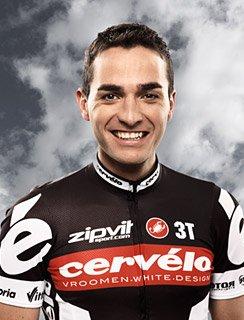 UPDATE: As the Tour de France begins in Rotterdam, Tour de France organisers ASO has confirmed that Cervélo TestTeam will start the race a man short after yesterday's withdrawal of Xavier Florencio for infringing team rules. ASO said that had the withdrawal been due to injury, the team would have been allowed to call up another rider but since the rider's exclusion was a voluntary move on the team's part, UCI commissaires have not permitted a replacement to be brought in.

With less than 24 hours before the 2010 Tour de France starts in Rotterdam, Cervélo TestTeam has announced that it has withdrawn Spanish rider Xavier Florencio from its nine-man line-up for violating team rules by using a product that includes a substance requiring clearance from its medical staff.

In a statement posted on its website this evening, the team said:

“Rider Xavier Florencio will not start for Cervélo TestTeam at the Tour de France this year. Although he was nominated for the team, the team has decided to immediately withdraw him due to a violation of internal policies.

“Consistent with the team's internal values, TestTeam riders are required to obtain permission from the team's medical staff before they can use any supplements or medication.

“This evening, the team learned that Xavier Florencio has been using a substance containing ephedrine to treat a saddle discomfort. This substance was not cleared in advance with the medical staff. This usage without clearance violates the internal policy.

“The rider is suspended from competition until the team can make a final determination based on all the facts. At this point there is no information yet on whether the rider can or will be replaced.”

There’s no question that the Spaniard has been implicated in deliberately taking a banned performance enhancing substance, but the speed with which the team has moved to remove him from its line-up underlines its public commitment to ride clean.

With the teams officially presented yesterday, and the Prologue starting tomorrow afternoon, it is not known whether UCI rules, let alone logistics, will allow the team to introduce a replacement rider at this late stage.

Happily for any road.cc users who’ve chosen Florencio for their Fantasy Tour de France game, you can substitute him out , but you’d better be quick if you want his replacement to try and earn you some points in tomorrow’s Prologue.