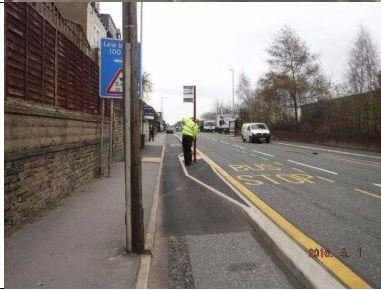 Concerns have been raised about some of the route's design features but the delivery authority hopes it will encourage more people out of their cars and onto bikes...
by Laura Laker

The Leeds-Bradford Cycle Superhighway opened on Friday, providing a dedicated, 14km cycle route – the first route of its kind to be completed outside London - between Church Bank in Bradford and Leeds City Centre.

Work began on the segregated cycle route after 2013, when the West Yorkshire Combined Authority won a bid for £21m of government funding as part of the Cycle City Ambition Fund programme.

After almost 100 consultation events and discussions with cycling groups in designing the route, it is hoped it will encourage more people to cycle. However, cycle campaigners have raised concerns about the kerb-separated cycle track which, in places, is just 75cm wide.

Cllr Keith Wakefield, Chair of the West Yorkshire Transport Committee said: “Cycling is a key element of the integrated ‘Metro-style’ transport network that West Yorkshire Combined Authority and the LEP committed to developing in the recently updated Strategic Economic Plan to support and encourage economic growth and job creation.

“People taking up cycling can expect to lose weight, reduce their levels of stress levels and experience improvements in their mental wellbeing as well as enjoying a quick and convenient way of getting around.

The route, the first of its kind outside of London, runs between two major cities in one of West Yorkshire’s most densely populated areas. CityConnect, the scheme’s delivery authority, says widespread consultation was carried out, a process it says wasn’t easy, given the strong feelings around cycling.

Cllr Wakefield called the route the “first step” in a network that will help more people to enjoy the benefits of cycling.

“By providing an environment that encourages more people to cycle, the CityConnect cycle superhighway will also help to reduce congestion and counter rising levels of air pollution, which recent data indicates that up to 700 deaths this year in Leeds alone,” he said.

What CityConnect describes as an “extensive programme” of engagement will now take place, including cycle training, led rides, Dr Bike sessions, and a Bike Friendly Business accreditation scheme to advise businesses on what they can do to encourage staff and visitors to travel by bike. They hope anyone will be able to use the route, not just committed cyclists.

Cllr Sarah Ferriby, Bradford Portfolio holder for Sport and Culture, said the route will improve the environment by offering an alternative to cars “clogging up our roads”.

She said: “In recent years we have been putting together the infrastructure to enable the take-up of cycling. This is a further major scheme, which along with our partners, we have managed to install to open up a more traffic-free route between the major commuting cities of Bradford and Leeds. We urge people to take advantage of it as far as they are able.”

Concerns were raised as parts of the CityConnect scheme was completed, on the route’s design features, including junction designs which force cyclists to give way at side roads, potentially putting them into conflict with turning vehicles, and narrow widths at bus stops. This problem Cycling UK’s Policy Director, Roger Geffen, attributed to a lack of national design standards to guide councils new to designing and building cycle infrastructure.