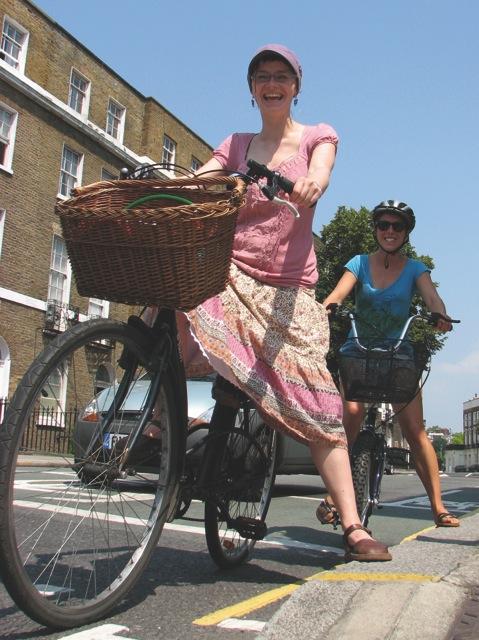 Sick of men always doing the talking about cycling? Here's a breath of fresh air...
by Sarah Barth

The Women’s Cycle Forum Scotland is to become an open membership organisation today, with the aim of giving women a new voice in cycling in Scotland.

As we reported two years ago, inspired by the US National Women’s Bicycling Forum, Suzanne Forup of the CTC and Sally Hinchcliffe of Pedal on Parliament and the Cycling Embassy of Great Britain joined forces with the Edinburgh Festival of Cycling to put on an evening of networking and debate with a panel of inspirational women speakers from across the world of cycling.

Formed out of frustration at the prevalence of ‘all male panels’ at transport events – and the continued low rates of women cycling in Scotland – the new body will now launch at the Out of the Blue Drill Hall with guest appearances from two inspiring speakers who illustrate the diversity of women who cycle today.

After organising a series of one-off events in 2014 and 2015, they decided to form a membership organisation – open to anyone who supports its aims – that could act as a voice for women in cycling, encourage more women to cycle and help develop their leadership skills.

Founder Suzanne Forup, Head of Development Scotland for Cycling UK, said, “too often when it comes to cycling, women are talked about but not listened to.

“Given how many great and active women there are involved in cycling in Scotland – campaigners, professionals, sportswomen and politicians – I was astounded to find myself at meetings where there were no women speakers at all.

“I was sick of complaining about it and decided to do something about it instead. Over the last couple of years we’ve made connections with an incredible range of women who are making a real difference for cycling and we wanted to bring them together to encourage others and make sure that we cannot be ignored.’

Co-founder Sally Hinchcliffe, organiser of Pedal on Parliament, the grass roots campaign for a cycle-friendly Scotland, said, “Jools and Lee show that there’s no such thing as a typical ‘woman cyclist’, just a huge variety of women on bikes, but policy makers still lump women and children together as ‘less confident cyclists’ while the UK Minister of Transport seems to think women don’t cycle because they’re worried about messing up their hair.

“We hope that the Women’s Cycle Forum Scotland will encourage more women onto bikes and into leadership roles, providing a means for women to speak for themselves, and make sure our different perspectives cannot be ignored.”

Lee Craigie said, “This is such an exciting time for women in our sport. We are all capable of so much more than we think we are and the recent exploits of some incredible female athletes are showing the media and sporting industry that we are just as worth listening to and invested in as men.”