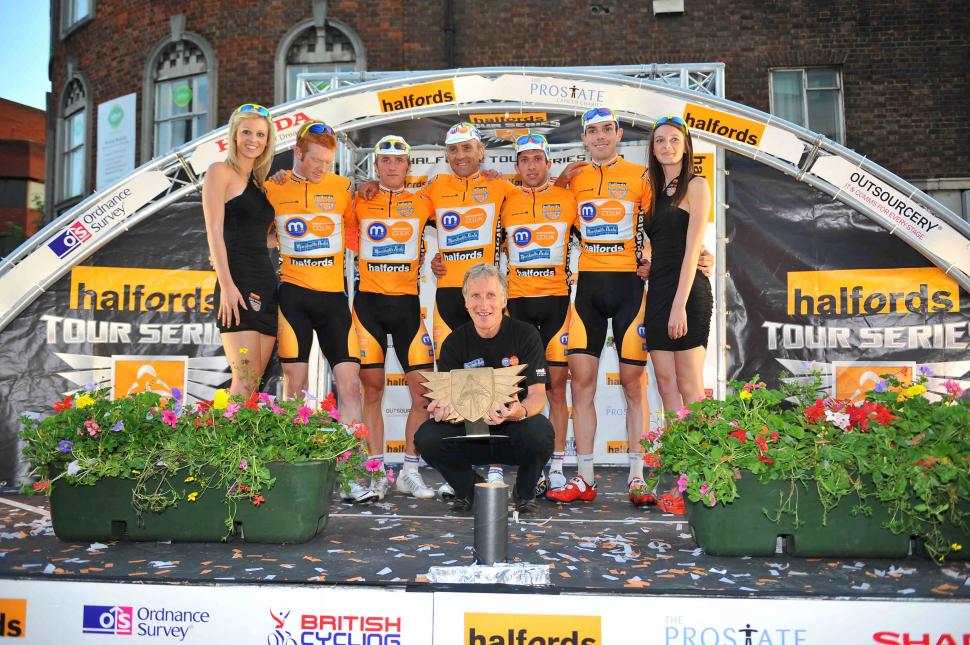 Rapha Condor Sharp ended a torrid week with a team and individual win in Woking, but the Tour Series title went to Motorpoint - Marshalls Pasta the team that has lead the series almost from start to finish.

Second place in the team competition behind Rapha was enough to take the series for the Motorpoint men by three points from Endura - this year's other dominant team. For their part Rapha could celebrate an individual and team win to help them bounce back from their big crash in Chester and the shock of Chris Newton being knocked off his bike while out on a training ride on Tuesday. The individual went to Dean Windsor, a year after his Rapha teammate Dean Downing won in the Surrey town.

Kuota road.cc also had another good night to finish what had been an injury plagued series strongly, they were fourth in the team competition and Jefte de Bruin won all three Boardman Sprints to win the the final round of the sprint competition - the overall in that went to a Rapha Condor Sharp one two of Graham Briggs and Kristian House, the pair separated by just one point.

Their crash hampered performance in the Chester round meant that Rapha went to Woking as outside contenders for the overall win, and so their only real option was to attack from the start which they duly did with Kristian House stretching his legs to move clear in the opening five minutes.  Teammate Windsor, egged on by boss Herety, and Dutchman Kuota road.cc's Jefte De Bruin attempted to bridge the gap to House, but only managed to make the junction when a group of seven other riders joined them as the race threatened to close up.

With the Motorpoint trio of Andy Tennant, Ian Bibby and Malcolm Elliott accompanying Simon Gaywood, Matt Cronshaw and Endura Racing duo Scott Thwaites and Ian Wilkinson, the original three riders now had the power to extend their lead, which topped out at around the one minute mark.

At the front of the chasing peloton Rob Hayles and Jack Bauer did a lot of work, as Endura simply couldn’t afford to let a break with three riders from the leading Motorpoint team stay away, but stay away they did, as Ed Clancy did a policing role for the Motorpoint – Marshalls Pasta team at the front of the bunch.

Coming up the gradual incline of the home straight each lap the break looked like a ten-man pursuit team as the group worked well together to keep building their advantage.  With two laps to go Windsor leapt out of the break and powered clear, building enough of a lead that he could savour his first ever Halfords Tour Series victory, and the team’s fourth individual win of the 2010 Series.

Behind Windsor, evergreen Malcolm Elliott took second, outsprinting Endura riders Wilkinson and Thwaites, before the Durham winner revealed that the predominant feeling post-race was one of relief, to have finally clinched the Series crown.

“Relieved!  It means a lot more to me than to other guys in the team as I was fully aware it was my last chance to win here.  “It was very close last year, and we were that close this year that it was really affecting sleep.  It’s a huge thing, so it’s going to take a while to sink in.”

Elliott’s team boss Phil Griffiths was also relieved as the result.  “I haven’t cried since Russ Downing left the team, so I’m not going to start now!  Between Endura, Rapha and us there was nothing in it, but we went out there and put them under pressure.  “It’s really good this year to get the wins spread around, all the sponsors are getting them, which hopefully keeps them in the sport.  So a tremendous night, tremendous.”

To see all the action from Woking, tune in to ITV4 on Friday evening at the earlier time of 5.30pm for an hour’s highlights show.