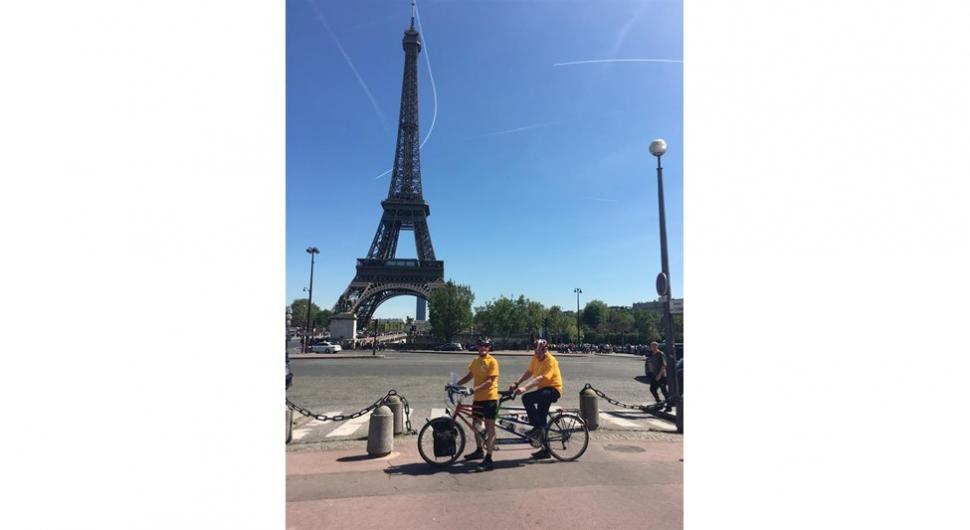 Blind cyclist celebrates 80th birthday with a ride to Paris

With a 70 year old pilot, Tommy Mulholland makes it to Eiffel Tower in just three days
by Sarah Barth

A blind man has celebrated his 80th birthday with a 160 mile cycle ride from Newhaven to Paris, with his 70 year old friend acting as pilot to his tandem.

Tommy Mulholland has so far raised over £12,000 for a children’s hospice through his ride, alongside Bob Harber, who led the way.

Tommy told the Southwark News: “If you know me, I’m a positive kind of guy. I wasn’t scared in the slightest – I had my crash helmet on after all. It was really hard work, and we were training for two months. Apart from getting a soar bottom and soar shoulders I was quite alright.”

Tommy’s granddaughters were in Paris to see his approach to the Eiffel Tower.

“I don’t think I did anything that incredible,” he said. “I just always try to keep fit and active.”

Tommy lost the sight in one eye following a robbery on his former business based in Peckham. At 47 the sight in his other eye was lost due to a blood clot sustained in the attack haemorrhaging.

He has given his intervening years to raising money for charity, and this time the money raised will be donated to the Chestnut Tree House Children’s Hospice in Worthing, Sussex.

His relative Jill Thomas wrote on JustGiving: “Tommy was attacked at a wages snatch at his company, Hygienic, and left blind in one eye. Years later at the age of 47 a blood clot caused by the injury haemorrhaged to cause him to lose his sight in the other eye.

“Tommy is such an inspiration to all of his family and friends and has achieved so much since he lost his sight. These include being an honorary member of the English and Welsh Blind Golf Association after being the Captain and raising money for them. He is a Freemason (member of 3 lodges), founder member of Bromley Lions and has raised thousands of pounds for them over the years, raises funds for the Greater London Fund for the Blind, organises an annual charity event for the ex-Boxers’ Association raising money for boxers suffering hardship and many other things.

“He was honoured with the Freedom of the City of London in November 2015.”