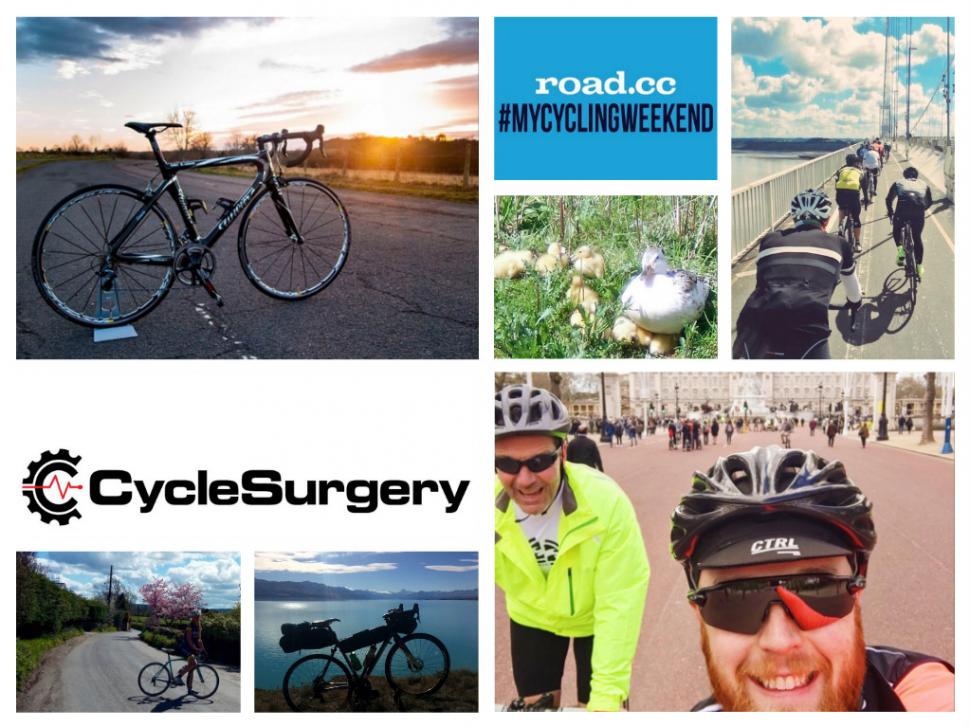 It wasn't strictly a race, but that doesn't mean there wasn't a winner - the Cycle Surgery sponsored prize is inside!...
by Elliot Johnston

The race isn't over. This #mycyclingweekend competition is, and we're ready to announce the winner of Cycle Surgery's race bundle prize below, but the race - those personal battles we're all fighting every weekend - are still going on.

You lot went out racing this weekend, and while most of you weren't actually grinding up hillsides in packs, flying over finish lines, or pumping out the miles in pelotons, you were all racing something.

Take this #mycyclingweekend Cycle Surgery prize winner: Instagram user dtm_co. He and his father spent the weekend riding, drinking beer, and racing against time to prepare for the fourth edition of the Prudential Ride London in July.

A preview of the Ride 100 finish line on the way back. #FundaySunday #mycyclingweekend #cyclesurgery – Racing to the start of Dads first cycling event, The Prudential Ride 100. Having only started cycling in January I'd say he's doing pretty well.

Congratulations to the pair of you! While it doesn't seem like you'll be racing on the streets of London in July, we hope that the nutrition bundle - which you can see below - will help you weave your way up Box Hill!

Here's to your continued training success and the thoroughly enjoyable yet never-ending race to stay fit.

A proper race bundle for the #mycyclingweekend prize!

dtm_co and his father were not the only ones racing this #mycyclingweekend, not by any stretch of the imagination.

We were sent in pictures of you guys racing across boarders and counties, racing the rising and setting sun, racing other virtual and real life riders, while finding time to stop and admire the world around you at the same time.

Here are a few of our favourites from this #mycyclingweekend, including Velo Club Walcot's escape from Wales, daveyraveygravey1's race to be fit, Anthony Bowles's duckling-interrupted race across Cheshire, Fran Hollywood's actual real life race, and roleurcoaster's virtual one:

#mycyclingweekend #cyclesurgery @roadcc pause during our race across Cheshire, above us enjoying the spring sun. pic.twitter.com/8kPofUzVyD

Some people prefer a leisurely walk on a Sunday, some others favour a bicycle race

In lots of ways we tried to find races in everyone's cycling experience this weekend, and while we largely discovered that we're all racing something, cycling itself - especially on gently sunny weekends - is often about anything but racing.

For so many of us climbing in the saddle on a Saturday afternoon is the most relaxing part of the week, a breather from the weekly rat race, a chance to reflect and recuperate.

We were sent in plenty of photos this week that reflected exactly that mindset. Here are a few:

#mycyclingweekend tomorrow me and my #Wilier hit those hills again #cycling pic.twitter.com/Mp27TGHwmy

Out for a training ride in the Surrey Hills. 3 weeks to the Fred Whitton. #mycyclingweekend pic.twitter.com/qUp8NiczLN

The weekend may be over, but your chance to join in on the #mycyclingweekend fun isn't.

If you tragically missed the #CycleSurgery competition deadline, there's not a lot we can do to console you, we may, however, use your photo in Friday's #mycyclingweeked pre-weekend piece if it stands up to the standards set by the competition this week.

Remember, to get involved all you've got to do is upload your photo to Instagram or Facebook, making sure you've got the #mycyclingweekend hashtag clearly visable.