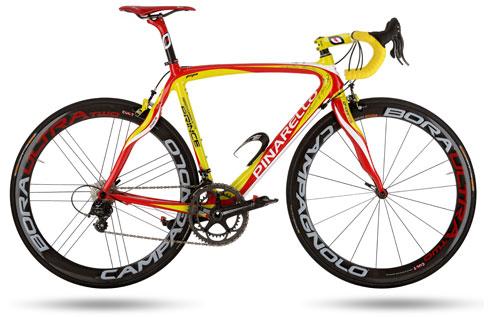 Not really - but we know just the man to slip him the P45 if Caisse d'Epargne decide to sack him...
by Simon_MacMichael

Yesterday, we highlighted a number of celebrities’ “dream bikes” that are currently on display at the London Transport Museum, ahead of being auctioned off next week to benefit the social enterprises that made them.

As road.cc user handlebarcam pointed out in a comment to our story, if you happen to be Lord Sugar – worth a cool £92 million according to The Sunday Times Rich List 2010 – “you'd think he could afford something better than Sora, Suntour cranks, and old Look Deltas.”

Well, the fact is, he can, and as highlighted in a profile in on the Mail Online website last year, the keen cyclist’s favourite bike, costing £7,000, is built around a limited edition Pinarello Prince of Spain frame, painted in Spanish national champion colours and produced by the Italian manufacturer in honour of none other than Alejandro Valverde.

We reckon that could lead to an unmissable PR opportunity for the Caisse d’Epargne team, which Pinarello supplies, should it decide to change tack and withdraw its support for its team leader, who last month was banned until January 2012 following a decision of the Court of Arbitration for Sport.

In the event that the team’s management decide to get a hatchet man in to tell Valverde that his services are no longer required, who better than the former Sir Alan, who besides riding the same bike, divides his time between homes in Essex, Florida and Spain, and who has proved on TV’s The Apprentice that he doesn’t flinch when breaking the bad news?

The entrepreneur probably already knows how to say this in Valverde’s native tongue, but in case he doesn’t, the words he needs, as used in the series El Aprendiz, are “Estás despedido!” – “You’re fired!”