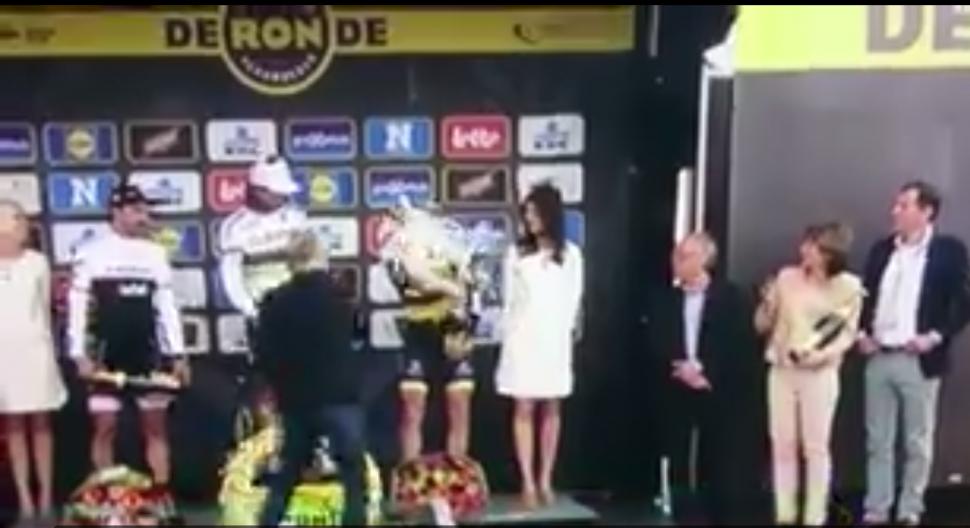 Video: Careful with that champagne, Sepp!

Sepp Vanmarcke blows his own hat off with a champagne cork, narrowly avoiding his face, and a nasty injury
by Laura Laker

Hats off to Sepp Vanmarcke, who narrowly avoided injury, not during the Tour of Flanders, but shortly afterwards, at the hands of a rogue champagne cork.

The moment the Belgian rider, of Team LottoNL – Jumbo, managed to knock his own baseball cap off on the podium yesterday was caught on camera by a bystander H Tiemeijer.

Vanmarke’s celebration of his third place in the first Monument of the year yesterday followed a thrilling end to the race, in which he and Fabian Cancellara battled for second place after Peter Sagan led a solo break to the line.

Thankfully the pressurised cork missed everyone on the podium, including Sagan and Cancellara, but corkgate could easily have gone badly wrong.

Champagne corks can exit the bottle at up to 60mph, with forces of up to 70psi. According to stats cited by Morrisons supermarket, more than 900,000 Brits injure themselves each year with champagne corks, with black eyes the most common injury (8%). One study, by the British Journal of Opthalmology, suggests 26% of those reporting to a US-based eye injury registry with unintentional injuries from pressurised drinks remained legally blind afterwards. A sobering thought.

Experts recommend not shaking the bottle before opening, and pointing it away from your face, other people’s faces, and breakables, when you do so.