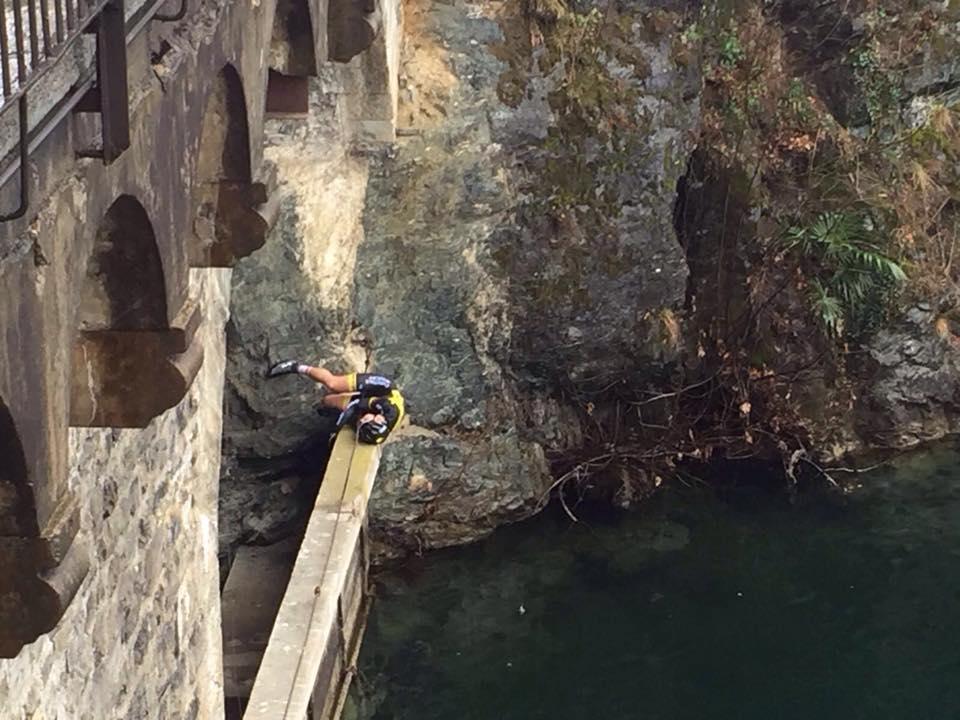 Meanwhile, BMC’s Danilo Wyss was involved in a collision with a motorbike at La Drome Classic
by Alex Bowden

A 22-year-old German pro cyclist survived a 12m fall from a bridge during the GP Lugano on Sunday. Arnold Fiek fell into Lake Lugano during the first few kilometres of the race and was forced to swim to the shore where he waited for a boat to rescue him.

The Christina Jewelry rider told Gazzetta dello Sport how it was “too slippery in a corner” and that after sliding out, he ended up being pitched over the guardrail.

Falling, he banged his hip against the wall, fracturing it, before landing in the water. He then swam for about five metres and climbed up onto a wall to wait for a rescue boat.

Fiek said he felt he had been “very, very lucky” and had feared hitting his head as he fell.

"In that first moment, when I was in the water, I thought, 'oh, it's ending' – you don't know. And then I come out of the water and I think ‘okay, it’s not so bad’. And I sat on the wall, when I was waiting, much pain, I can’t move anything.”

Fortunately, the hairline fracture to his hip and bruising were the only injuries he sustained and after 24 hours in hospital, he was discharged.

Also this weekend, BMC’s Danilo Wyss was involved in a crash with a motorbike at La Drome Classic. In the wake of the incident, team boss Jim Ochowicz has written an open letter to the UCI regarding moto collisions in the peloton.

“On September 1, 2015, less than one year ago, I wrote a similar letter after an alarming number of crashes involving vehicles had taken place in the peloton since the beginning of the 2015 season. Despite my reaching out for help at that time, the problem became even more prominent as the season went on and we watched in disbelief. Now here I am again asking the powers to be to take notice.

“This weekend we saw two serious incidents take place that involved vehicles on the race course taking down riders on live television at La Drôme Classic in France and Kuurne-Brussel-Kuurne in Belgium. Incredible! The riders deserve far more respect than what they are receiving from those who are responsible for protecting their safety. We all understand that there exists an element of danger in the sport of cycling from a number of places and conditions but no rider expects to be run down from behind by an over-enthusiastic pilot on a closed race course. Disgraceful!

“This has got to stop before the headlines in the future are of a more disturbing nature than what we have seen in 2015 and now again in 2016.

“To the UCI, I am turning to you for answers and solutions.”

Broeckx has a fractured collarbone, a fractured rib and a bruised hand and will be out of action for a number of weeks. Lotto-Soudal has filed a complaint and expressed its hopes that action will be taken.

“Lotto Soudal hopes that after the succession of events the past few months and because of what happened yesterday during Kuurne-Brussels-Kuurne the theme ‘safety’ won’t only be further discussed between organisations, teams and their interest groups, federations and the international cycling union, but that soon also concrete measures will be taken to increase the safety of the riders.”