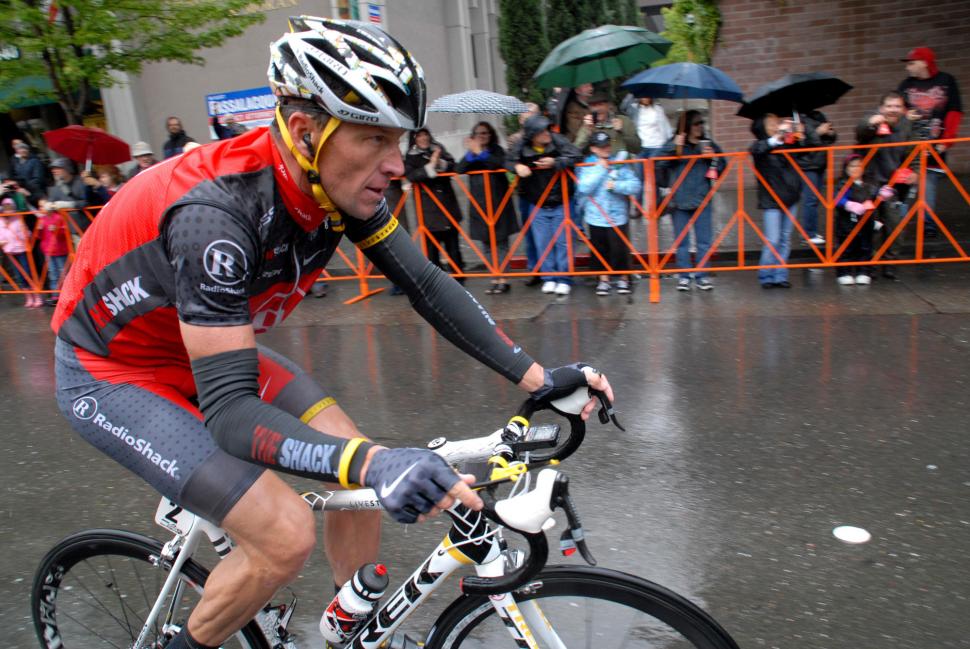 Lance Armstrong's day went from bad to worse today when after having to defend himself from the allegations of Floyd Landis before the start of today's Tour of California stage he later crashed out of the race.

The Texan was brought down by a crash in the main group a few miles into the race outside the city of Visalia, and Radio Shack spokesman Philippe Maertens said that Armstrong received stitches in his left elbow and under his left eye after he was left bloodied and battered after the fall. He will not be continuing in the race, and it's unclear whether his injuries will affect his preparations for the Tour de France. He underwent an Xray on his elbow to assess the damage, which revealed no break.

The day had, of course, begun with a media frenzy as reporters pressed Armstrong for his views on the statements by Floyd Landis that went public yesterday. As well as admitting his own doping, Landis also alleged that Armstrong, David Zabriskie and George Hincapie had systematically used performance enhancing drugs. Armstrong was backed up by Johan Bruyneel, also implicated by Landis, as he rebuffed his former USPS teammate in no uncertain terms before the start of the stage.

"He said: he has nothing, he has no proof, it's his word against ours", added Armstrong. "We like our word. We like where we stand. We like our credibility. I don't there's a lot of credibility on the other side."

UCI president Pat McQuaid was quick to distance himself from Landis' statements, adding that the only thing that it proves "is that he’s a liar. He has stood up in court and denied these things. He’s got absolutely no credibility. I’m annoyed at something like this coming out during the Tour of California." USADA, the US anti-doping agency, has said in a statement that it will be investigating the allegations, although without any new evidence it's difficult to see what they're going to be investigating.

Andy Rihs, owner of the Phonak team that employed Landis at the time of his Tour de France win in 2006, has also denied any knowledge of the rider's drug use, stating that the rider signed a code of conduct when he joined the team.

Greg Lemond, on the other hand, has unsurprisingly positioned himself on the opposite side of the argument to Armstrong. "I believe most of Floyd Landis’s statements regarding the systemic corruption in professional cycling", he writes on his blog. "I imagine from my own experiences that today he is paying a heavy price for his honesty and I support Floyd in his attempt to free himself from his past. I hope that others - fans, riders and sponsors - embrace this as an opportunity to bring about positive change in the sport."