It's been a while in coming but PRO's handlebar and stem designed in conjunction with Mark Cavendish are finally making a dash for the line and, according to Shimano, should be in the shops from the first week of June catchily branded up as the Vibe Sprint Mark Cavendish Star Series.

We first saw both the bar and stem at Eurobike last year and back then Shimano were hoping to have them in UK shops for February - Cavendish actually used the prototypes in last year's Tour de France. Since then the stem in particular, made from "unidirectional carbon in monocoque design for an ultimate rigidity and responsiveness" say Shimano has gone through a number of design changes. Cavendish himself has taken a big interest in the bars and stem bearing his name and by all accounts he is big on detail. 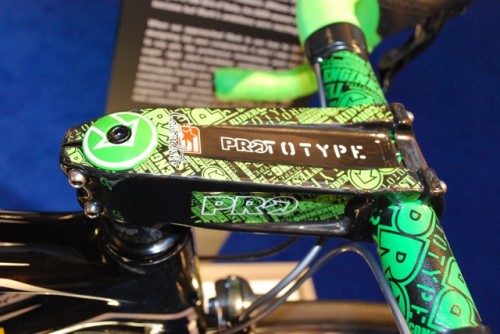 Without having the stem in our sweaty palms it certainly looks to have a more sculpted final look than the behemoth we saw at Eurobike pictured above - that in looks at least owed a lot to PRO's track stem. Mind you, appearances can be deceptive the prototype may have looked like a nightclub bouncer's cosh but it actually weighed a mere 170g… and it still does… well in the smallest 105mm length say Shimano – it also comes in 120 and 135mm lengths which come in closer to 195g.

So, what sets this stem apart from the pack apart from its beefy looks and light weight and we're guessing extreme rigidity and strength? Well, PRO reckon it's the stem's HEADLOC clamp. On this stem there is no gap at the top of the face plate between the machined alloy face plate and the stem itself which both increases vertical rigidity and decreases the stress going through the screws themselves – with a conventional stem fixing system you need to get the tension between all four screws as equal as possible or else… well, or else. Although I notice that the face plate has 6Nm advisory by every bolt hole.

No gap isn't the only trick up the HeadLoc clamp's sleeve - that slight curve to the left and right edges, inevitably called wings, by Shimano helps eliminate any chances of lateral movement. Given the forces likely to be going through any stem in the hands of the Manx Missile eliminating any chance of movement has to be a good thing. 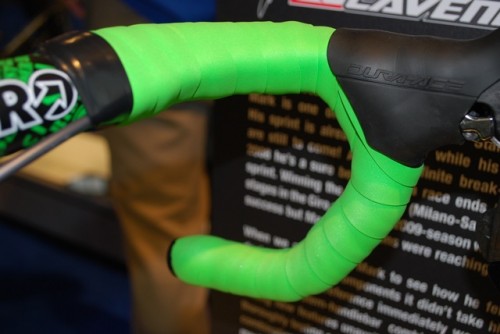 What sets the Cav branded handlebars apart, as we said back at Eurobike, is both the choice of material used – aluminium, and their fairly classic look. Both of these are apparently down to Cavendish and would again seem to prove the argument that given the choice most pros will go for simple unfussy kit that they can be sure will work – particularly after a crash. Fairly classic on the outside then but inside? Well the Vibe Sprint Bar has spline - four – running across the top section of the bars to add extra rigidity. The bars will be available in a choice of three sizes 40, 42, and 44cm and claimed weight is from 295g.

Oh yes, and the other interesting thing about Cav's bars is that at £74.99 they are half the price of the stem which has an SRP of £149.99 both are sold separately and both are designed to work with other bar or stem combinations.