Canyon has launched a brand new Speedmax CF SLX, and Jan Frodeno went and won the Ironman World Championships in Hawaii on the new bike at the weekend. Not a bad debut at all.

The current Speedmax was first unveiled in 2012, and road.cc reviewed it earlier this year. The new Speedmax CF SLX is an evolution of the previous version with a focus on improved integration, particularly changes to make it even more suitable for longer distance triathlon and Ironman events. It’s still UCI legal, provided you remove the additional hydration and bento boxes the bike is pictured with here. The new bike is based on the previous Speedmax we reviewed recently but takes integration to another level. A ‘system complete’ mantra has been the overriding design brief of the new bike, and all the typical accessories that are added to time trial bikes for the longer distances involved in Ironman events have been seamlessly built into the frame. 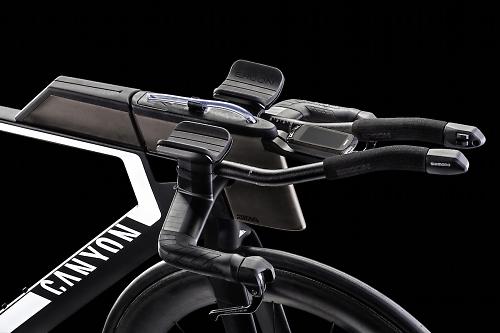 For triathletes and Ironman competitors, that means an updated carbon fibre frame now has dedicated Gear Box storage unit for spare inner tubes and Co2 cartridges in front of the seat post, and a nutrition storage box (often called a bento box) behind the stem for stashing energy gels, bars and hydration tablets. Two water bottles can be carried behind the saddle with a removable adapter.

The modified handlebar setup has a Hydration Source, developed with Profile Design, sandwiched between the extension bars and in front of the stem, with a short hose allowing easy hydration on the move. A Garmin mount has been integrated into the front of the Hydration Source unit. Canyon has sought to improve the ergonomics of the handlebars as well. A Canyon H26 carbon fibre base bar is fitted with Ergon base bar grips and the extension bars are fitted with new Ergon elbow supports. New Ergon extension grip tape to provide more road vibration damping and better grip. The Speedmax’s integrated brakes have been overhauled. The front brake is now positioned at the front of the fork (it’s behind the fork on the regular Speedmax), and the actual caliper has been developed in collaboration with TRP. Canyon says this change has resulted in a stiffer braking platform and feel has been improved. A cover maintains aerodynamics and protects the brake. The rear brake is still located underneath the chainstays. The ride and handling of the previous Speedmax impressed, but Canyon reckons it has improved the high-speed stability by modifying the steering angle. The new bike also has increased adjustment in the seat and cockpit areas so a more compact position can be achieved if desired.

The new Speedmax CF SLX should be available in December but pricing hasn’t been confirmed yet. The company hasn't released any aerodynamic data for the UCI legal version of the Speedmax just yet.