Canyon are launching a new time trial/triathlon bike for 2013 called the Speedmax CF Evo which they say is faster, lighter and stiffer than their current design with exceptional stability and adjustability. A 10-person team has been working on the new design that we first reported on from last year's Eurobike show. It will go on sale later in the year with prices starting at approximately €4,000 and it has already made an impact in the pro peloton with Team Katusha riding them to an unexpected second place in the Giro TTT lat week - a result that played a big part in propelling Joaquin Rodriguez into the Maglia Rosa.

Airfoils
Canyon already have a Speedmax in the range but the new version is made with extensive use of what they're calling a Trident tube profile to minimise drag even at low speeds. The Trident profiles vary a little around the bike but they all come with a curved leading edge that then morphs into an angular, chopped-off tail. Canyon use this shape on the fork legs, down tube, seat tube, seat post and seat stays – so most of the frameset’s vertical elements. 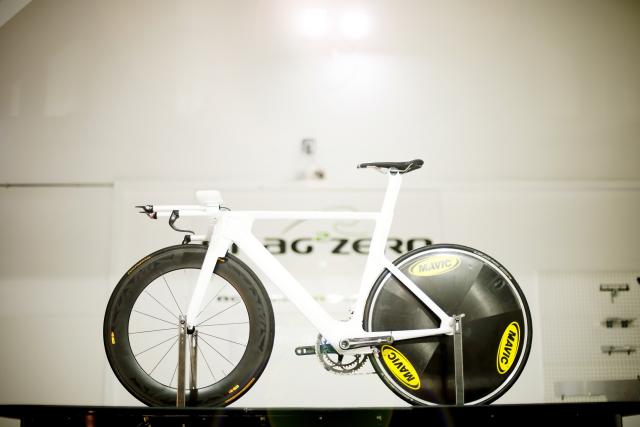 Canyon developed the Trident profile using computational fluid dynamics (CFD) on the computer and then refined it through work in the Mercedes GP wind tunnel at Silverstone with aero specialists Drag 2 Zero. Simon Smart of Drag 2 Zero has been involved in many significant aero designs over the past few years including Giant’s Trinity SL time trial bike and a wheel range from Enve. 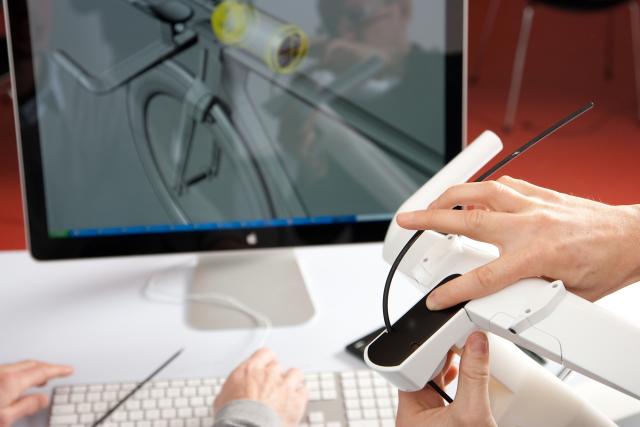 Canyon reckon the Trident design offers up to 10% less wind resistance, 20% greater stiffness and a lower level of susceptibility to cross winds than an NACA (National Advisory Committee for Aeronautics) drop-shaped profile. 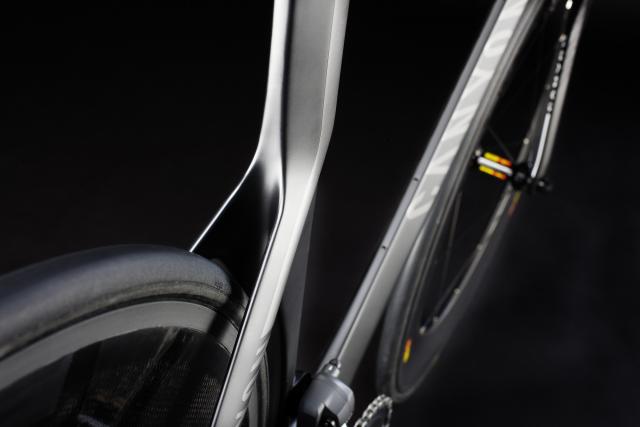 The Trident shape also has a relatively small cross sectional area when viewed from the side – so, although the tubes are deep, they’re not that deep compared to those of some TT/triathlon bikes out there. According to Canyon, that means the Speedmax is highly stable in strong crosswinds – and long chainstays (42cm compared to 39cm on the 2012 Speedmax CF) should help with stability too. Using up less energy controlling the bike in crosswinds means you can devote more to moving forwards. Plus, all other things being equal, a smaller cross sectional area also helps to keep the weight down (see below)

Integration
Canyon have put a lot of work into integrating the various bike elements to minimise drag and they reckon they’ve come up with a saving of 21 watts of power, as measured on a prototype at 50kph (31.25mph) of head-on wind in the tunnel. 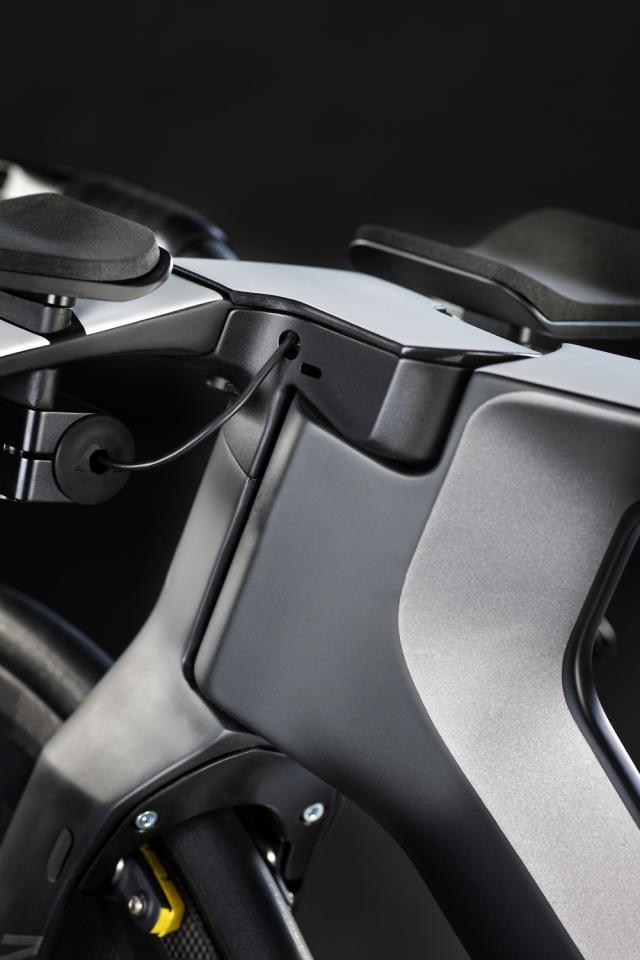 The first key element is the fork/handlebar/stem design which saves 8 watts. The fork features a strut in front of the head tube, the stem section fits on top and then flows into an aero-profile base bar. The Speedmax looks vaguely like a Giant Advanced SL up front – especially the version with the flat stem that sits flush with the top tube (other stems are available too – see below).

The gear cables head out of the rear of the aero bar extensions and then dip quick-sharp underneath the carbon stem cover and run internally from there. That means there are just 12cm of cable out there in the breeze to influence the aerodynamics. That saves another 4 watts. The Speedmax CF will be available only with Shimano’s Di2 shifting with the battery hidden inside the frame so those cables will be of the electronic variety. The brake cables run internally too. 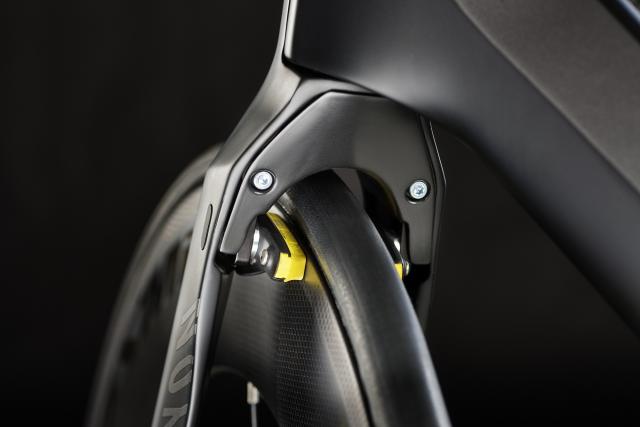 Canyon’s own centre-pull front brake – 60g lighter than a conventional rim brake, according to Canyon’s own figures – is integrated into the rear of the fork crown and gets its own little cover. That saves 5 watts, according to Canyon. The rear brake sits just behind the underside of the bottom bracket and gets its own cover too, saving another 4 watts.

Stiffness to weight
Canyon reckon that the corners of the Trident profile give the Speedmax CF Evo 15% more torsional stiffness than their existing model. The frame also comes with a lower surface area and a considerably reduced weight. The current Speedmax has a frame weight of 1,550g while the new model is just 1,280g – a 17% saving.

Geometry and fit
The 2013 Speedmax will come in three different sizes – S (53.9cm seat tube), M (56cm) and L (58.1cm)– each with 73.25/73.5° frame angles. Canyon, like Trek with their Speed Concept time trial/triathlon design, have been keen to offer plenty of adjustability. With that in mind, the seat post will come in two different versions: one is a monolink system that allows a UCI-legal saddle setback (the frame is UCI approved) and the other is a fliphead rail system that lets you move the saddle further forward to steepen the seat angle to 76.5°. That’s an option that’s likely to appeal to many triathletes. 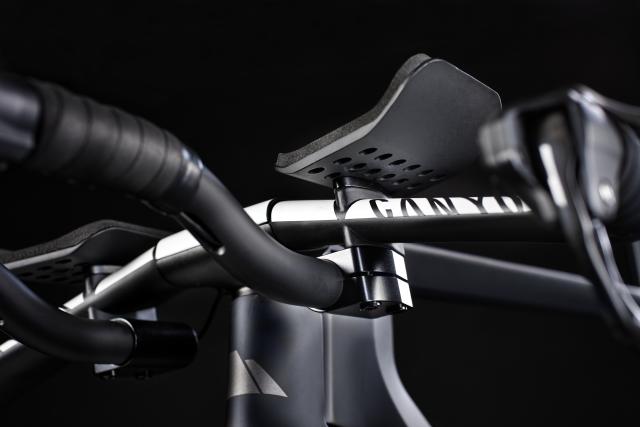 You get loads of options on the cockpit configuration – 7,560, to be precise. You can choose between a flat bar and a drop version – where the base bar angles down from the centre – and there’s a choice of different stem lengths and angles. You can also choose between straight, L-bend and S-bend bar extensions, and there’s height and width adjustability on the position at which they’re set. 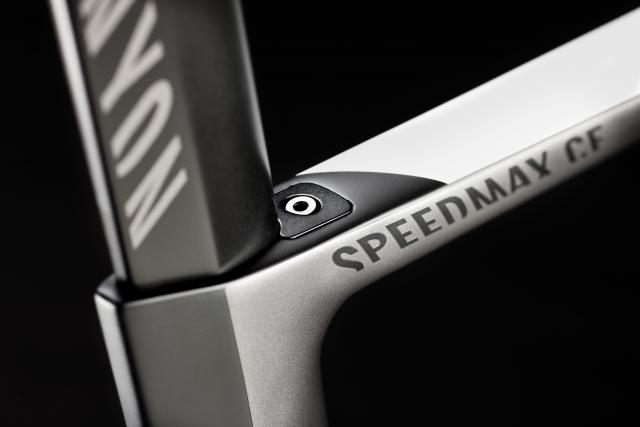 As we said up top, Canyon are hoping that the Speedmax CF Evo will be available later in the year – hopefully in October although that will depend on component deliveries. The bike will come in both Dura-Ace Di2 and Ultegra Di2 versions and with various wheelsets. The base model is likely to be priced at around €4,000 (currently £3,187) . That's a lot to pay for a bike, clearly, but it might just turn out to be a bit of a bargain considering what you're getting here - although we'll reserve judgement on that until we've ridden one.