A first look at the latest road bikes from Canyon, including the new Ultimate CF SLX and Aeroad CF SLX
by David Arthur @davearthur

Brand new 2016 road bikes are starting to roll off the production line at the moment, and German direct-sales brand Canyon has unveiled its latest range of road bikes. Here’s an overview of the new bike range.

If aerodynamics is your thing, then the Aeroad CF SLX is the bike for you. It’s the second generation Aeroad, the new version launching at the 2014 Tour de France and it’s bagged a whole load of professional road wins since then, and received a pretty good road.cc review as well. 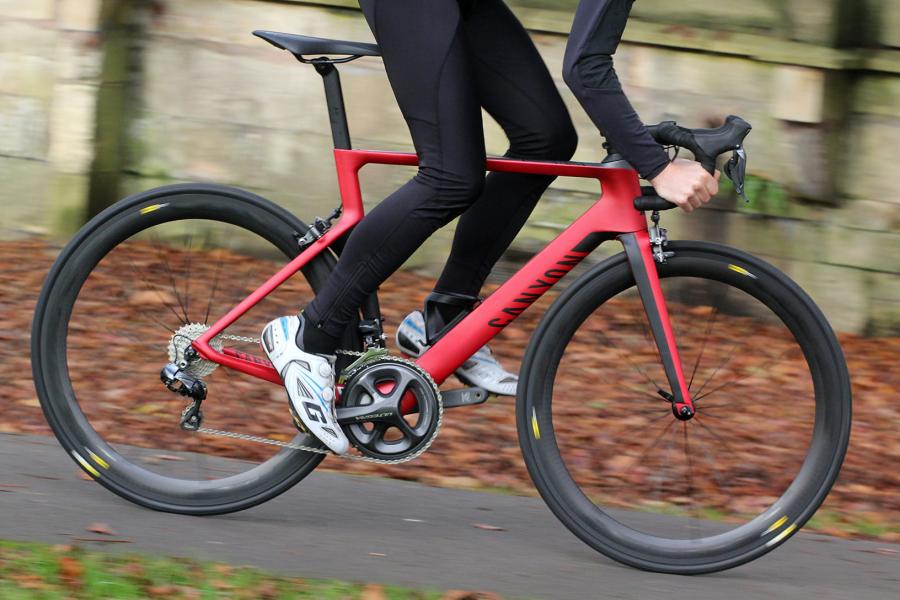 “With multiple Tour de France stage wins and Monuments like the Tour of Flanders already under its belt, the second generation Aeroad CF SLX has taken the success of the original Aeroad CF to the next level. Our innovative Trident 2.0 tube profiles cut through the air give a real world speed advantage, while the Pro Geometry provides a low and aggressive riding position for unrivalled aero efficiency,” says Canyon. 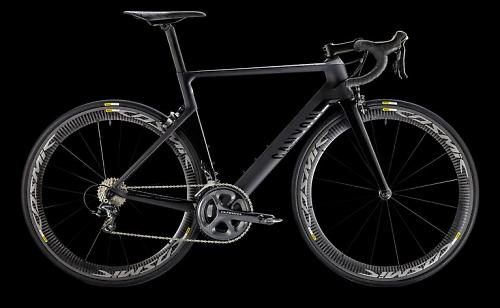 For 2016 the Aeroad CF SLX is available at seven price points from £2,699 up to £6,699. The Aeroad CF SLX 6.0 (£2,699) gets you that race winning frameset equipped with a Shimano Ultegra mechanical groupset and Mavic Cosmic Pro Carbon wheels with Mavic tyres, and a Canyon H16 Aero AL handlebar and Fizik Arione saddle. 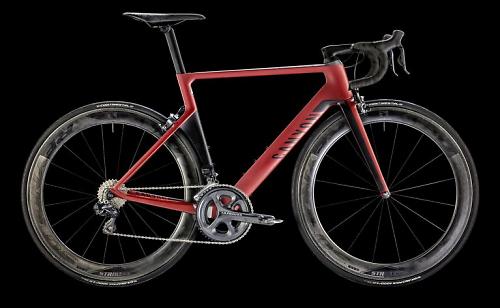 If you want an Aeroad with Shimano Di2, then the Aeroad CF SLX 8.0 Di2 (£3,499) comes with Shimano’s Ultegra Di2 drivetrain with a 52/36t chainset, and is finished with Canyon’s new H11 Aerocockpit and a Fizik Arione saddle. This is the same bike that road.cc tested when it was first launched. 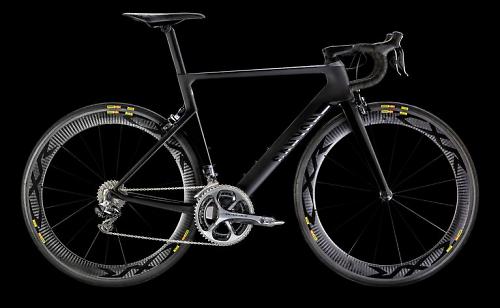 The Aeroad CF SLX 9.0 Team (£5,199) upgrade the wheels to Mavic’s CXR Ultimate 60 Clinchers with Mavic Griplink/Powerlink tyres, and Canyon’s own H11 Aerocockpit integrated handlebar and stem. The drivetrain on this bike is Shimano Dura-Ace Di2. 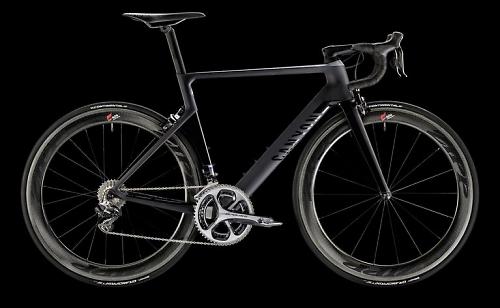 Sitting at the top of the tree is the Aeroad CF SLX 9.0 LTD (£6,699) which gets Zipp 404 Firestrike Carbon Clincher wheels with Continental Grand Prix TT tyres.

Canyon’s top-of-the-range Ultimate CF SLX has had a major revision for 2016, with an updated frame incorporating some aerodynamic features. There’s a new tubeset with an aero, D-shaped, down tube and seat tube, and an integrated seatclamp, providing a promised 10% less drag. 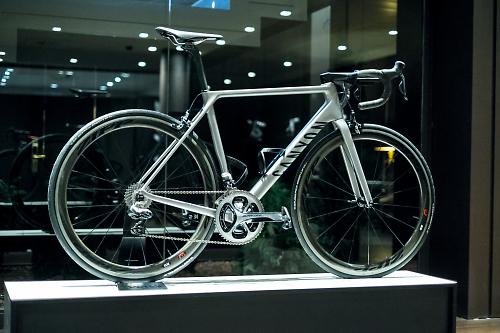 There are 11 bikes in this range, priced from £2,699 up to £5,399. There’s an Ultimate CF SLX 9.0 Team to be released soon, no price has been confirmed for that bike. Critically, the bikes share a visually identical frame across the range so you’re benefiting from that latest technology regardless of your budget. 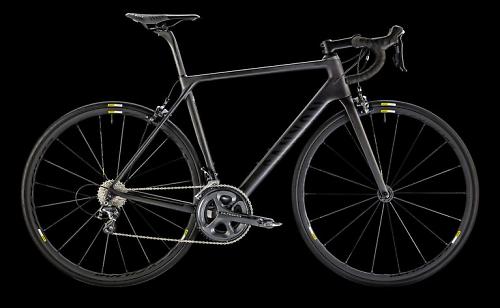 The Ultimate CF SLX 8.0 (£2,699) is the cheapest bike in the range and comes with a Shimano Ultegra 11-speed drivetrain, Mavic Ksyrium Pro wheels and a Fizik Antares saddle. 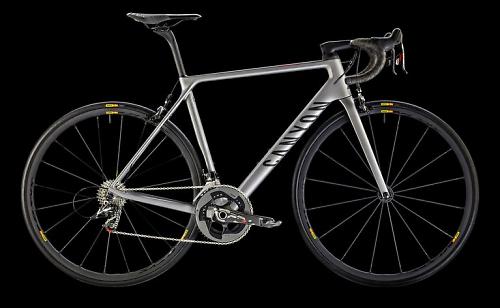 Spend a bit more and the Ultimate CF SLX 9.0 SL (£3,899) gets you a SRAM Red 22 drivetrain and Mavic R-Sys SLR wheels, with a claimed weight for the whole bike of just 6.15kg - that’s well lighter than any professional racing bike is allowed to be. 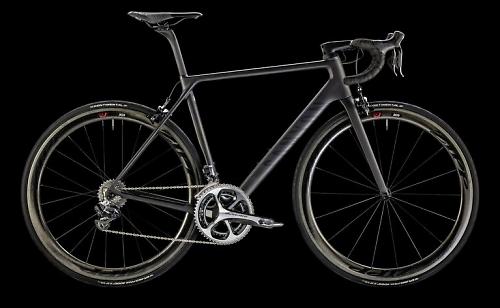 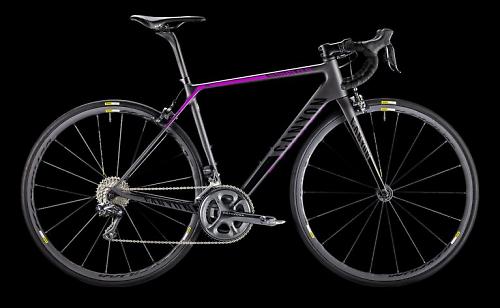 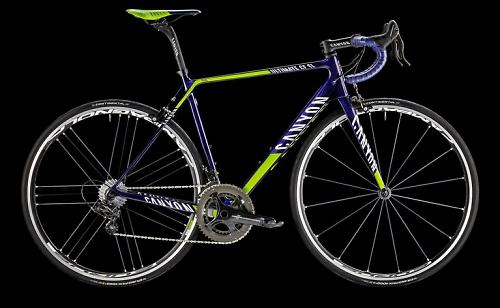 If you’re a Movistar fan then look no further than the Ultimate CF SL 9.0 Team (£2,449). Fear not if you’re not a team fan, the same bike comes in a more conservative grey and white. It’s one of the few Campagnolo builds, a Chorus 11-speed drivetrain with Campagnolo Eurus clincher wheels and Continental tyres. 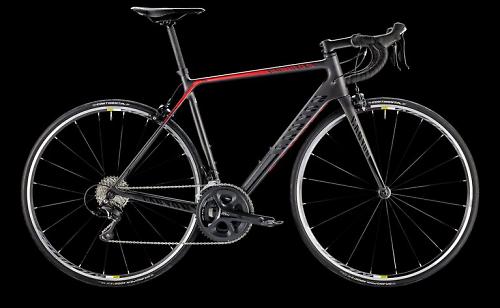 The entry-level Ultimate CF SL 7.0 (£1,349). Again, the same carbon fibre frame as used across the range but a Shimano 105 11-speed drivetrain keeps the price down, and it’s finished with Mavic Aksium wheels. Canyon claims a 7.6kg weight which is impressive for the price.

The Ultimate range is split into three sub-ranges for 2016, two carbon and one aluminium. Just three models in this range, priced from £1,399 to £2,299, but a good option if you want a light and stiff aluminium alternative, whether for racing or sportives.

The range uses a frame constructed from 6000 aluminium with a carbon fibre fork. We’re always going on about the performance of good aluminium bikes here at road.cc and it’s good to see a few options from Canyon. The latest aluminium frames offer excellent performance and you certainly get a well kitted out bike compared to a carbon rival of a similar price. 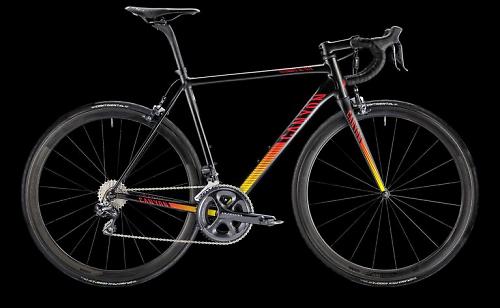 The Ultimate AL SLX 9.0 Aero (£2,299) provides a lot of kit for the money, with a Shimano Ultegra Di2 drivetrain and Reynolds Strike Carbon Clincher wheels with Mavic tyres, and a claimed bike weight of 7.4kg. It looks on paper like an ideal racing, with all the stiffness you need for charging around a criterium circuit for an hour and bags of durability. Cool paint job too. 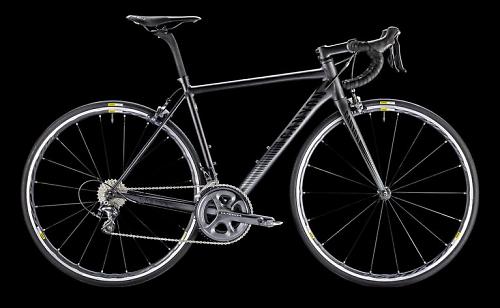 The Ultimate AL SLX 9.0 (£1,399) is the cheapest road bike in Canyon’s road range, and gets the same 6000 aluminium frame and carbon fibre fork with a complete Shimano Ultegra mechanical groupset and Mavic Ksyrium Elite wheels and tyres.

If comfort is important to you, the Endurace is built around a more relaxed geometry with a taller front end and short top tube. The bikes also come with Canyon’s VCLS split seatpost and wider rims and tyres designed to boost ride comfort.

“Armed with the same technology as our current generation of Ultimate models, the Endurace combines proven Canyon road performance with our endurance-based Sport Geometry and features designed to deliver a supple ride,” says Canyon. 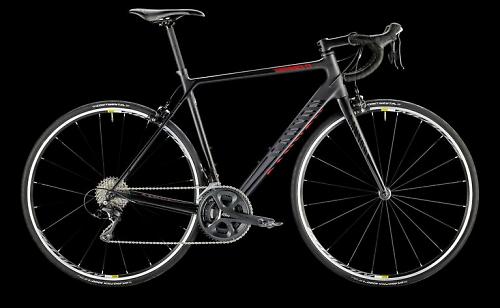 There are 10 models in this range, four of which are designed for women. The cheapest model is the Endurace CF 7.0 (£1,149) for which you get a full Shimano 105 11-speed drivetrain and Mavic Aksium wheels and Continental Grand Prix 4000S II tyres. There are seven frame sizes to choose from (XS to 3XL). 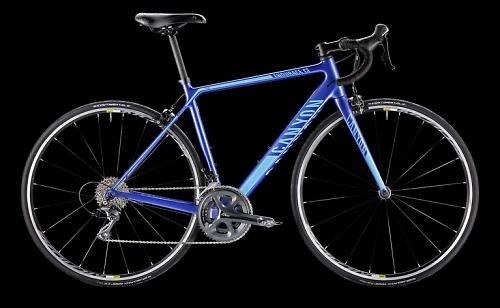 The same priced Endurace CF 7.0 WMN gets a different paint job, handlebar, stem and saddle, and it’s available in four sizes (XS to L). There are also two different frame colours to choose from. 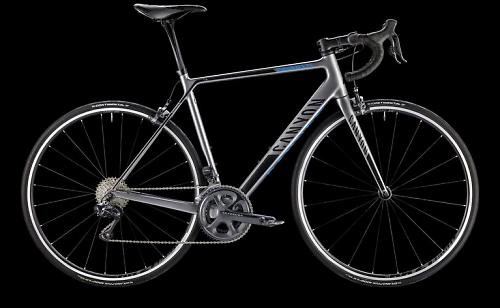 You can get an Endurace with Di2, the Endurace CF 9.0 Di2 (£2,149) comes with Ultegra Di2 and a compact chainset, with DT Swiss RR21 Dicut wheels and Conti tyres. 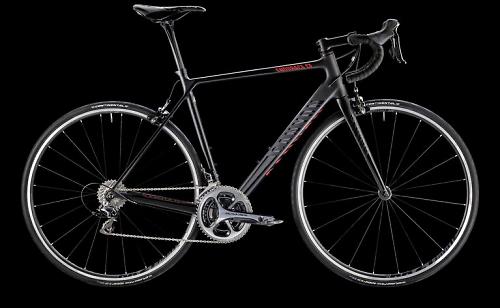 The Endurace range maxes out with the Endurace CF 9.0 SL (£2,349) which combines a Shimano Dura-Ace 11-speed mechanical groupset with DT Swiss wheels, Canyon H17 Ergo AL handlebars and a Fizik Aliante VS saddle, which weighs a claimed 6.7kg.

Providing the same Sport geometry as the carbon fibre Endurace, but with a frame made out of aluminium, this range starts at just £699. 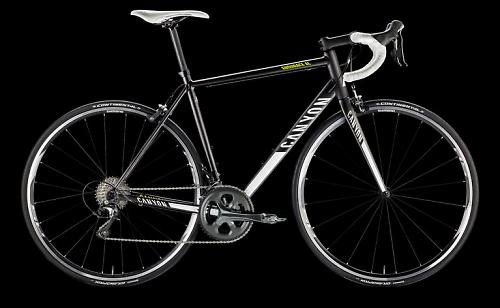 That bike, the Endurace AL 5.0 (£699) comes with the latest Shimano Tiagra drivetrain, with a compact chainset, and Shimano RS010 wheels and Continental Grand Prix tyres. 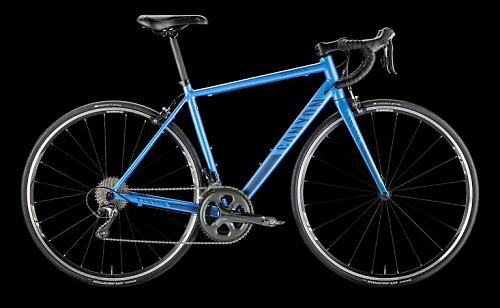 The Endurace AL 5.0 WMN is ostensibly the same bike, but is available in sizes down to XS and gets a gender-specific Selle Italia Lady Flow Special Edition saddle. 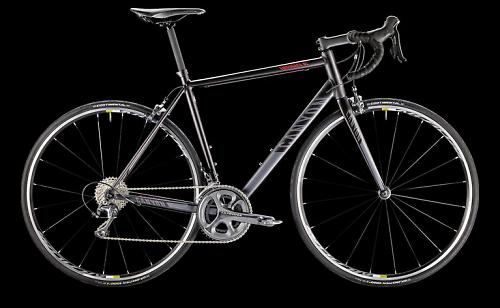 The most expensive bike in this range is the Endurace AL 7.0 (£1,049) which gets an upgrade Shimano Ultegra 11-speed mechanical drivetrain and Mavic Aksium wheels, shod with Continental Grand Prix 4000S II tyres, also upgrade compared to the cheaper models.

The Inflite range is essentially a cyclocross bike and only comes with disc brakes, there are no cantilevers to be spotted.The Inflite was launched a few years ago and represented Canyon’s first foray into the cyclocross market.

“Born to sprint through muddy fields and forests, whatever the conditions, with the Inflite there’s no reason not to get out and ride. Its robust aluminium frame borrows technology from our high-performance road models and has been optimised for disc brake use to create a versatile cyclocross bike that can handle punishment both off road and on it,” says Canyon. 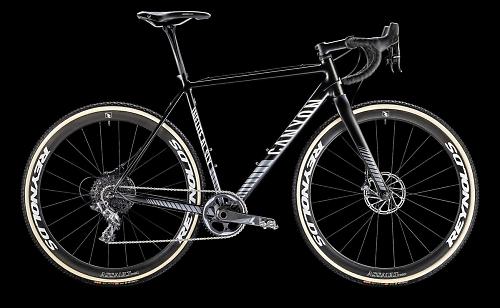 New for 2016 is the range-topping Inflite AL 9.0 SLX (£2,399) a fully fledged cyclocross race bike. The frame has been updated, new tube butting has helped reinforce the frame at key junctions without compromising the weight. It’s also single chainring-specific (there is no front mech mount) and it comes specced with SRAM’s Force CX1 drivetrain, complete with hydraulic disc brakes.

The racing intentions continue, with Reynolds Assault Disc Carbon Tubular wheels and Challenge Grifo 33 tubular tyres. It’s light too, if the claimed weight of 7.85kg is to be believed.

The Inflite AL uses the same frame from last year and is available in four builds, two cyclocross specifications and two with commuter friendly slick tyres. There are two prices, £1,099 and £1,399, which comes with a Shimano Ultegra drivetrain and DT Swiss R23 Spline wheels. 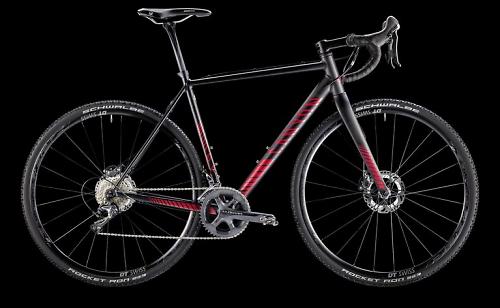 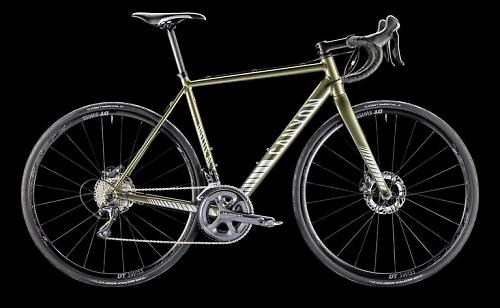 Those are changes that make it more suitable for road work, so it’s ideal as a winter training bike, or even for commuting, with some mudguards, or Audax, with a rear rack fitted. Both bikes come with Shimano hydraulic disc brakes. 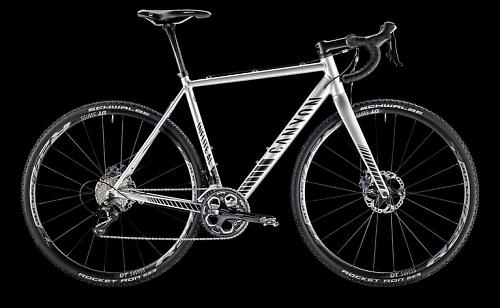 You can view the full range at https://www.canyon.com/en-gb/specials/bikes2016/

1
Nextscape launches new AlterLock lightweight anti-theft solution
2
Vincenzo Nibali victim of hilarious TV prank (+ link to video – includes a lot of Italian swearing)
3
Jail for hit-and-run drunk driver who crashed into three cyclists, causing serious injuries
4
Schoolgirl killed in bike crash 'died doing something she loved'
5
Near Miss of the Day 545: Tesco driver nearly wipes out cyclist
6
Motorists to be paid £3,000 to give up cars
7
British riders may be unable to race in Europe under new Brexit rules
8
Video shows cyclist being knocked down at roundabout