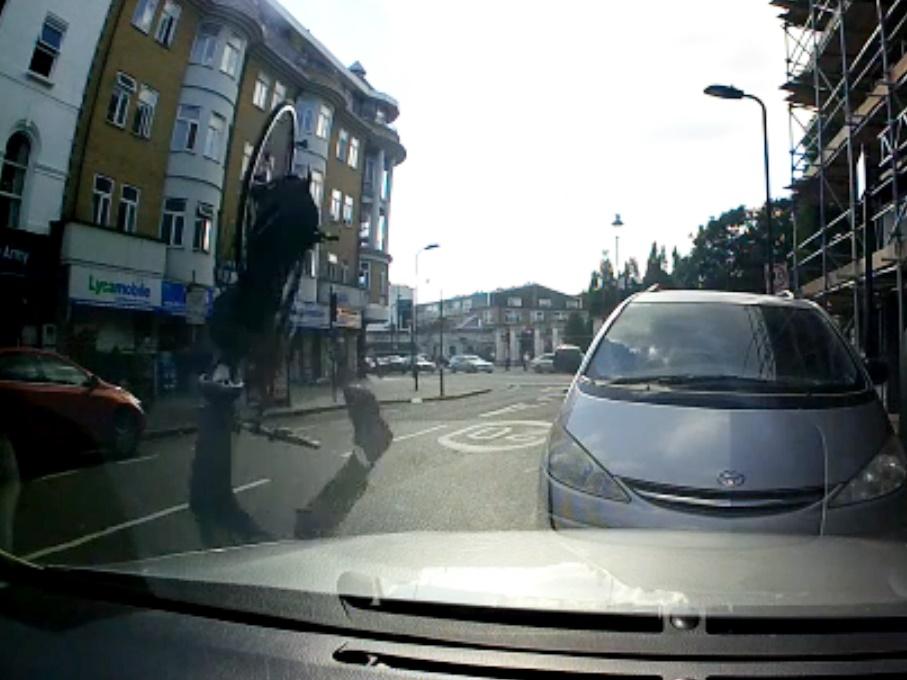 Hackney council has received over 10,000 complaints about potholes in the last two years
by Alex Bowden

The London Evening Standard has published a video of the moment when a cyclist riding through north-east London hit a pothole and somersaulted into a parked car.

The man is heading up Cazenove Road in Stamford Hill when a sudden jolt appears to jar his hands off the handlebars. Falling forwards, he goes head over heels and somehow flings the bike onto the bonnet of a parked Lexus in which the camera is placed.

Mr Filip, who captured the footage, said the cyclist was largely unharmed and in fact hurried off after the incident, saying that he was late.

“I just saw the bike flying towards me. I wasn’t sure what was going on and then I saw him pick himself up. It was shocking – he could easily have smashed into the windscreen and into my face. He didn’t need medical treatment but he had quite a bit of blood on his head and his hand. He was in a rush to get somewhere and he said he was quite late.”

Hackney council has received over 10,000 complaints about potholes in the last two years with the number reported rising from 3,970 in 2013 to 6,273 in 2014. Faulty road surfaces have resulted in 218 injuries to drivers, cyclists and pedestrians in that time with the council having to pay out over £20,000 in compensation.

CTC, the national cycling charity, recently said that delays in fixing potholes are a contributory factor in increasing numbers of cyclists being killed or seriously injured on British roads. Its FillThatHole.org.uk website allows cyclists to log problem roads and is then updated when councils or cyclists report that the defect has been fixed. In 17 areas, councils fixed only 1 in 10 problem roads while the majority (168) repaired less than half.

Peter Box, Transport Spokesman for the Local Government Association, has said that while councils fixed more potholes than ever before last year, current funding levels mean they are only able to carry out patching and filling rather than more cost-effective long-term improvements.