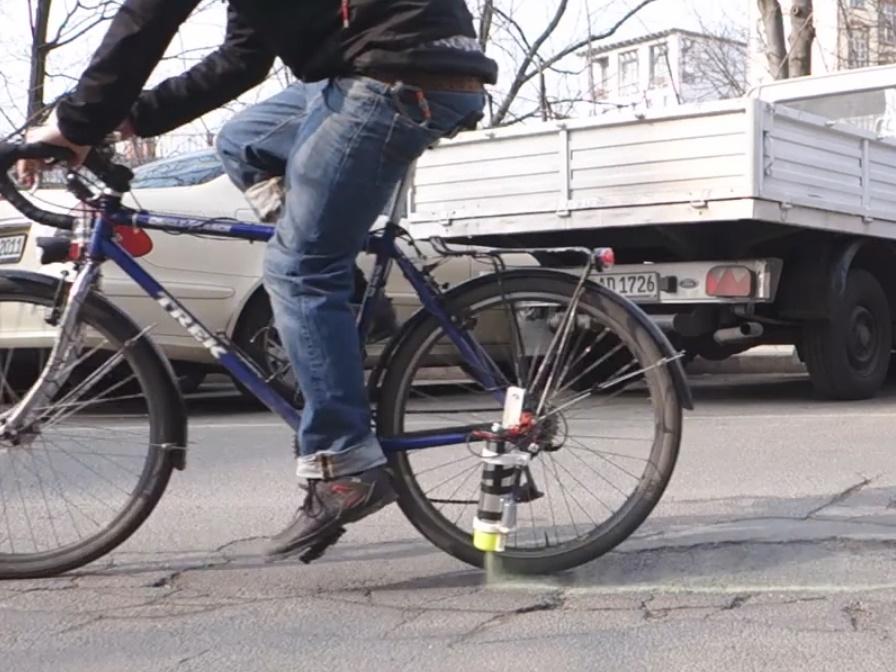 If you feel that life’s too short to complain about potholes with only a vague hope that something might be done about them, what about if you could automate the process? Fastcoexist reports on German designer Florian Born who has developed an app that automatically emails the council about any potholes you ride over.

But there’s more. He’s also developed an add-on that physically marks the location with a chalk-based paint. Take a look.

Auto-Complain from Florian Born on Vimeo.

The Auto-Complain app works with a phone's accelerometer to identify bumps in the road and you can set it to a personalised threshold, depending on what you consider to be a problem. When it detects a sufficiently large disturbance, the app logs the location and – if the spray attachment is being employed – marks the spot with a jet of paint.

At the end of your ride, the locations of the various bumps and potholes are uploaded to auto-complain.com and a PDF of the information is produced and sent to whoever is responsible for the roads.

The idea is not dissimilar to that behind a recent patent filed by Google.

"If you make it available for lots of people, you get statistics on where the most problems are and where is the highest density of bike riders facing problems," says Born. "That's a good thing for riders and the government because they don't have to manually look for potholes."

Born hopes to make the app available to the public in February, once he's finished his degree.

1
Near Miss of the Day 376: Frightening footage shows driver overtaking cyclist with coach coming the other way
2
Bike stolen from funeral after late cyclist's friends rode alongside hearse during procession
3
Business is booming! Garmin, Shimano and MIPS reveal profits boost in 2019
4
Win! Fulcrum Wind 40 DB wheels worth £1,100 up for grabs!
5
3 winners chosen! 3 sets of Altura autumn/spring cycling kit have been won.
6
Drunk driver who crashed into traffic island blamed cyclist
7
Near Miss of the Day 375: Close pass, traffic island and left-hook - all by one driver in the space of seconds
8
Zwift partners with Haute Route for three-day Watopia challenge