road.cc visited Canyon Bikes in Koblenz, a small city nestled on the banks of the River Rhine just a short drive from Cologne airport. We arrived on an unseasonably hot day to have a look around the assembly facility and offices of a brand that's growing fast in the UK. This is where it all started. Founder Roman Arnold and his brother Franc used to buy bicycle parts from Italy and sell them at races around Germany. In 1985 they started a bike parts supply company, Radsport Arnold, and in 2001 took the big step to start manufacturing bicycles. Canyon was born. Today the company has grown into a very successful bicycle manufacturer and employs 350 people.

Shunning the traditional business model of having a regional distributor supplying a network of bike shops, Canyon have embraced the internet, and DHL’s fast delivery service, to sell direct to the consumer. Selling direct like this allows them to pass on the considerable savings to the customers, a fact that hasn’t gone unnoticed by a lot of UK cyclists in recent years. This building we’re in is surprisingly small: I was expecting something vast. We’re told they’re starting to outgrow the building, which was purpose-built just a few years ago. Inside the four walls is the head office, where the designers and product managers are based, as well as a large customer support team to answer all email and phone queries from customers. With no shops to handle any problems, Canyon have to deal with all questions and concerns in this way, something they take very seriously.

That’s all upstairs. Downstairs is a slick shop open to the public with a full range of bikes, and a small selection of race bikes. There’s also a coffee bar. They do a mean espresso and the cake selection is fantastic. As is the case with nearly all bike manufacturers, the frames are made in the Far East. Canyon, however, do all the assembly here, and build bikes up to order. The frames and parts arrive at one end of the building, and complete bikes emerge out of the other end, going straight onto a DHL lorry to be delivered around Europe. When an order is placed, all the parts for the build, including the frame, fork, wheels, groupset and finishing kit, are placed on one of these trolleys. It’s then wheeled through to the first station in the process. To improve efficiency, they build the bikes in batches. Here’s a neat row of Ultimate CFX frames waiting to be built. The parts destined for this particular bike build. Around 250 bikes are built in two shifts every day, though this number varies depending on which bikes they’re building. Some, like the time trial bike, are more time intensive and take longer. 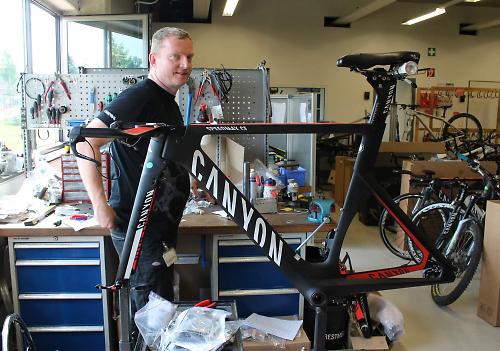 Due to the complexity of the TT bike, especially the handlebars and the cabling, one person builds the whole bike. All other bikes are passed from one station to the next, each dealing with a specific aspect of the build. It’s a very tightly managed ship. Well, it is a German company, what else would you expect? This screen shows the staff their daily and weekly targets, and the red number is how far behind they are. It’s basically a digital whip! A typical bike build can take about 45 minutes from start to completion. The CFX, however, takes about 2 hours to build, and passes through 16 stages. This series of stations that a bike passes through also allows Canyon to quality check the bikes constantly. All wheels, like this rack of Mavic hoops, are checked for spoke tension. That’s hugely labour intensive but shows that Canyon are committed to delivering quality products. 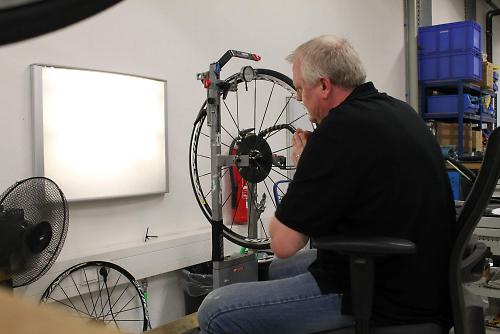 Buy a Canyon bike, and this man has probably checked the spoke tension in your wheels. This machine speeds up tyre and tube removal and refitting. Here's a CFX nearing the end of its journey. And here's a bike boxed and ready to go. Kind of. The actual boxes don't have windows, they've just prepared this one to demonstrate how neatly the bikes are packaged in their custom-designed boxes. They have to ensure the bikes arrive in perfect condition. That leads us nicely into the next department we’re toured through: the research and development laboratory. Canyon have a set of machines to test prototypes, and also to quality check production bikes. They’re clearly super keen on ensuring the product is the highest quality. Even if a product goes through a quality control in the factory in the Far East, they still like to do their own inhouse testing. Some of the rigs are set to emulate EN tests, but Canyon make sure they test above and beyond those standards. They designed their own rigs in partnership with the local university. They continue to invest and have ordered four more testing rigs which are arriving soon. A component will be put through up to 100,000 cycles. They leave it running overnight and over the weekends. They've got this remote controlled webcam so they can check in on it after hours. 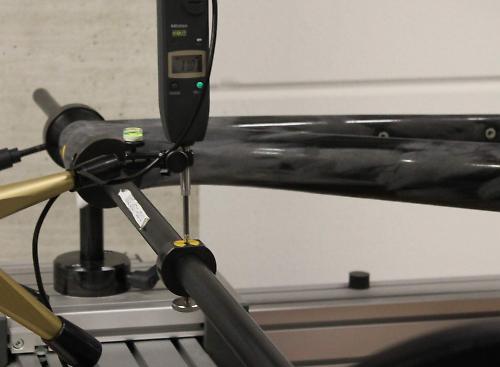 This CT scanner is an impressive bit of kit. It’s also hugely expensive at €500,000, but Canyon justify it by noting that even one recall of a product would be significantly more expensive. 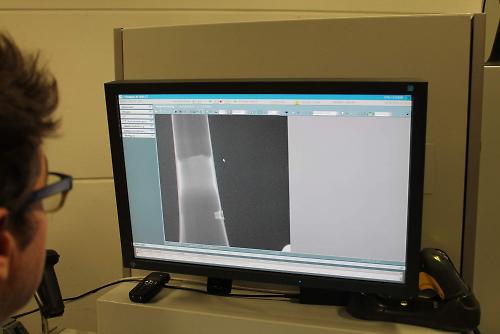 The CT Scanner allows them to inspect the internal structure of parts and frames. It’s mostly used to check production frames, but is also used in the development of new products. That's the inside of the seat tube on the screen there. You can see the joint between the two tube sections. 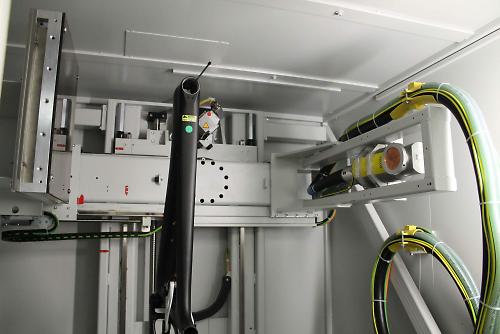 They check all their time trial bars and all forks, 150 of them a day. For frames they do random checks, about 5% of the production run, to ensure they meet their standards and there’s no defects in the carbon layup. The CT scanner allows them to check for any defective layup on the inside of the fame that would otherwise be impossible to see. They check all the team bikes as a matter of course. 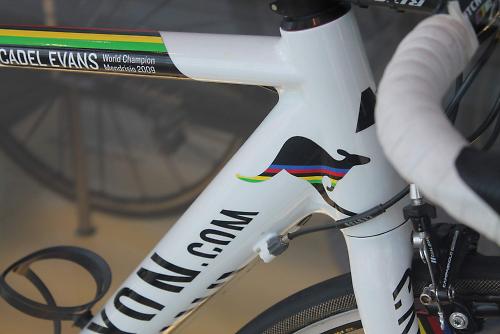 Back in the shop, there's just enough time to have a look at a collection of race bikes. As you can see, this one belonged to Cadel Evans. This one belonged to Luca Paolini. 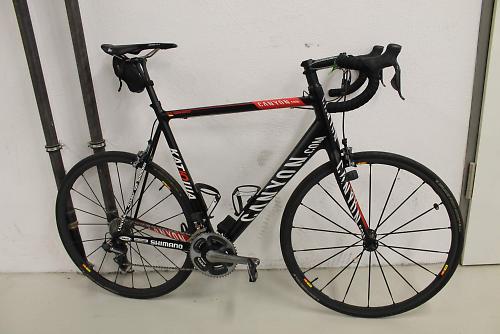 And this one belongs to founder Roman Arnold. He's a tall chap, isn't he?

Thanks to Alex at Canyon UK for arranging the trip.