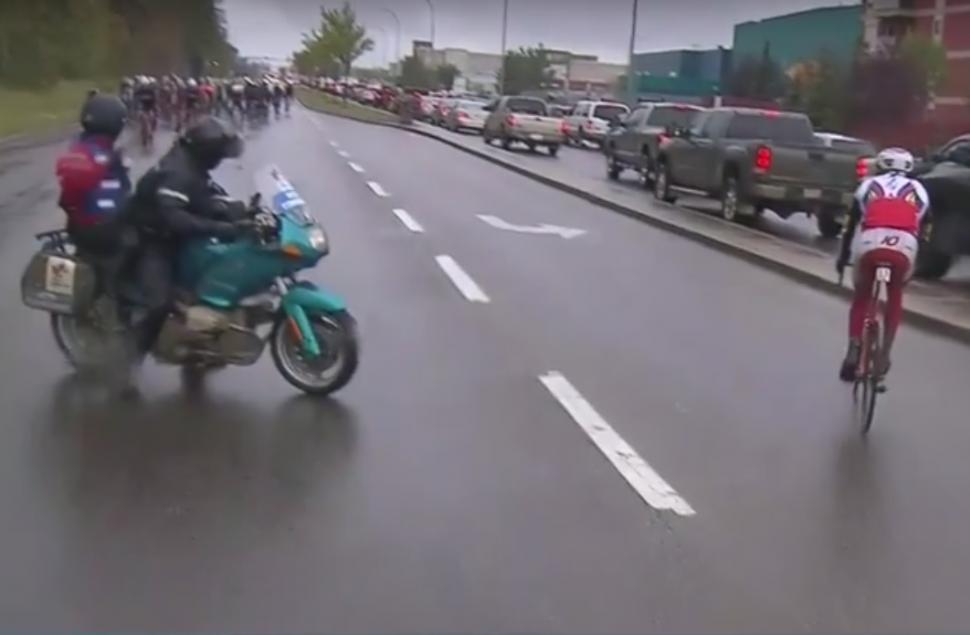 Video: Peloton forced to do a U-turn after being led the wrong way

Cannondale-Garmin’s Lasse-Norman Hansen won stage five of the Tour of Alberta in bizarre circumstances this week when the chasing peloton missed a turning. After the bunch had done a U-turn, officials neutralised the two finishing circuits and awarded Hansen the win, even though he still had 2km to go.

The Edmonton Journal reports how Sven Erik Bystrom of Team Katusha, who was chasing Hansen, missed a crucial turn despite race marshals frantically waving their arms and flags to indicate he should turn right. The peloton followed and a short while later, both Bystrom and the peloton were forced to turn around and head back the way they’d come, as you can see below.

Trek Factory Racing's Laurent Didier secured a somewhat sneaky second place. Trailing the peloton, he stayed on course and effectively overtook the entire field while they were taking their unscheduled detour.

Jeff Corbett, vice-president of technical operations for the race, explained that the stage had to be cut short because Hansen would have ended up cycling headlong into ‘the wrong way group’.

The Edson to Spruce Grove stage – at 206km, the longest of the six-day tour – also featured 21km of dirt road. Hansen explained his motivations for attacking during one of these sections.

“I went on the break on the second-last piece of gravel. That was simply because I was freezing and I wanted to go faster. I was freezing the whole way and at that point, I just thought, these guys are going too slow, I’ll never get any heat in my hands again.”

Didier’s team-mate Bauke Mollema finished in the main bunch and ultimately went on to win the overall.