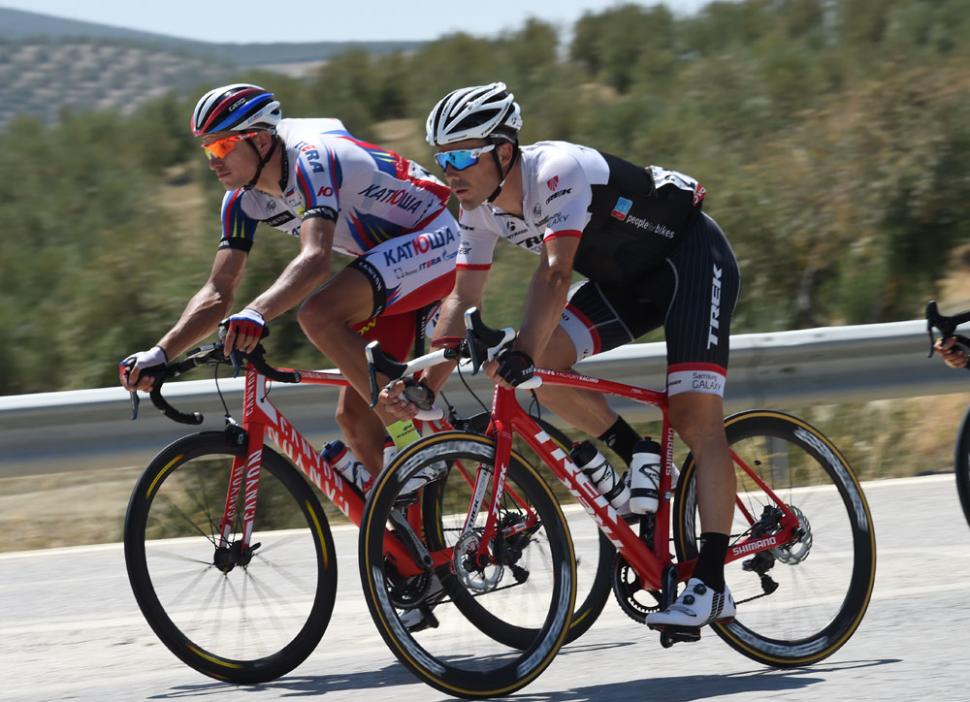 "I think that this is the future," says Markel Irizar after racing Vuelta stage on disc brakes
by David Arthur @davearthur

Disc brakes are now in the professional peloton, albeit on a trial basis. The UCI has allowed each team to test disc-equipped road bikes in selected races during August and September. We’ve seen a few already, and on stage six of the Vuelta a España, Trek Factory Racing’s Markel Irizar raced aboard a Trek Domane with Shimano hydraulic disc brakes.

It was a stage described afterwards as being a fast and hard day with a lot of undulation, up and down all the time with more climbing than had been expected. It was during these demanding conditions that Markel Irizar embarked on a disc brake trial. Trek has shared his (mostly positive) reaction to riding disc brakes.

- Disc brakes to be permitted in peloton in 2017

"Of course it’s a little more heavier and to change the wheel [in case of a puncture] is a little more difficult, but I think that this is the future,” commented Markel Irizar on riding disc brakes in a professional race for the first time.

“Many riders have been concerned about safety, like when it is really hot and if you crash it can cause damage by cutting someone or even burning. So I think for the future Shimano may have to look at covering the disc, and once we are 100 percent sure that nothing can happen, then I think everyone will use it because for sure in the rain the [braking] difference is going to be huge.

“Today in the heat already the difference was already really big  I think it’s the same when the electronic shifting came, it had a negative reaction at first, and now everybody loves it. I think that in a couple of years for sure everyone will love it. This is the first step, of course, there are some things we can improve, but this was Shimano’s goal, to have it tested in races to have the information. I will try it again in two days. I think with some small changes that this will be the future.” 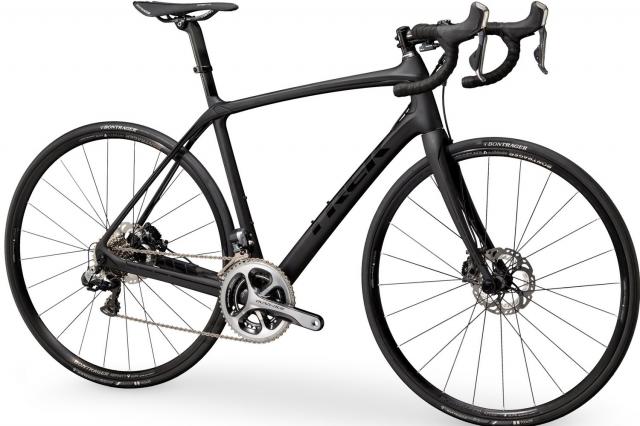 We don’t know if he first used them outside of a pro race to acclimatise to them, or whether this was his first experience on disc brakes. It is clear from his reaction that the risk of a hot rotor scalding a body part in the event of a crash is still a big factor facing adoption among the pro ranks. However, covering the rotor, which he suggests as a solution, would only add weight back to the system, when there is already a weight penalty. Unless Shimano could develop an aerodynamic cover that would kill two birds with one stone?

He was riding a Trek Domane, which has been available with disc brakes for some time. The longer wheelbase and chainstays of that model makes it easier to add disc brakes. The shorter chainstays on the Emonda and Madone raise chainline issues with the wider rear axle that is necessary to accommodate the disc rotor. Specialized has designed a specific freehub to get around this problem, while the new Cervelo R3 Disc has a custom FSA chainset with the driveside crank arm placed a few millimetres further outboard.

An obvious issue with disc brakes on road bikes at the moment is one of wheel changes. The Domane uses thru-axles at both ends, 15mm at the front and 142x12mm at the rear. The Team Sky Pinarello Dogma F8 Disk with Shimano disc brakes we spotted being raced last month uses conventional quick release axles.

That raises obvious challenges for the neutral support, so any puncture or mechanical would have to be resolved by a complete bike change. To be fair, complete bike changes are fairly common when the team car is near or it’s a pivotal moment in the race. Races have also been lost as a result of slow wheel changes though, so it's clearly a problem in need of a solution. And then there’s the issue of rotor size too. Will the UCI step in and issue a standard? 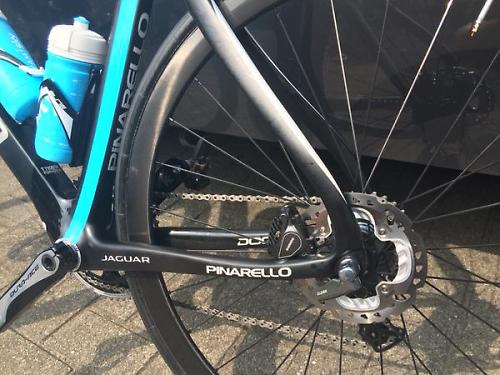 So there are issues to overcome, it's clearly early days for discs in the peloton, and these trials are a good way to soft launch disc brakes into the pro ranks. Let's see who is next to test disc brakes in a pro race. There's the Tour of Britain starting soon...