Of all the new bikes that have been filling the pages of road.cc over the past few months, arguably the one that has been getting the biggest response has been Cannondale’s new Slate, a gravel/adventure road bike rolling on 650b wheels and with a 30mm travel Lefty suspension fork.

Today I’ve been riding it. Not very far or for very long admittedly, just a quick blast around the woods and roads out the back of the huge Messe Friedrichshafen that (just about) contains Eurobike. Far from extensive enough for a proper review, but enough to give me a decent impression of how this new bike rides. And those first impressions are good: Cannondale has succeeded in delivering a bike that works both on the road and off it. According to Cannondale, the Slate is designed primarily as a road bike, but one that is capable of entertaining your adventurous spirit if you want to take the path less travelled. Gravel tracks, byways, bridleways, that sort of thing. There has obviously been quite a lot of hype with this new breed of gravel and adventure bike recently, but let’s not get sidetracked with all that just now, let me just tell you about the ride experience, because that is what is really important here.

So to put the Slate to the test, I searched out as many different surfaces to ride over as possible. The Eurobike organisers have helpfully laid out two test routes: one for mountain bikes and one for road bikes. I immediately headed for the mountain bike track. As you do. The off-road trail snakes up the hill. It’s narrow, surfaced with loose gravel, ideal for a mountain bike. A series of obstacles get increasingly technical. From rolling bumps, wooden planks half buried in the ground, steps and rocks, there’s a bit of everything here. I also go off-piste, and find some even better trails deeper into the woods. The Slate takes it all in its stride. The combination of the large volume tyres and the Lefty Oliver suspension fork really smooth out the bumps. My biggest curiosity about the Slate was the Lefty fork - would the 30mm of travel make any difference? When you push down on the handlebars, it’s clear there isn’t a lot of travel. It’s firm, too, with the recommended 175psi air pressure for my weight.

Hit an obstacle, however, and it becomes apparent that the Lefty fork lets you carry more speed over rough ground and through obstacles, much as you would expect of a bike with a suspension fork. Hit the road and the large knurled button on the top of the fork leg can be pressed to activate the lockout. In truth, I didn’t find it a necessity to lock out the fork on the smooth stuff. It’s not like it’s bobbing up and down madly when riding on the road. Even sprinting out of the saddle reveals it is well damped and composed. Handling is direct and there’s no unwanted flex from the Lefty - Cannondale has always proudly claimed the Lefty is stiffer than any other suspension fork on the market, and this holds true with the new Oliver. The available travel though is smooth. It doesn’t noticeably dive during heavy braking. Nor does it feel bouncy when sprinting up the road out of the saddle. It just works when you need it to, and doesn’t make a fuss when you don’t need it. It doesn’t ruin the road riding experience one bit.

Coming back down the mountain bike trail, on a swooping and curving bermed trail full of jumps and rollers, the Slate proves to be in its element. Gripping the drops, weight pushed back over the saddle, the Slate carves through the banked corners with the sort of poise that makes you feel completely at ease. It feels smooth and comfortable on this sort of terrain There’s no jarring impacts or wrist shattering feedback through the handlebars. It doesn’t feel nervous or out of its depth. Grip from the Maxxis tyres is plentiful. More than you would expect from a cut slick. Push the tyres too hard and they will drift, but I was doing some daft things into the corners just to try and find the limits. Ride sensibly (where’s the fun in that?) and it’s fine. As for off-road capability, well it takes a greasy muddy trail to put the tyre out of its comfort zone. But by this point I’m well past the stage that a regular road bike wouldn’t have been frantically waving a white flag. 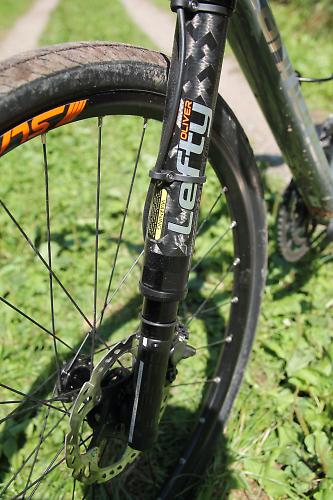 How about on the road? Well, the Slate feels surprisingly like a road bike should. It is nimble and light-footed. The position of the size large has a very normal road bike feel to it. The front isn’t terribly high. The wheelbase doesn’t feel madly stretched. Steering isn’t crazy fast or twitchy, in anything it’s quite slow. You can feel the effect of the bigger tyres when you turn the bars, but not in an overly negative way. 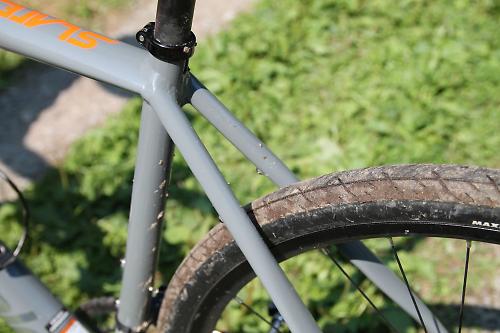 It rolls along a a decent speed, does the Slate. There’s no sluggishness getting it up to speed from a standing start, or accelerate up to higher speeds. With the 650b wheels wrapped with 42mm wide tyres, the outside wheel diameter is actually the same as 22mm tyre on a 700c wheel, according to Cannondale. So it’s no surprise that the rolling speed feels very similar to a conventional road bike. 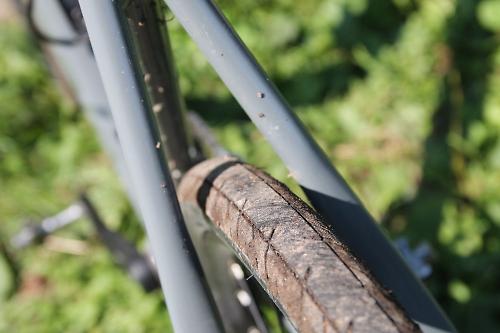 Cannondale wanted to give the Slate the performance and handling of a road bike. My brief ride reveals the Slate is able to easily hop between being a fast and sprightly road bike, and an entertaining and surprisingly capable off-road bike. What this short ride shows is that I can’t wait to give the Slate a proper, in-depth review.

The Slate’s aluminium frame has been developed using the same True Flow Modelling computer system Cannondale used to develop the new CAAD12, which has allowed the company to develop, using computer simulations, the best tube profiles and wall thicknesses for the different requirements of each part of the frame. 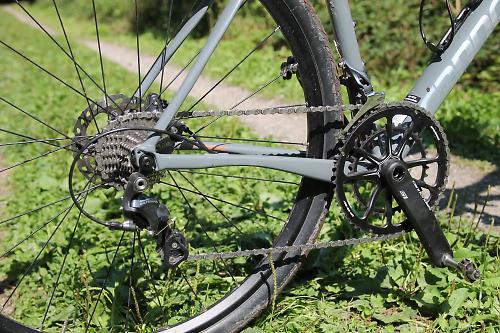 And there are some very shapely tube profiles, most particularly the chainstays and seatstays. The latter are wide and flat, which along with the slender seatstays should provide a smidgen of ride smoothness. The downtube is enormous, and the top tube is squashed where it meets the seat tube, reminiscent of the SuperSix Evo. Tyre clearance, as you would expect, is generous. Cannondale says there’s space for up to a 42mm tyres. With the Lefty fork there aren’t the same limitations. The bike I was riding was fitted with Maxxis Detonator 1.5in (38mm) wide cut slicks. Cannondale will also be fitting bikes with the more expensive Panaracer Pari-Moto tyres too. 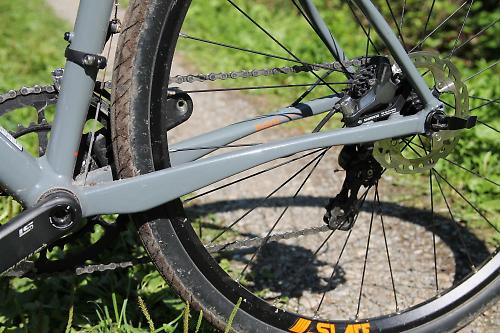 At the dropouts Cannondale has used a Syntace 142x12mm bolt-thru rear axle. The Lefty has a bolt-thru axle as well. There are hidden mudguard eyelets on the frame, which leaves the back of the frame looking very clean without any mudguards fitted. The Slate features internal cable routing, and it’s compatible with mechanical and electronic groupsets - using modular ports that are neatly positioned. There will be three bikes available when it goes into production. When that actually is, we don’t yet know. Bikes will be priced from £2,499 for a Shimano 105 build up to £2,995 for SRAM Force CX1.

I was riding the £2,799 Shimano Ultegra model. It partners a mechanical drivetrain with hydraulic disc brakes. Cannondale’s own Si chainset is used, along with new Slate branded aluminium rims and a Fabric saddle atop an aluminium seatpost.