Instead of the usual big glitzy launch event for a new bike, Cannondale has taken a different approach with its new Slate, preferring to tease us with short videos and tidbits of information released over the course of a few months. But a dealer show at the Williams F1 Conference Centre near Oxford yesterday, Cannondale presented a final pre-production painted sample of the new Slate, and it was my first chance to see the bike in the flesh. 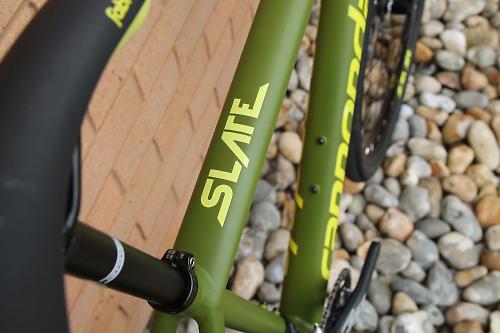 While the bike isn’t likely to be available until September or October, and this isn’t an actual production bike, Cannondale has confirmed there will be three models in the range. Each shares the same frame and Lefty Oliver fork, but use different groupsets. At the top, and the lightest model is the SRAM Force CX1 bike costing £2,995. Next is an Ultegra model at £2,799 and the most affordable is the 105 bike at £2,499. 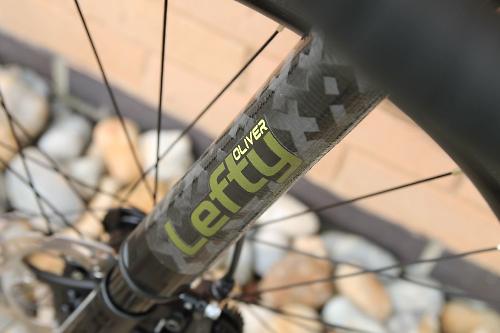 One thing's for sure, it’s a head-turner. Despite being surrounded by high-end and very shiny SuperSix Evos and Synapses, the Slate was getting the most attention at the show. That’s really no surprise - the paint job and Lefty fork ensure it is a radical departure from the rest of the Cannondale 2016 range. But it’s also because the Slate has piqued a lot of interest from cyclists who are perhaps warming to the idea of a road bike with fat tyres and a suspension fork designed to allow them to stray away from the confines of the road network, and explore the countryside away from heavily congested streets. Gravel racing in the US might have kickstarted this new category of road bike, that some are calling adventure, allroad, roadplus - Cannondale is going with gnarmac… I’m not sure that’ll stick personally. Whatever you want to call it, it’s clear that these types of bikes are rapidly evolving, but along different lines. The Slate is the boldest interpretation of a genre that has no clearly defined rules. The way Cannondale sees it, the Slate is intended to be a road bike first and foremost, with the handling and performance you’d expect and want from a road bike. But it can handle gravel, dirt, bridleways, towpaths, any sort of off-road trail you want to send it down really, without getting out of control. And all while aiming to inject a bit of fun and adventure back into road cycling. 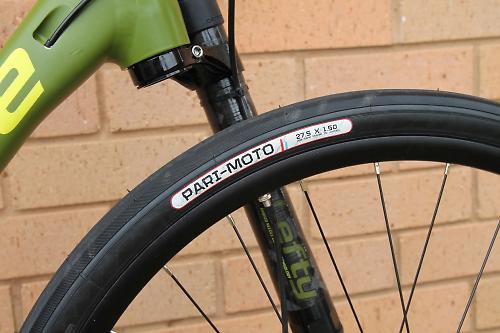 It’s a bold ambition, and the Slate is a bold product. It has an aluminium frame, the distinctive 30mm suspension fork with one fork leg, and big 42mm tyres on 650b wheels. Let’s start with that wheel size. Cannondale certainly isn’t the first to use 650b wheels on a road bike, it’s a wheel size popular on randonneur bikes from the past, and we’ve seen a few framebuilders dabbling with the wheel size more recently (including Richard Hallett), but Cannondale is a big company so it has obviously turned a lot of heads with its adoption of the wheel size on its newest bike. “The 650b x 42mm tyres give a cyclist a tremendous amount of confidence with that [larger] contact patch you have,” says Cannondale’s Global Director Sports Marketing man Jonathan Geran. “You run the tyre pressures a lot lower when it’s set up tubeless, between 40-50psi depending on rider weight and terrain, but never much more than 50psi. And you still have the rollout of a 700c x 22mm set up.”

Don’t think that huge tyre will make the bike slow on the road, though. “During prototype testing, engineers and designers riding prototypes during lunchtime rides, are riding along with us at 20, 21, 22mph in the group ride without any problems, and maintaining their speeds within the group on a road ride,” adds Jonathan. “But yet the capabilities he has to go off-road are expanded beyond what you can do on the road.” 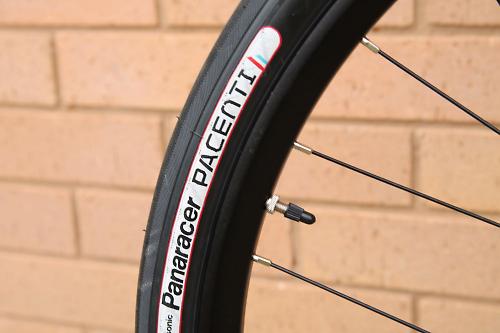 The Slate pictured, the most affordable 105 model, is fitted with Panaracer Pacenti Pari-Moto 42mm tyres. Panaracer has partnered with Kirk Pacenti, who was really behind the 650b/27.5in wheel size many years ago, to develop its range of 650b tyres. Panaracer has jumped into the gravel bike market with its GravelKing tyre recently, which has been reviewed on road.cc previously, but the Pari-Moto is clearly a more road focused tyre. It has a claimed 300g weight so the weight penalty over 28mm tyre isn’t that huge. The Slate looks like the type of bike that, with a change of tyres, could be used to conquer any sort of terrain, and that’s exactly what I suggested to Jonathan, but he told me Cannondale has actually designed the bike to be solely used with this tyre - though obviously there’s nothing stopping you changing them yourself.

“The initial concept is trying to have the most capable and confident road bike with one tyre, and there are a couple of design choices behind that,” reveals Jonathan. “Having said that, we have looked at different file treads and raspy pattern treads to try on this bike, and it’s certainly something that can change your focus on the bike. 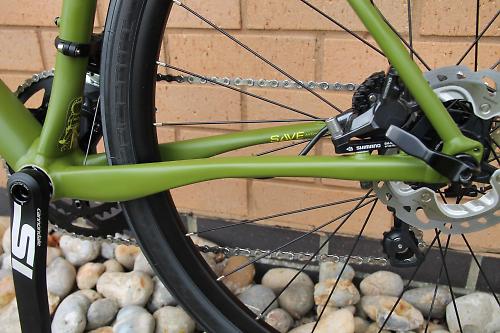 There are several benefits to the use of 650b wheels according to Cannondale. As well as the increased volume for smoothing bumpy terrain while maintain the same outside measurement as a 700x22 set up, the 650b wheels allowed Cannondale to maintain a geometry on the Slate that is very close to its road bikes.

“The use of a 650b wheel allows us to use a 405mm chainstay,” reveals Jonathan. “If you put a 700c wheel in there, you have to expand the chainstays out to 430 or longer, in order to get the clearance and tolerances you need. When you do that, you start to extend your wheelbase, and change the handling characteristic of the bike.” 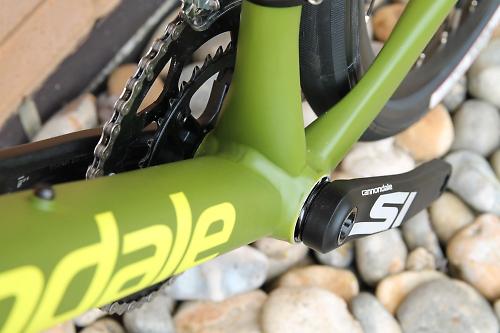 Of the many (and we’ve seen a lot) gravel and adventure road bikes that we’ve seen so far, most have borrowed the longer wheelbases from endurance bikes, or the longer chainstays from cyclo-cross models. Cannondale however has sought to keep the chainstays as short as a road bike, but add more length into the front centre and slacken the head angle, to provide the sort of handling it wants for this bike.

“We wanted an elite road feel, in acceleration, climbing, cornering and handling, so we wanted the rear wheel tight and tucked in. The other thing though is it puts that rear wheel right under the rider's weight, so when you’re off-road, on more aggressive terrain, and you're seated in the saddle, you’re putting more weight on the contact patch, which helps provide more traction and less wheel slip from using a slick tyre on dirt,” adds Jonathan. 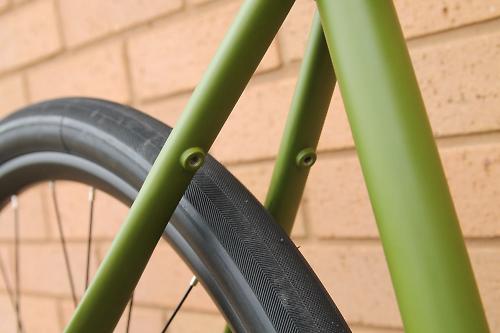 Plenty of compelling reasons for the wheel size then. The other standout feature of the new bike is of course the Lefty Oliver, a novel suspension fork design that Cannondale has been using on its mountain bikes for many years. This one has been specially designed with just 30mm of tuneable suspension travel wrapped up in carbon fibre to reduce weight. The suspension travel ought to be just enough to provide more off-road capability, certainly more control and vibration absorption than the big tyres can offer.

Cannondale hasn’t revealed a weight for the fork. The lightest mountain bike version is 1855g, though that has 140mm travel, so the Oliver should be significantly lighter. Still, the whole bike isn’t as heavy as you might imagine. I didn’t have my scales with me, but Cannondale reckon the top-end SRAM Force 1x11 build should weigh in at about 18lb (8.16kg) which is a pretty decent weight. Pressed on whether Cannondale might offer a rigid Slate in the future, it certainly didn’t rule out the possibility. 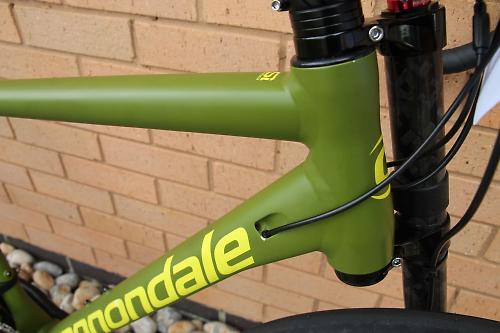 The Slate’s aluminium frame has been developed using the same True Flow Modelling computer system it used to develop the new CAAD12, which has allowed them to develop, using computer simulations, the best tube profiles and wall thicknesses for the different requirements of each part of the frame. There’s some extensive profiling of the chainstays, the seatstays are wide and flat, to enable some deflection, and the down tube is enormous to provide the required stiffness. There’s plenty of tyre clearance between the 42mm tyre and frame at the rear wheel, and obviously no limitation up front with the Lefty fork. 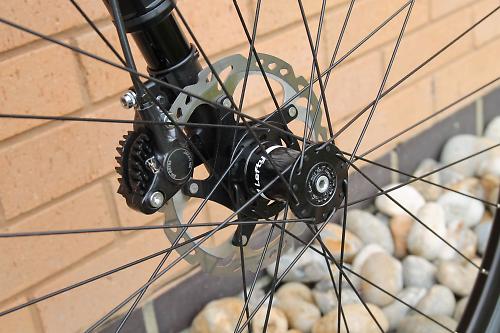 The frame has a Syntace 142x12mm bolt-thru rear axle and the Lefty has a bolt-thru axle as well. There are hidden mudguard eyelets on the frame, which leaves the back of the frame looking very clean without any mudguards fitted. There’s no way to fit a conventional road bike mudguard to the Lefty. Cannondale is rumoured to be working on something, but there are mountain bike mudguards that can fit, using the vacant space in the bottom of the steerer tube, so it’s not impossible to fit a full set of mudguards. It’s a disc-only bike, naturally, and uses Shimano’s Flat Mount design. The frame is compatible with mechanical and electronic groupsets, with smart modular ports that are neatly positioned. The frame uses a 27.2mm seatpost, rather than the 25.4mm from the Synapse that might have been expected. That would allow a dropper post to be fitted if though there are only a few 27.2mm dropper posts on the market, most are commonly 30.9 or 31.6mm. As I said at the top of this article, the bike pictured here is a pre-production sample. They weren’t letting anyone ride it (shame) and I asked if I could arrange a ride after the show, but sadly the bike is being sent straight back to the US. It’s not looking like the Slate will be available until September, maybe even October, at the earliest. This bike does provide an indication of the colour palette and graphical approach it is going for, which looks about right for the style of riding the bike is intended for. 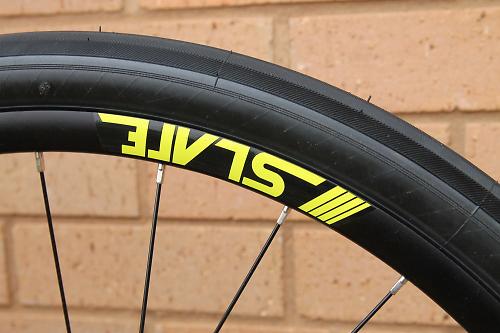 Hopefully the next time we report on the Slate, it'll be a first ride impression, because I am itching to ride the thing.