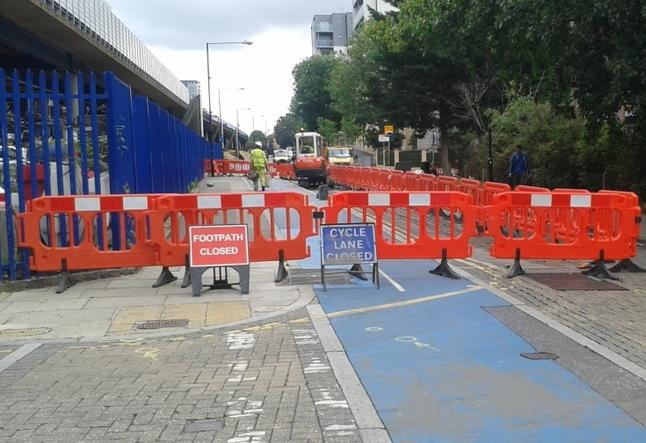 Transport for London and Tower Hamlets Council are ignoring safety guidance on managing cycling around roadworks with a three month closure of Cycle Superhighway 3 (CS3), says the London Cycling Campaign.

The group says: “For years the CS3 Cable Street route has been notorious for random closures for all sorts of street works.

“Sections of it seem to be dug up every other month.”

Now, thanks to works to improve pedestrian crossings of the road and cycle lane, the lane is entirely blocked, and the remaining road is one-way only, causing chaos for riders who are not signposted onto the road or pavement.

London cyclists to benefit from expanded plans for Cycle Superhighway 1

Nice bit of driving on CS3 in East London

LCC says this could be the moment to experiment with making the road traffic-free altogether.

“There is a great opportunity to trial the effects of filtering out through traffic on this route during construction.

“Motor traffic can be diverted via Pinchin St.

“Filtering out motor traffic to provide adequate space for cycling has been proposed by LCC and is being considered by Tower Hamlets council.”

The group says: “These are all welcome improvements but fall far short of the Mayor's commitment to the LCC Love London Go Dutch campaign to ensure that the Cycle Superhighways are completed to the best practice design standard.”

Earlier this year we reported how a cyclist with a helmet camera captured the moment a man riding one of London’s Santander Cycles hire bikes was apparently targeted in an attempted bike-jacking – with fellow riders helping fend off his attackers as a fight developed.

The footage of the incident, which happened on Cycle Superhighway 3 on Cable Street, east London at around 4.30pm on the afternoon of 1 June, was posted to YouTube by user Dark Shadow.

With several cyclists stopped at a red traffic light, a man who had been standing nearby seems to try and grab the hire bicycle, saying, “This is my bike,” with the rider pushed to the ground.

Other riders then intervened, causing the apparent mugger and his companion to leave the scene.