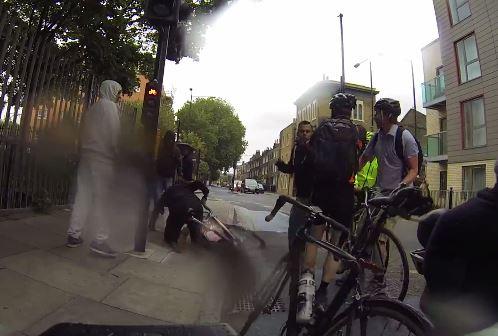 A cyclist with a helmet camera captured the moment a man riding one of London’s Santander Cycles hire bikes was apparently targeted in an attempted bike-jacking – with fellow riders helping fend off his attackers as a fight developed.

The footage of the incident, which happened on Cycle Superhighway 3 on Cable Street, east London at around 4.30pm on the afternoon of 1 June, was posted to YouTube by user Dark Shadow.

With several cyclists stopped at a red traffic light, a man who had been standing nearby seems to try and grab the hire bicycle, saying, “This is my bike,” with the rider pushed to the ground.

Other riders then intervened, causing the apparent mugger and his companion to leave the scene.

Asked in the comments to his post whether they had been trying to steal the bike, Dark Shadow, who has passed the video to the police, said: "That's what I understood! The guy in black kept saying that was his bike."

According to some others commenting on the video, such incidents aren’t uncommon.

One said: “I know here South of the river they get stolen quite a bit from people, the kids then just ride around pulling wheelies and getting up to mischief with them.”

Another added: “I was speaking to a Serco employee on Sunday (they maintain the bikes) and he said that gangs hang about and watch for someone who doesn't lock the bike back in properly and the steal it and hire them out to unsuspecting tourists.”

The Metropolitan Police said last month that bike-jackings in London are now running at around 10 a week – although typically the targets are people riding expensive bikes, which the muggers presumably seek to sell on.