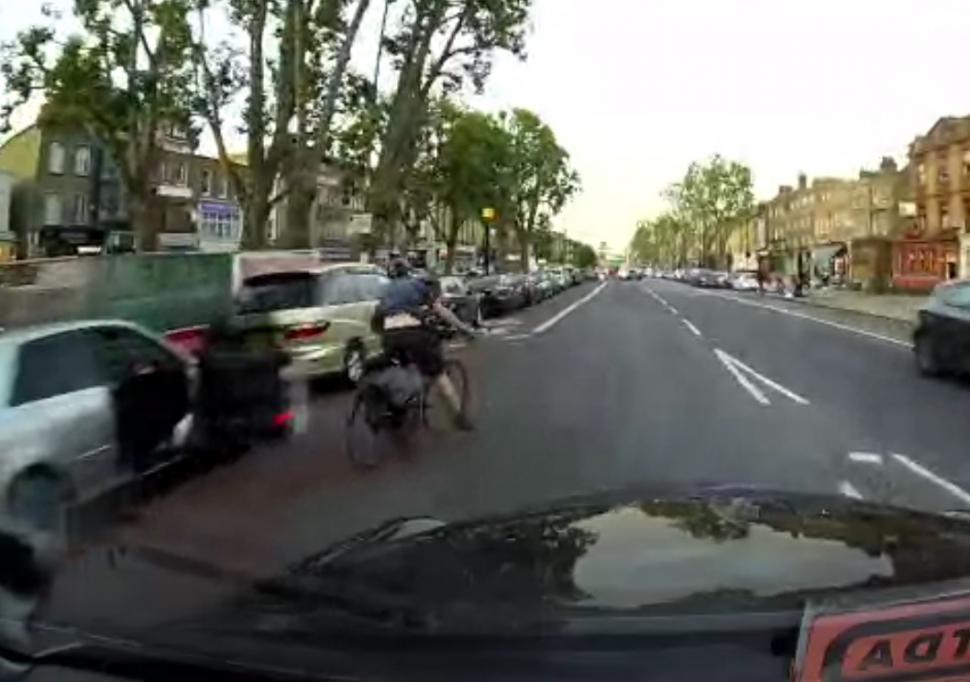 A recent video posted to Twitter by a London black cab driver captures the moment when a cyclist is doored, causing him to veer and fall in the path of the taxi. The London Evening Standard reports that the incident took place on a stretch of Cycle Superhighway 2 along Mile End Road.

The cyclist is riding in the cycle lane, but must move towards the outside of it as he approaches a long row of parked cars. As he passes one car, the door opens. He veers, loses control and falls in the road with the black cab stopping seemingly inches from him.

The driver subsequently wrote on Twitter that the cyclist had in fact been hit by the door, but while he was left with a few cuts, he was otherwise okay.

“I think they should make it an offence for anyone hit cyclist with door,” he wrote. “That way everyone would check before opening.”

The taxi driver took the details of the person who opened the car door and says they will be paying for any damage. For his part, the cyclist seemed grateful he wasn’t run over. "Just spoke to cyclist, he's nice n well. Man wants to take me out for a drink now."

The taxi driver also pointed out how much worse the incident could have been had he been driving a bus or a truck. In 2012, a Surrey motorist was acquitted of manslaughter after allegedly opening his car door in the path of a cyclist without looking, causing him to be killed under the wheels of a bus.

This section of CS2 is earmarked for improvements. Work is being carried out to provide segregated cycle lanes along the A11 between Aldgate and Bow with work on Mile End Road due to be complete by April 2016.