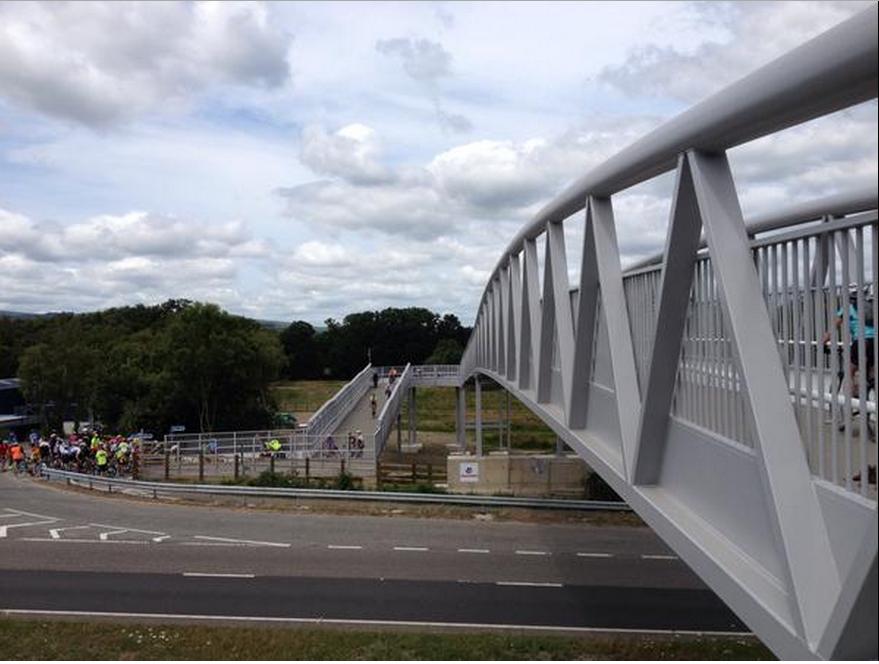 Hundreds turned out to celebrate the opening of the bike and foot bridge, which will save them from 'running the gauntlet' of the A38...
by Laura Laker

Hundreds turned out to open a new bike and foot bridge in Devon, which has been described as central to encouraging cycling in Dartmoor National park.

It is hoped the Dogs Bridge, over the A38 between Bovey Tracey and Newton Abbot, will break down a major barrier to people cycling in the area, by linking the Park to the mainline station at Newton Abbott, and its opening has been welcomed by local cyclists.

Completing the Stover Way via the Stover Canal  on NCN28, the bridge is part of a £7m Granite and Gears project to increase cycling on Dartmoor by 43% by 2018, with hopes it will bring £6m to the local economy.

Councillor Stuart Hughes, Devon County Council Cabinet Member with responsibility for cycling, said: “This bridge is a central part of the Granite and Gears project, providing a safe crossing over the A38 to link local communities and improve access to Dartmoor. I’m sure it will become a popular route. The landowners, Sibelco and Imerys, must be thanked for helping make this scheme possible by enabling this bridge to be constructed on their land.”

Councillor George Gribble, Devon County Councillor for Bovey Tracey, said: “I’m overjoyed that this bridge is opening. It provides an important facility for local people but will also bring visitors into our local communities of Bovey Tracey and Moretonhampstead. Providing this link between Newton Abbot and Moretonhampstead is great for families looking to cycle off road with their children.”

Only another 24 hours! - cyclists no longer have to run the gauntlet over the A38 @CycleDevon @travel_devon pic.twitter.com/5Havu5JiDk

In August 2013 the Granite and Gears project was awarded £4.4 million from the Department for Transport’s (DfT) Cycling Ambition fund for a network of multi-use trails to the moor, with £3m from Local Transport Plan funding and section 106 money and contributions from the local councils and the Park. A further £675,000 was awarded from the DfT this year.

The project, led by Dartmoor National Park and Devon County Council, will also see new sections of the National Cycle Network 27 created on the Plym Valley Trail. In April another part of the project, a new cycle and foot bridge was lifted into place at Peekhill on a disused railway, part of the Drake's Trail route between Tavistock and Plymouth.

Devon MP Sarah Wollaston, a member of the All Party Parliamentary Cycling Group, announced she would be tandeming across the Dogs Bridge today.

@CycleDevon wonderful, I'm looking forward to tandeming across it on Sunday