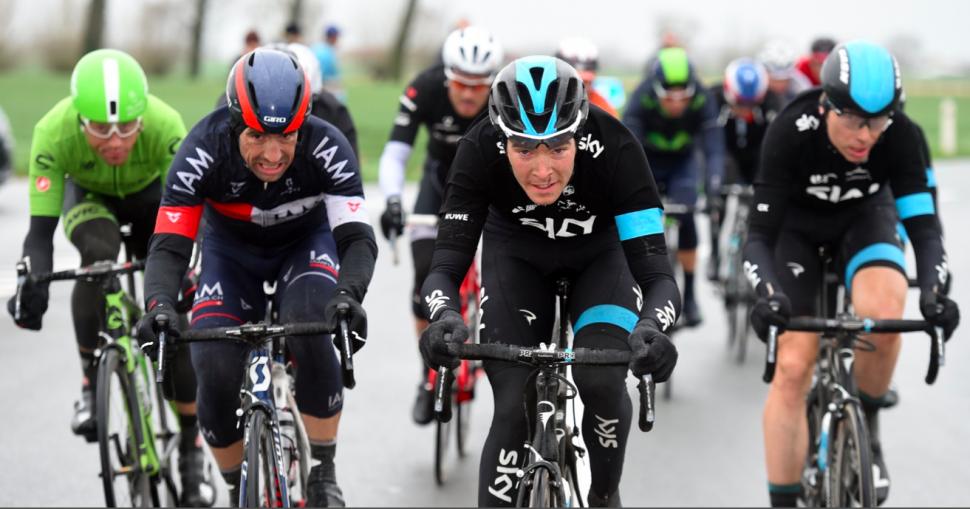 Rapha’s partnership with Team Sky has been a fruitful one, with the London-based clothing company gaining access to and feedback from the likes of Chris Froome, helping it to develop new clothing that meets the specific demands of racing in the toughest and most demanding conditions.

Many of the developments from this partnership with Team Sky have eventually found their way into Rapha’s growing Pro Team range. And it’s set to add two more, the Pro Team Shadow Jersey, coming later this year, and the Extreme Rain Jacket, which Rapha says has no current timeline for release. We'll just assume that means it's not ready for production yet, but you can be certain it will be soon.

Both have been put to use by Team Sky during this season and you might spot them during the Tour de France if the conditions demand it.

It’s designed for riding in the rain and wind and the changeable conditions that can make clothing choice really tricky, especially for racing in. Rapha has designed this new jersey to be adept at dealing with such constantly changing conditions, and reckons it can be worn all day.

Castelli has enjoyed huge success with its iconic Gabba top which is designed for racing in bad weather, offering rain protection but with fit, comfort and breathability of a jersey that means you can leave it on for longer compared to a traditional rain cape which you'll want to whip off the moment it stops raining, but that's not always practical when racing.

The problem with regular rain jackets, says Rapha, is that the laminate and membrane construction keeps rain out, but also prevents perspiration from escaping. It’s the age-old problem with riding in the rain; don a waterproof jacket to keep the rain out, but boil-in-the-bag and get damp from sweat on the inside instead.

Rapha has therefore developed a fabric with a DWR (durable water repellent) finish that is applied both to the yarn and the finished fabric, which it claims lets rainwater bead off, but the lack of a laminate layer lets body heat and perspiration escape through the fabric, maintaining the essential breathability to avoid the dreaded boil-in-the-bag syndrome.

Rapha claims the jersey “is far more breathable than all other wet-weather options, yet maintains impressive ‘hydrophobic’ qualities to keep the rain off too.”

That’s about all we know at this stage, we’ve no word on options (short or long sleeve) or prices, but Rapha does tell us the Pro Team Shadow range will be released later this year, and it also sounds like it has more up its sleeve for this new jersey as well.

For really foul weather, Rapha has developed the Extreme Rain Jacket. The clue is in the name with this one. Rapha says it’s a response to the 2013 Milan-San Remo (which rocketed the Gabba into thousands of wardrobes around the country) when Team Sky’s Head of Performance Operations Rod Rod Ellingworth challenged Rapha to developed a survival jacket that could “begin the recovery process during the race, rather than afterwards, and maintain the health of riders in these trying conditions.”

Rapha has responded to his demands with the Extreme Rain Jacket. It employs a new fabric called Outlast that uses a “phase change” technology that apparently can store heat, say from the warmth of a team car, and maintain this stored heat when given to a rider. It’s technology developed by NASA, which started developing phase change materials to regulate astronauts temperature in the 1980s. You can read more about it here, and here's a short video explaining its benefits.

If that wasn’t clever enough, the jacket has a heat pad bonded into both lower sleeves that provides three colour-coded temperature settings, so the temperature can be controlled. Inside the jacket is a fibre-pile fleece lining, wide sleeves to fit over bulky gloves, and oversized velcro zip pullers. It has a neoprene hood with an integrated peak that fits under a helmet, and an extra long dropped tail. The outer layer is constructed from the same fabric used in Rapha’s existing Hardshell jacket.

There’s no timeline for release on this jacket, it’s still in development according to Rapha. We'll update this story when we get more information. For now the best thing is simply to pay close attention to Team Sky if there's any racing in bad weather during the rest of the Tour de France.