The 2015 Tour de France gave us the first opportunity to see the brand new Cannondale SuperSix Evo, launched just a few weeks before, being put to use by the Cannondale-Garmin pro cycling team. This one belongs to young Dan Martin who will be hoping to use it to make an impression on the hillier stages. 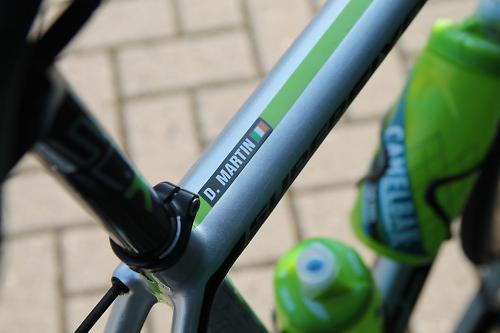 So new is the updated SuperSix Evo that the team hadn't ridden these actual bikes up until the week before the Tour got underway in Utrecht. They had however been riding plain green versions of the new bike for a few weeks before, to allow them to acclimatise to the differences from the old and new bike. 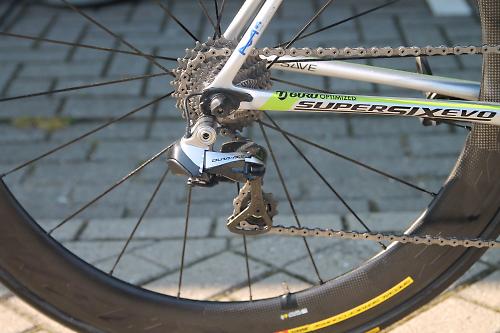 Dan Martin’s race bike is a size 52cm frame (he’s 1.75 m tall) and is built up with a Shimano Dura-Ace Di2 groupset with Cannondale’s own SiSL2 chainset, with an SRM Power Meter and FSA chainrings. 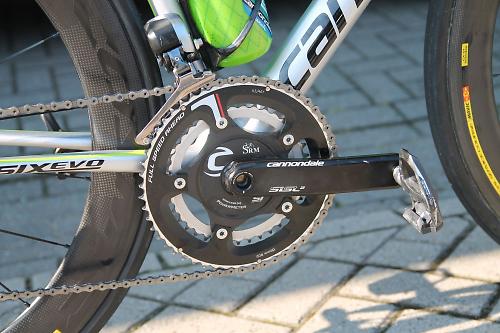 The team is one of two to ride Mavic wheels. On Martin’s bike are Cosmic Carbone Ultimate wheels with Mavic branded 22mm tubular tyres glued to the rims. 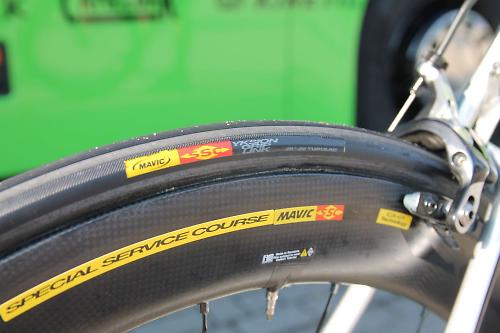 As well as supplying chainrings, FSA also supplies the main finishing kit. So there's a carbon SL-K seatpost, an OS-99 carbon wrapped stem, and an aluminium handlebar with a traditional bend, in a 42cm width. 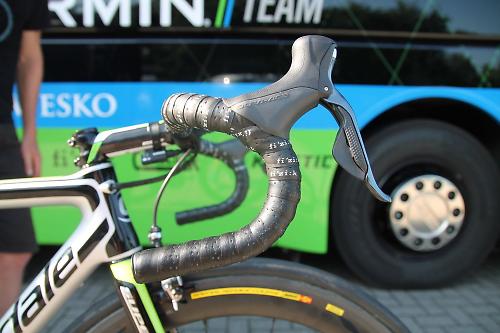 Martin has an interesting bar tape wrap going on here, and he also angles his hoods up quite a lot as well. 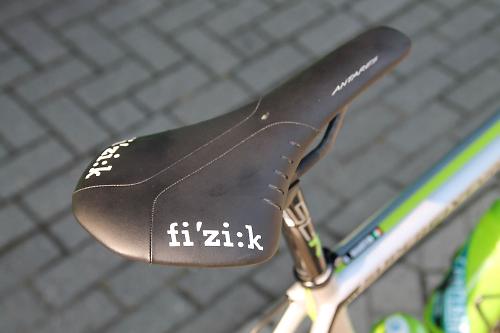 His favoured saddle is a Fizik Antares in plain black. Martin is also using the brand new Garmin Edge 520, fitted to a Garmin out-front mount. These are so new they had literally just arrived with the team the day before and this one was box fresh. 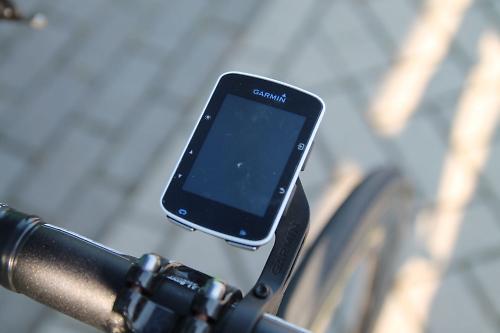 You could be forgiven for thinking there are no differences between this new Evo and the previous model, which was first launched back in 2011. Changes have been subtle to say the least, but they have been fundamental, if Cannondale’s claims are to be believed. 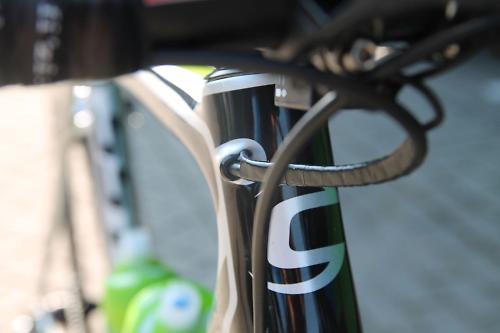 One immediately obvious change is the transition to internal cable routing - the previous Evo was one of the few top-level race frames with externally routed gear cables, just the brake cable was routed internally. The frame is Di2 compatible, with the wiring entering alongside the rear brake port, and taped to the brake cable outer.

The US company reckons it has made the new SuperSix Evo lighter, stiffer, more compliant and improved the aerodynamics, changes it has achieved without a drastic visual makeover compared to the bike it replaces. 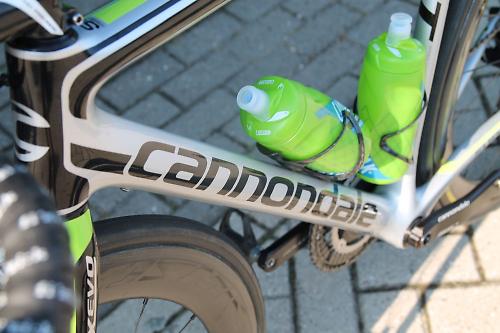 The previous Evo was a very competitive frame on weight, and despite its age has still been in the elite club when it comes to frame weight. Still, the Evo is lighter, the frameset (that's the frame, fork, headset and seatpost) drops 67g, which it claims makes it lighter than rival framesets from the likes of Specialized and Trek. 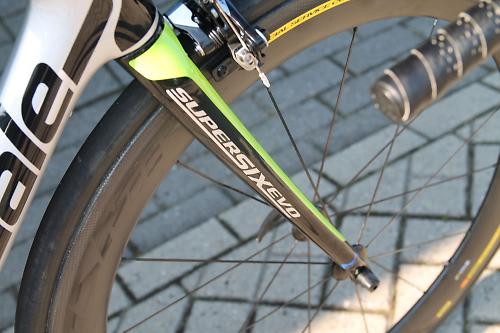 A chunk of the weight saving has come with the development of new fork, which now weighs 280g, down from 320g. It’s visually a lot slimmer, a profile which Cannondale says improves front-end compliance. 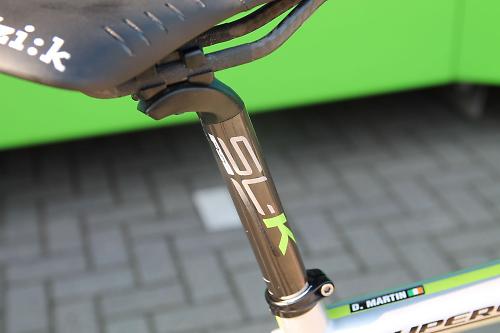 Also leading to improved compliance is the skinny 25.4mm seatpost borrowed from the Synapse endurance bike.

While it’s not a true aero road bike like the new Specialized Venge or Trek Madone, Cannondale has subtly altered the profile of the main tubes to reduce drag. It’s also repositioned the seatpost water bottle mount, lowering it, which it reckons provides a 6 watt drag reduction at 40kph. 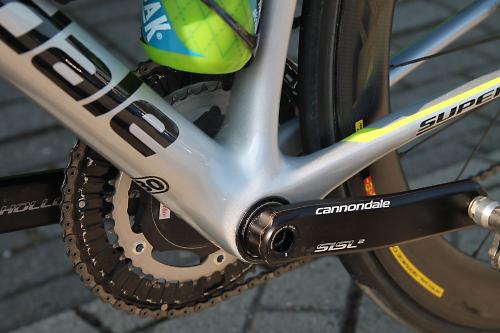 The new Evo makes use of the wider BB30a bottom bracket, which expands the shell width from 68 to 73mm. That allows the chainstays and seat tube to be enlarged. There’s a new one-piece rear stay assembly with asymmetrically oversized chainstays. The carbon fibre layup around the wider bottom bracket shell has been revised and stiffness increased as a result. 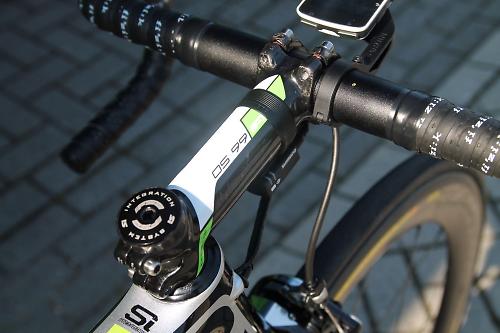 Cannondale promotes its own SiSL2 chainset and the team bikes are all equipped with it. The chainset has been modified to have a narrower design to keep the Q-factor with the wider bottom bracket shell the same as the previous bike. 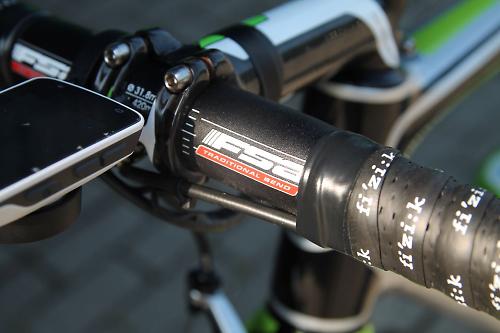 With wider tyres prevalent in the pro peloton, the SuperSix Evo now accepts up to 28mm tyres.

More bikes and tech from the 2015 Tour de France.