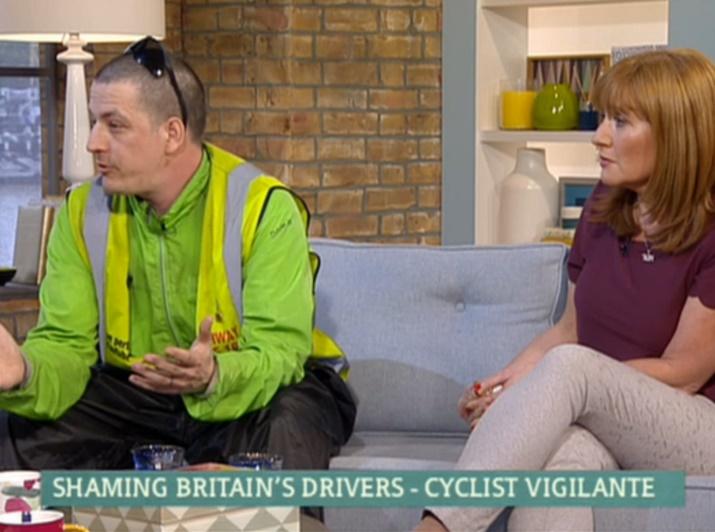 Rise of cycle cams debated on This Morning

Earlier this week, ITV’s This Morning invited two guests on to debate the increasing popularity of helmet cams in a segment entitled ‘Shaming Britain’s drivers – cycling vigilante’. The portion of the show in question is currently available to watch via the ITV Player.

The segment opens with the footage of a woman caught eating a bowl of cereal while driving which was recently uploaded by cycle instructor, David Williams. Williams was subsequently the subject of a Daily Mail article by Michael Gove’s wife, Sarah Vine, which branded people who use helmet cameras the "Cycling Stasi." In the article, Vine described those who used helmet cams as "infuriatingly, throat-throttlingly, red-mist-inducingly smug."

The two people involved in the This Morning debate were Dave Sherry, a bus driver and cyclist who earlier this year claimed that his footage had resulted in around 50 convictions, and journalist Angela Epstein. A frequent guest on television debates, Epstein was also the ghost writer of The Art of the Loophole: Making the Law Work for You by celebrity lawyer Nick Freeman.

“First of all, I don’t like vigilantism,” she begins, before addressing Sherry directly.

“You say you keep your eyes on the road. I’m sure you try and do that. I don’t see how you can be a law-abiding cyclist and at the same time kind of try and police everybody else. This smacks of kangaroo justice.”

Epstein concedes that there are motorists who do ‘incredibly stupid things’ and points people towards a recent Daily Telegraph article of hers in which she argued that drivers should be obliged to switch off their phones altogether and that even hands-free phone use can be distracting.

However, while she at one point says that ‘not all’ cyclists are ‘horrendous’ on the roads, that sense of perspective seems lacking when she later describes how she had observed the cyclists on London’s roads in the taxi on the way to the studio. “They’re absolutely shocking. They just don’t care,” she says.

Epstein believes that, “one can cycle badly, cause an accident and more often than not it will be the driver that will be at the very least prosecuted.”

She also appears to believe that cyclists are somehow exempt from criminal charges whereas there is “a whole canon of driving law” and questions why there is no cyclists’ equivalent to a driving test.

“They’re not obliged to do the things that we have to do to ensure that we understand road safety. If you want to campaign for something – look at everybody who’s anywhere near the roads. Make there parity there because cyclists can be even worse than motorists.”

In response, Sherry – who drives professionally – repeats a point he has made earlier, that in a collision between a car and cyclist, the cyclist will always come off worse. It is unclear whether the implications of this message are fully understood by those around him.