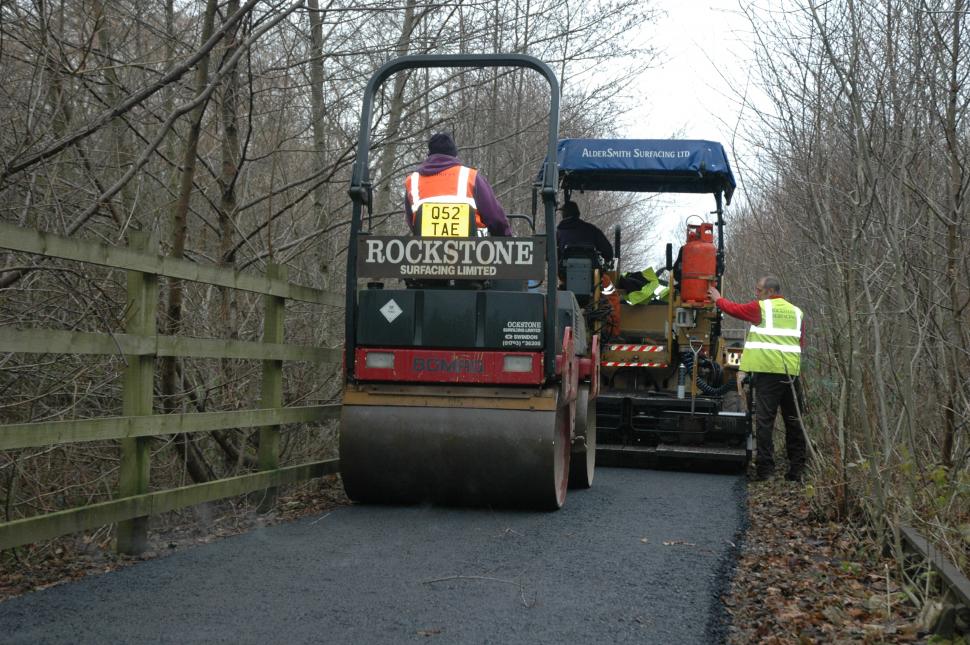 £12,500 to be spent on bumpy start to cycle path
by Tony Farrelly

Cyclists using the Colliers Way section of the National Cycle Network Route 24 won't have to clench their teeth for the first quarter of a mile anymore because Sustrans has won funding to have it tarmac'd over.

Since the Colliers Way opened in 2004 thousands of leisure cyclists have enjoyed the beautiful landscape through which it makes its way – including the hill that Jack and Jill supposedly fell down. However, not many will have savoured the first stretch, indeed quite a few have probably turned around assuming they were on the wrong track because the first section is made up of loose chippings which were left in place in case the railway was ever re-instated.

Sustrans, which created the National Cycle Network, has now successfully bid for £12,500 from Natural England to tarmac the section under the Countryside Stewardship Agreement.

Sustrans Area Manager Rupert Crosbee said: “This bumpy section can make cyclists feel as though they are shaking their teeth out riding along there. And although it is the only bad bit of the path, it will have been enough to stop some people pedalling the entire route. So by smoothing out this first section we can hopefully encourage thousands more people to enjoy one of the National Cycle Network’s most picturesque routes.”

Eugene Kertzman, of Somer Valley Wheels, which runs four regular rides each week and has over 120 participants, said: “This is great news for our riders because some haven’t cycled for over 40 years and this rough, downhill stretch is the first one they have to tackle. Smoothing the surface will make it much less daunting and will hopefully encourage many more to join in the New Year.”

Chris Westcott, from Natural England’s Land Management Team, said: “We are very pleased to help fund this additional surfacing work, which will see this popular route fully completed and make it more suitable for a wider range of users.”
The Colliers Way stretches 18 miles from Bath to Frome via the Dundas Aqueduct and will eventually form part of a continuous 81 mile-long cycle route from Bath to Southampton.

This just leaves the roughest part of NCN 24 to be tackled the traffic free section between Midford and Wellow, before the start of the Colliers Way, which passes through some spectacular scenery but again is surfaced by old railway ballast and is much longer making it only really rideable on a mountain bike unless you simply want to find out just how much your road bike can take.