Zipp has unveiled a new 404 Firestrike Tubular wheel that it calls its “most advanced race wheel ever”, and has updated the 404 Firestrike Carbon Clincher that it initially launched last year. Just 404 wheelsets in each design are being made – see what Zipp has done there?

One of the 404 Firestrike Tubular’s main features is what Zipp calls Carbon Shield technology. What’s that? According to Zipp, it’s a new carbon layup method for manufacturing the outer diameter of the carbon rim in order to create its most durable and impact-resistant carbon wheel ever. “The Carbon Shield is achieved through a new ply orientation of unidirectional carbon and mould tooling design to achieve the optimal laminate properties for a Firestrike rim,” says Zipp.

“This new process was verified and refined in 2013 during test riding sessions with top riders from one of Zipp’s UCI ProTeams. These sprinters and strongmen hammered away on prototype wheels built with a variant of Carbon Shield on le Carrefour de l’Arbre, one of Paris-Roubaix’ punishing five-star cobblestone sectors. The pros took repeated test runs on the cobbles at race speed, including with lower than normal air pressure, yet the rims remained undamaged.”

The wheels also feature newly designed titanium quick-release skewers that have a wider handle than before that’s intended to provide more leverage.

The Zipp 88/188v10 hubs are fitted with CeramicSpeed hybrid ceramic bearings – ceramic balls running in steel races. The idea is to keep the resistance as low as possible. The bearings now come with a set preload; they’re not adjustable. This helps to bring the weight down a touch, the v10 hubs being 20g lighter than the v9 ones. 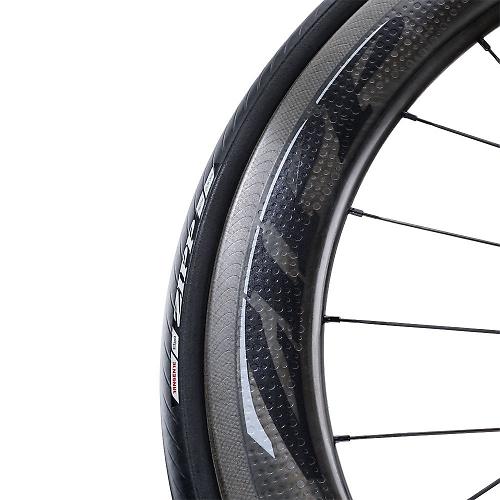 The 404 Firestrike rim design shares many properties with Zipp’s existing 404 Firecrest and it’s also 58mm deep. The profile is slightly different, though, the Firestrike coming with a maximum width of 27.8mm compared to the Firecrest’s 26.53mm. The Firestrike’s width at the brake track is a touch higher too: 26.4mm compared with 24.73mm.

Zipp claims that the Firestrike has a 34% reduction in side force while the aero performance is maintained.

The 404 Firestrike features what Zipp calls its Showstopper brake track technology: a pattern that’s moulded into the brake track with the addition of a silicon carbide (SiC) surface that’s designed to improve wet weather braking.

Zipp says that wheels equipped with the Showstopper tech deliver “greater stopping power in wet conditions than any [other] carbon wheel ever produced, offering braking on par with aluminum braking surfaces”.

The surface is said not to wear out brake pads any faster than normal. You do need to clean that brake track with a cloth from time to time to remove gunk and retain the braking performance. 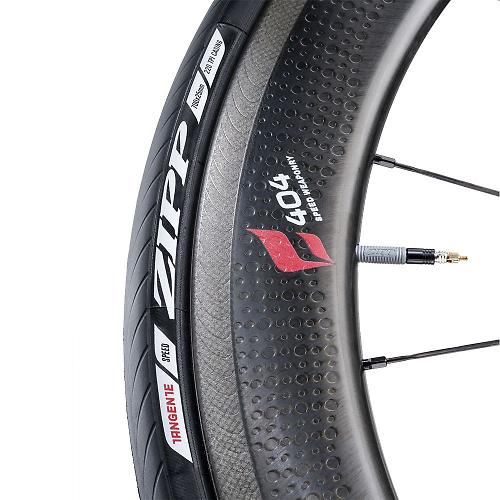 Both the tubular and clincher models are built with 18 Sapim CX-Ray spokes at the front and 24 at the rear. The tubular wheelset has a claimed weight of 1,395g while the clincher wheelset weight is 1,620g. The pricing is the same for each: £1,250 for the front wheel and £1,500 for the rear wheel.