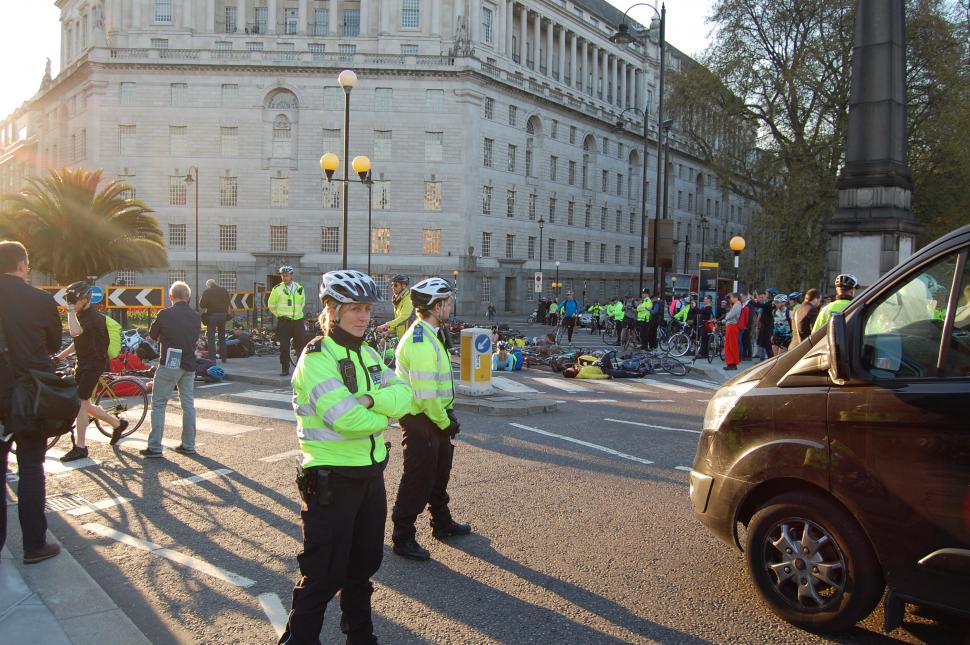 Mass rides won't be able to cycle as one group through junctions after police withdraw support...
by Laura Laker

London's police will no longer provide officers for mass bike rides in the capital, in the face of budget cuts and to minimise traffic disruption, Road.cc has learned. Where the Metropolitan Police once provided officers on motorbikes for protests and mass leisure rides on open roads, allowing cyclists to travel as one group across junctions, now a handful of rides will be assisted at the police discretion - the rest will have to obey traffic signals.

Transport for London (TfL) is now responsible for regulating mass rides. The first event to be affected was this year's Tweed Run, whose organisers say they found out about changes "very late in the process".

The London Cycling Campaign (LCC) says "iconic" events like this should be facilitated by both TfL and the police, saying keeping riders together minimises traffic disruption.

Chief Superintendent Colin Morgan of the Met's Public Order Branch said: "Many peaceful events and protests take place every year in boroughs throughout London without any police presence whatsoever."

He said the decision for police to support any event in the capital depends on the "risk of crime and disorder, the likelihood of a breach of the peace or the need to preserve life or property".

Money too tight to marshal

A further police source told Road.cc as budgets were being cut the force had to look at where its resources went, and said most of the time even the prime minister doesn't even get an escort in the capital.

He said: "85% of our budget is spent on people and as soon as you start talking about 20% cost cutting you have to look at people."

"I think most people would recognise that 30 children [crossing the road] with their two teachers need to be together at the same time. I'm not sure if the public opinion would agree that it's reasonable for a bike ride of 100 people to think 'we should stay together'."

A TfL spokesperson hinted it might allow mass rides to stop traffic if marshals are appropriately trained, but were unable to clarify what training might be required.

The spokesperson said: "We have long supported the Tweed Run in Central London and work with them to ensure their ride is a success. Due to the Metropolitan Police no longer providing officers to support the ride, we have requested that any stewards who look to hold traffic while the ride passes through should be appropriately trained and have relevant approvals from the highway authority.

This means events must notify transport for London and any borough a ride travels through before proceeding.

However, the police source said: "The only civilian with powers to stop traffic, apart from police, is PCSOs and lollipop ladies.

He said while recreational rides aren't high priority, policing a recent die-in in Westminster was "the right thing to do" because the police trusted attendees to be cooperative, adding some political events, like London Cycling Campaign (LCC) protest rides, are supported by police as part of their duty to support free speech.

However the LCC's Tom Bogdanowicz said certain events are iconic and marshaling riders together helps the spectacle while minimising disruption.

"Cycling brings colour and vibrancy to the capital and rides, like the Tweed Run, should be encouraged and facilitated by TfL and the Met. with the minimum of red tape," he said.

"The Tweed Run merits treatment as an iconic London event, like the changing of the guards, that adds to the beauty  and rich diversity of the capital . So in the same way as the changing of the guards, the Lord Mayor's show or a Royal motor convoy it should be assisted by the police and TfL, and the 600 riders, in their impeccable dress on vintage cycles, should be kept together in a group to increase public enjoyment and minimise traffic disruption".

London to Brighton not affected

The London to Brighton bike ride will still enjoy police support to protect its 30,000-odd riders at the most dangerous junctions, but while rides like the Tweed Run, with its 600 attendees, were once marshalled across junctions, enabling the ride to proceed in one group, this will no longer be the case. At this year's event hundreds of riders straggled out across the capital's streets amid at times heavy traffic.

Tweed Run organiser, Ted Young-Ing, said: "We don't feel that our event was negatively affected. TfL's guidelines were strict, but in keeping with what should be expected of an event being organised in a major city like London.

"Our only concern was that we found out about this very late in the process (as we're the first bike ride of the year, we are the first bike ride to come under the new TfL jurisdiction) but of course we were happy to follow all instructions and to incorporate all of TfL's suggestions. We look forward to working closely with them to produce a smooth-running and exciting event in future years."