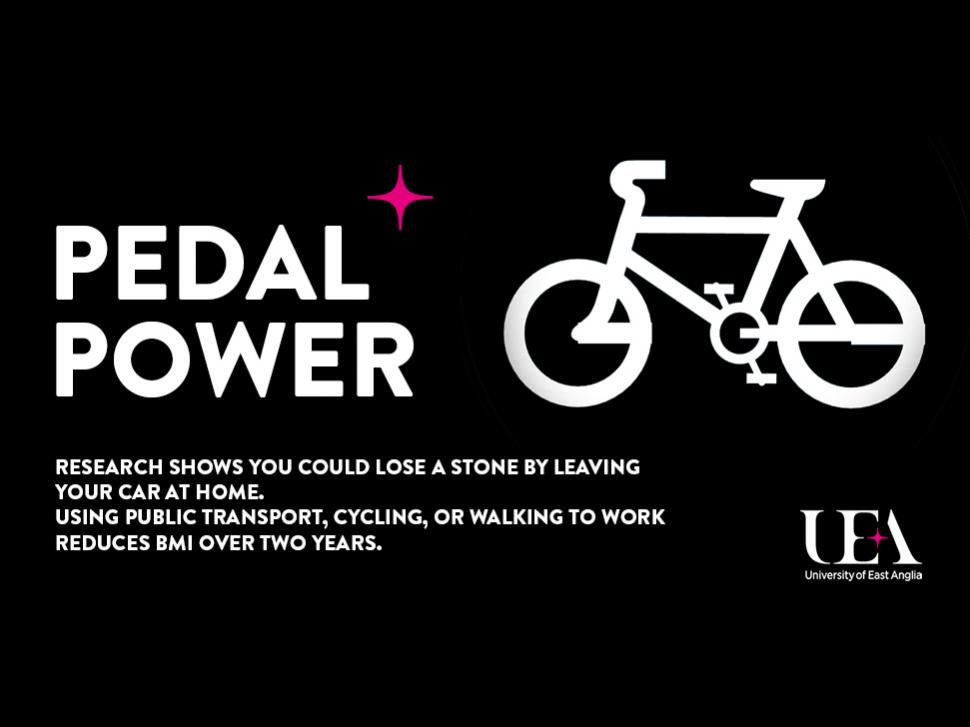 It's often claimed that people who start commuting by bike lose a stone of weight in the first year. That's just been broadly confirmed by a new study, though there's a caveat: you need to be riding for more than 30 minutes each way.

The research by the University of East Anglia (UEA) and the Centre for Diet and Activity Research (CEDAR) shows that making a change from driving to work to cycling, walking or even using public transport results in the average person losing about 1kg (2lb). Longer commutes are much more beneficial, though, with members of the test group losing around 7kg (16lb).

Lead researcher Adam Martin, from UEA’s Norwich Medical School, said: “We found that switching from the car to walking, cycling or public transport is associated with an average reduction of 0.32 BMI, which equates to a difference of about 1 kg for the average person.

“This might sound like a relatively small proportion of their total weight, but we also found that the longer the commute, the stronger the association.  For those with a commute of more than 30 minutes, there was an average reduction of 2.25 BMI units, or around 7 kg (over one stone) for the average person.”

The research team, from UEA, the University of Cambridge and the University of York, based their findings on the responses of more than 4000 adults in three annual waves of the British Household Panel Survey (BHPS) collected between 2004 and 2007.

Commuters reported their usual main mode of travel to work each year, and their height and weight in the first and third years. The researchers then used a series of analyses to see if changes in mode of transport were linked to changes in weight over time.

Martin said: “This study highlights the potential to contribute to reducing the average weight of the population by helping commuters build regular physical activity into their daily routines through walking, cycling and using public transport on their journey to work.”

The research team also found that switching to using a car to get to work was associated with a significant average increase of 0.34 BMI units.

“The key feature of this study is that we were able to compare changes in weight over time between commuters who had, and had not, changed how they travelled to work. However it is an observational study, so we can’t draw definitive conclusions about cause and effect.

“Combined with other potential health, economic, and environmental benefits associated with walking, cycling and public transport, these findings add to the case for interventions to support a larger proportion of commuters taking up these more sustainable forms of transport.”

The finding goes against the recent claim that exercise is ineffective in fighting weight though that finding was hotly disputed by experts and the journal that published it has suspended the paper.

It's yet another piece of evidence for cycling advocates to use to argue the importance of making it safe and easy for people to ride.

Philip Insall, director of health for active travel transport charity Sustrans said: “With one in six deaths being linked to physical inactivity, lack of exercise is as dangerous as smoking.

“This is why the new Government needs to urgently invest in walking and cycling. Making our roads safer so that people feel able to get out of their cars and onto bikes will have a radical impact on obesity rates. Creating a happier, healthier population which places less strain on an already stretched NHS.

“We know that people who walk and cycle short trips have very much lower rates of disease and premature death. So it’s vital to invest in infrastructure that allows people to walk and cycle in safety.”

The paper, Impact of changes in mode of travel to work on changes in body mass index: evidence from the British Household Panel Survey, is published in the Journal of Epidemiology and Community Health today.