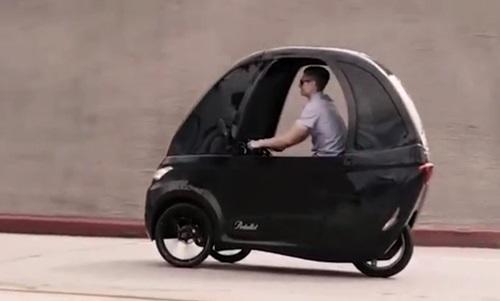 “For many urban commuters, a car is too much of a commitment and in many cases a bike is less than sufficient,” say Virtue Cycles. They believe that their new creation, The Pedalist, fills that gap. Attempting to launch via Kickstarter, they had at the time of writing raised under $5,000 of a $100,000 goal with 25 days to go.

Bringing to mind a kind of upmarket auto-rickshaw, the Pedalist is billed as: “Electric bicycle + cargo bike + tadpole tricycle + velomobile.”

With a 750W electric motor and a 48v 32A li-ion battery, it is said to offer a range of over 50 miles per charge on electric power alone with a pedal-assist mode obviously adding to this. A ‘pure pedal’ mode is also available.

The vehicle can also accommodate passengers. A second adult can sit behind the cyclist while a bicycle’s toddler’s seat can be attached in the front cargo space, which the designers say “would also fit a medium sized pet”.

One of the major selling points seems to be that at just 90cm wide, it can fit in a cycle lane. It can even go through your front door, say the designers – although their front doors are presumably wider than this writer’s.

With two wheels at the front, the Pedalist offers obvious stability, a full set of lights ensure visibility, while the enclosed shell keeps you dry. If it goes into development, the full retail price would be $4,499 (around £3,000), and there would also be a version available without the electric motor and battery for $3,499 (around £2,300).

The Pedalist bears a degree of similarity to the Babel Bike which we reported on earlier in the month. Also being crowdfunded, in this case via Indiegogo, the Babel Bike has now attracted £16,000 of its £50,000 investment target.

A project of Crispin Sinclair, the son of the famous inventor Sir Clive Sinclair, the Babel Bike also features an electric motor, but its main selling point is the designers’ claim that it is the safest bike ever created. Featuring roll bars and a seatbelt, it has been tested against a 38-tonne truck and was apparently pushed by it, not crushed.