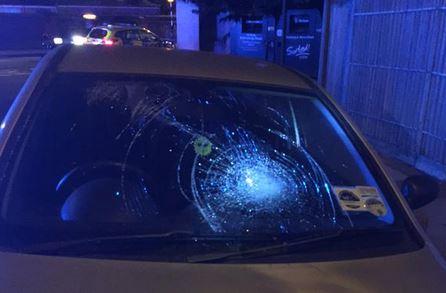 Police in London have been accused of victim-blaming and branding all cyclist as law-breakers after a picture of a car with a smashed windscreen appeared on Twitter with the caption, “Cyclists: Stop ignoring the rules or you could end up in an incident like this.” The tweet has since been deleted, and police have told road.cc they did not mean to cause offence.

The picture was tweeted from the account of the Metropolitan Police in Hammersmith & Fulham at 2.55am on Saturday morning.

The tweet was deleted shortly after road.cc contacted the Metropolitan Police at lunchtime today whether there was a specific incident that prompted the tweet - they say there wasn't - as well as whether they considered it appropriate. Before it was deleted, Twitter user Alex Oates took a screengrab. 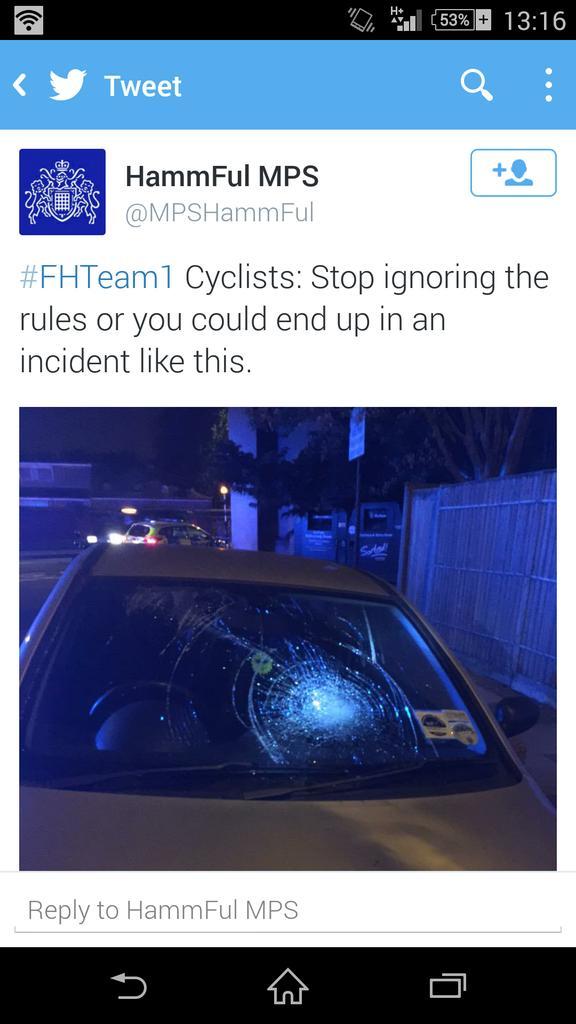 A subsequent tweet on the borough policing team’s Twitter feed, sent at 4.57am, read, “Advice for drunk people: cycling the wrong way along a road or sleeping in buses or just being a general nuisance isn't a good idea.”

The first tweet attracted strong criticism from cyclists on Twitter. Here’s a selection, beginning with Alex Ingram, co-ordinator and vice-chair of hfcyclists, the Hammersmith & Fulham branch of the London Cycling Campaign.

@mpshammful …are you trying to tell me that was in any way my fault? And as it happens I have to file a complaint as collision not recorded.

.@MPSHammFul Want a list of cases I've followed with the exact same result and worse when the victims *have* followed the rules? It's long.

.@MPSHammFul what's next, a pic of a tearful girl in a ripped skirt and a "here's what happens when you drink too much" warning? shameful.

So @MPSHammFul post an outrageously inflammatory victim-blaming picture tantamount to threatening cyclists and then delete it quietly.

Motorists! Stop ignoring rules or you could end up in an incident like this. https://t.co/IAT525cbOg pic.twitter.com/zLi9WktJv5

In a statement issued this afternoon, the Metropolitan Police told road.cc:

Hammersmith and Fulham Police are working to keep all road users and pedestrians safe.

Officers from Hammersmith and Fulham would like to assure the community that crime prevention and safety messages are not aimed at any particular group but are a general reminder provided purely to keep them safe on both roads and footways.

Any offence caused to cyclists by the tweets posted by Hammersmith and Fulham Police last night was not intended. Our focus is always to ensure that those living, working, visiting and travelling through our borough can do so in safety and with confidence.

The image shown in the picture does not relate to a particular incident reported on the borough.

The tweet concerning behaviour following alcohol consumption was not directed at cyclists but general advice to anyone planning to drink alcohol.

Twitter users have noted that the assertion that road safety advice isn't directed at a particular group conflicts with the tweet sent in the early hours of this morning.

@MPSHammFul then don't aim them at one particular group. Your cyclist-head-smashing-windscreen one was aimed at cyclists heads. Woeful.