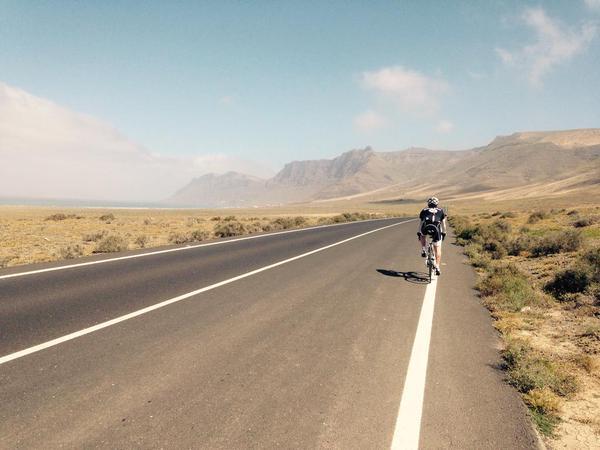 #mycyclingweekend 4: It may be March but spring hasn't sprung just yet…

Icy beards, rainy rides, and a distinct lack of daffodils… even Lanzarote had a kick to it. It all went a bit epic this weekend
by Elliot Johnston

Our cycling weekend wasn’t quite as springy as we expected. And, going by your photos, those of you who are also in the UK had a distinctly daffodil-less #mycyclingweekend too.

Despite the drizzle and the disappointment that the first of March didn’t bring with it sunshine, lambs, and the first of many balmy afternoons, there was still a strong showing from you guys, and a lot of photos in the #mycyclingweekend coffers. In fact, the close-to 200 photos that we received from those of you who braved the cold - and now unseasonal - conditions, made us feel better about our distinctly damp rides. It looks like we weren’t alone with our optimistic expectations either.

Graeme Moore made us feel better about our choice of attire by showing his meteorological naivety on Twitter by expressing his confusion that the winter gloves he left in his drawer at home were failing to keep his hands warm.

Can't understand why the waterproof gloves I left in the drawer didn't keep my hands warm #mycyclingweekend pic.twitter.com/ZcOZ3eS6lR

Not everyone went so poorly prepared, though. Twitter user Josh Heaton combined a sensational sense of style, with a little bit of showing off, when he posted his preparation pic. Check out his threads.

Seems like a good day to go turn myself inside out #mycyclingweekend pic.twitter.com/uljZMNosoN

The weather wasn’t much better for Instagram user @letourdattack‘s rather lonely looking 100km London to Brighton ride, nor in Poland where evvopaul’s beard froze. Oh, the things we put our bodies through for a decent ride, eh?

A photo posted by @letourdattack on

A photo posted by Paul Evans (@evvopaul) on

Without suggesting that the riders above who braved adverse weather conditions did so in vain, some were more successful in their endeavours than others. Not many as successful as our very own Dave Atkinson however, who topped off a six month transformation with a second place in his final Cat 4 race. It was his final Cat 4 race because he’s managed to gain enough points for a ten-month early promotion to Cat 3. You can read more here, but for now you can just check out this fantastic picture which was taken by Huw Fairclough

Some of you chose to stay indoors away from your bike, but others stayed indoors to get even closer to the action. The Revolution Series took place at the Olympic Velodrome this weekend, and Instagram user @joe_fisher777 got very close to the action.

A photo posted by Joe Fisher (@joe_fisher777) on

We also received some great group shots, and a few other beautiful pics from Instagram users @eachann.gillies, @fairseccyclist, and @phil1066, as well as Twitter user @bluemcardle.

Tough but fun 100km on the fixed gear today.

All of the photos that were sent our way this week are ready available to you by searching for the #mycyclingweekend hashtag on your social network of choice. It’s also worthwhile checking out our Facebook posts at the end of last week reminding you to share your photos with use. Enjoy.