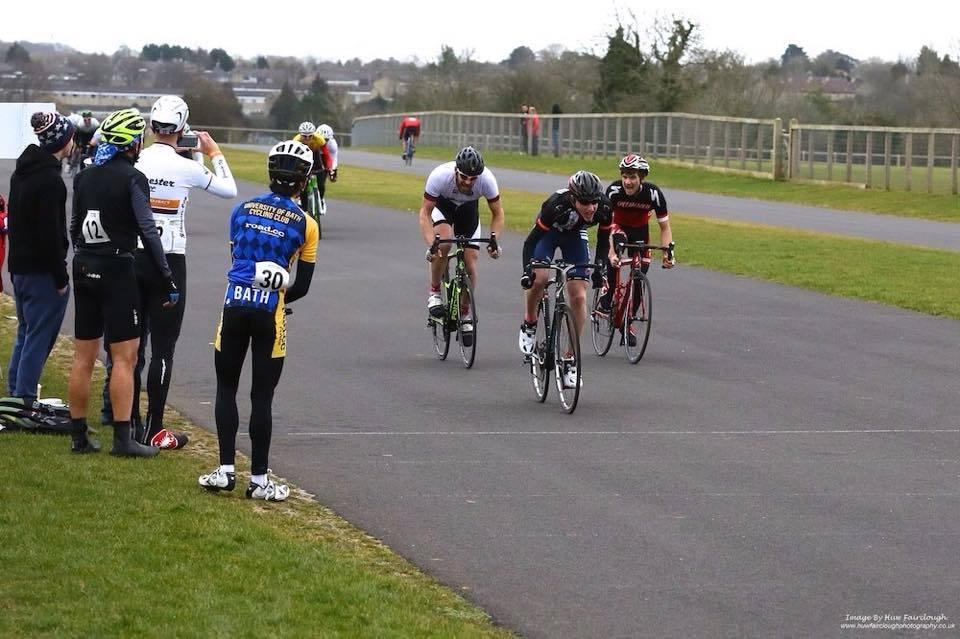 It all went right this time.

A full field for the 4s at Odd Down yesterday and I snuck in as first reserve, number 41 in a field of 40. I wouldn't say that my preparation was perfect: I woke up at 4am that morning outside Frankfurt with a bit of a hangover and an early flight to catch, and I didn't get home until after 11. The legs didn't feel that special on my quick (read: inadequate) warm up. But anyway, up we lined and off we rolled for our forty minutes and three laps.

Wind's a big factor at Odd Down. It's always windy and hiding from it for as long as possible is crucial for saving your legs. Unusually it was from the south rather than the west, which is a bit kinder: it means that the sprint out of both hairpins is with a tailwind, and the only long section into the wind is the bottom straight before the hairpin, which is at the bottom of the hill so you're carrying plenty of speed.

You get to know a circuit after a while. I read the wind better yesterday and decided on three things. Firstly, a couple of extra seconds of effort after the top hairpin, over and above just sprinting to stay on, was worth quite a few places as you carried some extra speed on the downhill straight. That's nearly always the case at Odd Down but it seemed especially so yesterday, probably because of the wind direction. If you know you can make up places there there's less need to hurt yourself on the uphill straight back up to the top.

Secondly, finding a wheel at the bottom turn to the hairpin was crucial because you really didn't want to be bearing the brunt of that headwind, ever. My wheel of choice was a nice chap from Gloucester City CC (good to see those boys out in force yesterday) on a Giant Propel. Partly because he was tall, and a good wind shield – I know people follow me for the same reason, so I'm okay with that – and partly because his bike made a lovely sound. Which took my mind off other things, like the fact that my heart was trying to burst out of my chest.

Thirdly, the place to be on the home straight was on the right, as the other riders blocked the wind and you could more or less coast a couple of places. This worked pretty well until two riders had a coming together there and went down, which required a bit of cyclocross on my part to avoid. The plus side of that was that after the stack everyone voted themselves a bit of a rest: the pace dropped by about ten seconds a lap and I had a chance to recover before the 3 laps went up on the board.

Up until then I'd been keeping myself pretty well hidden, aiming for somewhere between 10th and 20th position. There's the risk of missing a break if you're back there but it never really looked like a day when one would stick. At three laps my plan was to move up to top five and try and stay there and take my chances in the sprint, rather than try some kind of daft death-or-glory dive off the front like last time. A couple of riders tried to steal a march on the last three laps but they never got very far, and come the bell the race was still more or less together and I was where I wanted to be.

I don't really remember who I was following on the run down to the bottom hairpin. But I do remember thinking as I came round that last slow turn: someone will come past me on the inside along the bottom straight, and they're the wheel I need to follow. And they did, and I did, and turning for home I was third man on the road. So there was nothing left but to open it up and see if the legs would last until the line. It's a fairly long sprint from the bottom corner and I've never managed to go full gas all the way. But this time the legs did as they were told and I managed to overhaul the chap in second place about five metres from the line. Congratulations to Jack Thompson of Performance Cycles for the win. I wasn't going to catch him.

Eight points, then. Taking me to 14 which is two more than the 12 I needed to move up to Cat 3. So up I go, and there ain't no going back. Given that this was my season's goal, I get 10 months off now. Either that or make some new goals, I guess.

Big thanks are due to Dave Smith in all of this. It's less than six months since I asked him to sort me out and in that time I've gone from sprinting for last to sprinting for first, and I'm 12kg lighter and a whole lot fitter. If you want to spend money on making your riding faster, forget that carbon bottle bage: a proper training plan is the best upgrade you can buy. By miles.

Thanks to Huw Fairclough for permission to use the image